The discrimination is behavior directed at someone just because they belong to a particular group. It is an observable behavior, it refers to the manifest acts of the people towards the members of the groups.

Two of the most widespread types of discrimination are racism when this behavior is directed towards a racial group and who carries it out is called racist. And sexism when it is based on sex and whoever is sexist is called. It is usually stereotypes and prejudices that lead to discrimination.

The prejudice is defined as an attitude, usually negative, toward members of a group. It is the evaluation of someone based on their race, sex, religion or simply because they belong to another group than their own.

The stereotypes are beliefs that group members share a particular characteristic, can be positive or negative.

They represent the knowledge that is had about the members of certain groups, although it is known that this knowledge is false. For example, older people are weak, Americans suffer from obesity, or Germans are not friendly.

There have been numerous investigations to study the concept of discrimination and its possible causes. They have found different factors, each of them are sufficient but none necessary, so that discrimination ends up producing: motivational, sociocultural, personality and cognitive.

Next we will see carefully what each one of these factors and its different components consists of.

From this approach, discrimination is the result of tensions, emotions, fears and needs of the subject. This behavior serves to reduce negative emotional states or satisfy basic needs. Within the motivational factors we can distinguish:

Some researchers point out that discrimination, just as prejudices are learned. This information learned usually comes from three different sources:

Different studies have concluded that there is an authoritarian personality type, and that more authoritarian individuals tend to be more racist. In this way it has been shown that personality factors can also influence whether a person uses discrimination or not.

Like the others, it is not a determining factor. It may happen that an individual has an authoritarian personality but never gets to practice discrimination.

The belief that a group possesses negative characteristics generates dislike towards it and therefore discriminatory behaviors. The main component in this case is the negative prejudices about that group. For example, a fundamental aspect of the Nazi campaigns against the Jews was the negative propaganda they spread about them.

In this way they justified the arrests and subsequent murders. They showed the Jews as conspirators, dirty and dangerous and therefore it was necessary to control them. The formation of these negative stereotypes that lead to discrimination can come from two processes:

These prejudices are once again often learned from parents, peers and institutions. They are also acquired through the experiences that have been experienced with this group that is generalized to all members.

Therefore, biases or errors in processing information strengthen negative beliefs or stereotypes about a group even if they are erroneous. 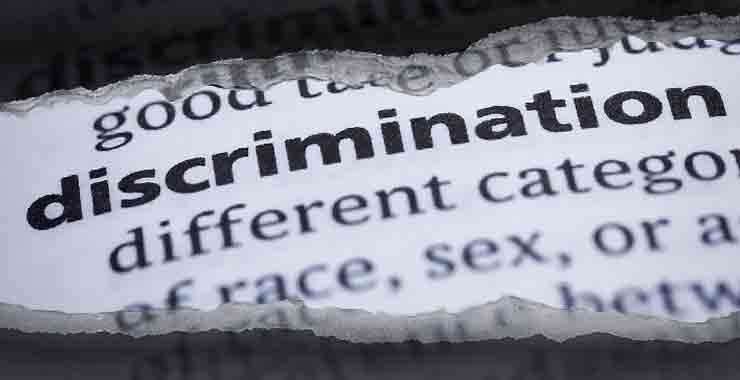 We can list consequences of discrimination at different levels:

1- For the victim or target of discrimination

In the first place, the members who belong to a minority on what the discrimination is exercised are objectively worse than they would be if there were no such prejudices against them. They have a psychological, economic and physical impact.

Some studies have indicated that belonging to a minority can be a risk factor to develop some mental illnesses such as depression or anxiety. In addition, members of minority groups have fewer jobs, have more difficulties in accessing a job, are less prestigious positions and have lower salaries than members of the majority.

On the other hand, individuals who belong to minority groups are more likely to be victims of the violence of the subjects that are part of majority groups.

2- At the community level

Discrimination affects different areas of society, in many cases preventing their own growth because there is a social fracture and prevents the benefits of diversity.

In addition, the group tends to be marginalized, avoiding contact with them and being excluded from society. Usually this marginalization results in more serious problems such as the formation of gangs that engage in illegal and criminal acts.

Discrimination also generates in people a series of negative attitudes and behaviors such as anger and aggression against members who do not belong to their group.

On many occasions this leads to verbal and physical violence among members of different groups that can have very serious consequences such as murder.

As we have seen, discrimination has very different causes and that is why it seems complicated to eliminate discrimination and negative prejudices completely.

But there have been numerous studies aimed at reducing them and several techniques that may be useful for this have been pointed out.

At the end of the 80s Devine made a series of investigations that indicated that even the subjects that in principle do not have prejudices, sometimes had discriminatory behaviors or thoughts because there are a series of prejudices that are acquired unconsciously.

On the other hand, from these same investigations, he concluded that individuals without prejudices consciously control their thoughts about the minority group, although they know what the negative stereotypes of that minority are, do not believe in them and do not use them to discriminate against them.

So this author indicates that the inculcated prejudices can be overcome, although it requires an effort of attention and time because it will not happen automatically. It is about consciously controlling the effects of stereotypes on the judgments about minority groups.

But laws can guarantee that members of minorities are not treated in different ways, and laws against discrimination reduce the frequency and severity of these acts.

Another function of the laws is to establish norms and indicate what is acceptable and what is not in a society. To the extent that the individual understands that discrimination is not accepted in their environment will be less likely to undertake these acts.

Over time, non-prejudicial attitudes are internalized, because these behaviors become routine, non-discrimination becomes a habit. Do not stop exercising for fear of the laws if not because the person already understands it as a behavior that is not correct.

As Pettigrew states, the contact hypothesis states that contact between members of different groups leads to more positive attitudes towards one another. This contact will serve so that the people of the majority group prove that the stereotypes that exist about the minority group are not correct.

Although it has also been seen that this contact has to have a series of characteristics to be effective against discrimination. These requirements are, above all, that the context in which the meeting takes place is one of cooperation between the members of both groups and that the individuals have an approximate social position.

It is also advisable that this contact begins to occur at an early age because children can more easily modify their prejudices than adults who have had a certain belief for years.