The erythrophobia or ereutofobia  is an anxiety disorder that is characterized by an irrational, extreme and unjustified to the fact blushing fear.

People who suffer from this disorder have a phobic fear of any situation that may cause them to blush on the face, and experience the typical symptoms of blushing.

The fear of these situations causes a marked response of anxiety every time the person blushes. In this way, erythrophobia can be highly annoying and unpleasant.

In addition, in order to avoid the fear and anxiety caused by blushing, the person can adopt a lifestyle in which is permanently pending the possibility of blushing.

Thus, erythrophobia, although it may seem a minor psychopathological alteration, is a highly annoying disorder that can significantly limit the lives of people.

Erythrophobia is an anxiety disorder known as a specific phobia. These alterations, which are correctly established in the diagnostic manuals of psychiatry, are characterized by presenting phobic fear towards a specific element.

The elements or situations feared in specific phobias can be multiple. From animals such as spiders, to specific situations such as heights or closed spaces.

In the case of erythrophobia, the element feared is the blush or the situation blushes at certain times.

Blushing is a physical response that many people can experience. This consists of the redness of the face in an involuntary and uncontrollable way.

Redness of the face usually occurs when the person experiences some type of emotion related to shame or fear. In these moments, the organism responds by means of a vaso-compression of the facial blood vessels.

Socially, blushing is immediately associated with the emotions that cause it. For this reason, when someone blushes it is usually interpreted automatically that this person is experiencing feelings of shame.

The fact of blushing is an answer that is not usually pleasant for people. In fact, most individuals who blush would prefer not to.

This fact is explained through the expressive and informative component that the blush has. When a person blushes, he immediately expresses the feelings and emotions he is experiencing at that moment.

People may have a greater or lesser predisposition for the expression of their emotions. But it is always preferable to express them voluntarily and in a controlled manner.

These two components are not present in the response of blush, since this occurs automatically and totally uncontrollable.

In addition, the emotions of embarrassment or shyness that cause blushing are often unwanted. So often people prefer to hide their emotions when they blush.

However, the fact of blushing does not constitute a pathology. It results in a totally normal physiological reaction and does not manifest any type of alteration.

In fact, wanting to avoid blushing or experiencing dislike for these situations is not a pathological aspect either.

Therefore, in order to associate blushing with erythrophobia and, therefore, with a psychopathological alteration, a series of requirements must be met. These fall mainly on the characteristics of fear that is experienced. 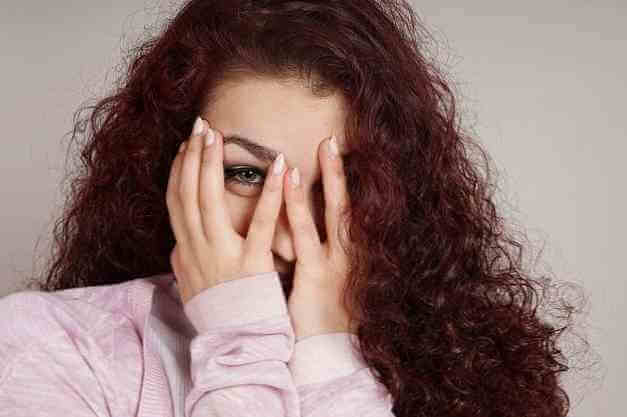 All the people can present a more or less elevated displeasure towards the blush. Likewise, they may fear blushing in specific situations due to the image of themselves that they will project.

However, in erythrophobia, the fear experienced by the blush goes much further. The person is afraid of these situations in an excessive way and their response of fear is totally unsuited to the real demands of blushing.

The individual with erythrophobia usually interprets the fact of blushing as something highly negative, harmful and unacceptable. In fact, when he experiences it he panics due to the high fear he has towards these situations.

The non-pathological fear of blushing is measured by rational thought processes. For example, a person may fear blushing when they have an important appointment, for fear of the other person knowing that they are nervous or insecure.

However, this type of fear of blushing does not define the presence of erythrophobia either. The fear experienced in this anxiety disorder is totally irrational.

This means that the person can be highly aware that there is no reason to experience such a high fear of blushing.

The individual with erythrophobia may come to the conclusion that his reactions are excessive and that it would be more beneficial for him not to be so afraid of blushing.

Although the person with erythrophobia may be aware that their fear is irrational and unjustified, it continues to present invariably.

This fact occurs due to the uncontrollability of the fear towards the blush. The subject is totally incapable of controlling his manifestations of fear towards these situations.

The fear of erythrophobia is neither temporary nor occasional. Rather the opposite, it persists over time permanently.

On occasion, people may fear blushing because of the determined consequences that may result.

However, the fear of erythrophobia is not props. The individual with this psychopathology is afraid to blush in any type of situation invariably.

The fear of erythrophobia is so high that it motivates avoidance in the person who suffers it. This means that the individual with this psychopathology can begin to avoid any situation in which he may blush.

This factor is one of the most relevant of the disorder, since it allows establishing its diagnosis and defining the magnitude of the repercussions on the person.

In fact, the avoidance behaviors that a person with erythrophobia usually performs can be very numerous. There is not a single situation in which the individual can blush, but there are multiple scenarios that the person can begin to avoid in order to also avoid the anxiety caused by the blush.

Erythrophobia poses an important differentiation with a well-known disorder that is similar but at the same time different, social phobia.

The social phobia refers to an anxiety disorder in which the person fears of excessive, irrational, uncontrollable and permanent form of social situations.

The type of fear experienced in both disorders is the same. A phobic fear is connoted in both erythrophobia and social phobia.

However, both psychopathologies are differentiated by the feared element, that is, the object that produces both the fear response and the manifestations of anxiety.

In social phobia, the feared element is social situations, the relationship with others and relational interactions. On the other hand, in erythrophobia the dreaded element is the physiological reaction of blushing.

It is true that the blush appears in social situations. For this reason, both disorders can be confused. In both erythrophobia and social phobia, one can experience fear in similar situations.

However, in erythrophobia, fear is clearly associated with the possibility of blushing, an aspect that is not major in social phobia.

The fear of blushing is not the only important element of erythrophobia. In fact, what makes it an anxiety disorder is the symptomatology that derives from pathological fear.

In this sense, the typical symptoms of erythrophobia are related to the anxiety responses provoked by the feared elements.

When the person with this disorder is exposed to situations in which he can blush, he responds with a marked response of anxiety. This is usually high and severe, but usually does not end up developing an anxiety attack.

The typical symptoms of erythrophobia affect three different components of the person: the physiological plane, the cognitive plane and the behavioral plane.

The first symptoms that appear in erythrophobia are the physical manifestations. They arise when the individual blushes and cause high discomfort.

The physical alterations that this disorder can cause can vary considerably in each case, so there is no single clinical pattern.

In fact, physiological symptoms can comprise any of the following manifestations:

1. Increase in the cardiac rate.
2. Increase in the respiratory rate.
3. Palpitations or tachycardia.
4. Sensation of suffocation or hyperventilation.
5. Dizziness and nausea.
6. Muscular tension
7. Generalized excessive sweating.
8. Pupillary dilation.
9. Headaches and / or stomach.
10. Sensation of unreality, depersonalization.

Cognitive symptoms refer to the thoughts developed by the person with erythrophobia regarding blushing. These can be very variable but always have negative and anxious characteristics.

Thoughts as if I blush I will seem an undesirable person, nobody will love me, all will reject me or I will make a fool of myself are some of the thoughts that a person with erythrophobia can develop.

These thoughts are usually present constantly in the mind of the individual. However, they become much more intense when the person blushes.

The intensity of the two previous symptoms is very high, a fact that causes a considerable discomfort on the person. This discomfort is so marked that it directly affects behavior.

In fact, one of the main symptoms of erythrophobia is precisely this, the repercussion that the fear makes on the person’s behavior.

In this sense, the main behavioral symptoms of the disorder are: avoidance and escape.

The individual will gradually develop behavioral styles that allow him to avoid any situation in which he can blush. Through these mechanisms the person will manage to avoid the anxiety and discomfort that he experiences when he blushes.

Likewise, as it is often complicated or impossible to avoid the appearance of blushing, the person with erythrophobia will escape every time he blushes, to avoid others seeing him blushing and reduce his level of anxiety.

The element that seems to have a more direct relationship with the development of fears is conditioning. Fears are learned emotional reactions that can be acquired through the different experiences lived by the person.

In this sense, direct conditioning seems to play an important role in erythrophobia. For example, having suffered teasing or continuous reproaches in situations of blushing, especially during childhood and adolescence, may contribute to the development of phobic fear.

However, this is not the only factor that has been associated with specific phobias. Vicar conditioning (observe rejection of blushing) the acquisition of negative information about blushing, genetic aspects and cognitive factors can also contribute to the development of erythrophobia.

The first choice interventions for the treatment of erythrophobia is psychotherapy, which has shown much higher efficacy rates than drug treatments.

Specifically, the intervention that allows to overcome the erythrophobia and suppress its symptoms is the cognitive behavioral treatment.

This type of intervention focuses on the main element that maintains phobic fears, that is, avoidance. In this way, through a hierarchy of graduated stimuli, the therapist gradually exposes the individual to their feared elements.

In the case of erythrophobia, the therapist will create situations in which the person blushes, so that they get used to them, overcome their fear towards them and learn to control situations that cause blushes.