When you have a panic attack what Causes of Panic Attacks you feel a sudden experience of intense fear or discomfort, accompanied by symptoms such as:

After going to sleep, she wakes up with a slight feeling of apprehension, feeling strong heartbeats and chest pain. Feel that you are dying or are having a heart attack. In addition, you feel a sense of unreality; As if she were not in control of herself.

There are 3 kinds of panic attacks:

Isolated attacks can be done without worry. However, when attacks occur frequently, panic disorder may be developing.

Panic attacks often appear when you are away from home, although they can occur anywhere and at any time.

Usually the signs and symptoms increase and reach their peak at 10 minutes. Most end at 20-30 minutes of their start and rarely last more than an hour.

A panic attack includes a combination of the following signs and symptoms:

You can feel an isolated panic attack without other complications or episodes. If you’ve only had one or two, you would not have to worry.

However, if these attacks occur frequently you can develop panic disorder. This is characterized by repeated panic attacks, combined with major changes in behavior.

You can have panic disorder if:

If you have panic disorder, attacks can result in a high emotional cost; Although the attacks can last only a few minutes, the memory of them can be intense and can influence self- esteem and impair the quality of life.

As they develop, these symptoms appear:

The types of emotional reactions that occur in panic attacks do not have a single cause, but several: biological, psychological, environmental and social.

The tendency to be nervous or tense may be hereditary, but also influence your sense of control over the world (something learned), your environment and your social circumstances.

If there is a tendency in your family to “be nervous,” you will be more likely to inherit that trait.

It is not that there is a single gene that predisposes to anxiety. Rather, the influence is due to a set of genes.

That is to say, there are many genes that produce the tendency to be too anxious.

In addition, those genes will affect the development of your anxiety when you meet a number of psychological, environmental and social factors.

For example, it is known that adolescents who smoke more cigarettes are more likely to develop anxiety disorders when they are adults, especially generalized anxiety disorder and panic disorder.

The fear you feel in panic attacks can be the result of conditioning or learning.

According to this model, in childhood or adulthood you would have developed an uncertainty about your ability to control and cope with events.

The feeling of lack of control is the most vulnerable factor to anxiety: you may feel that you will do poorly in a presentation or that you will suspend an exam no matter how much you study. 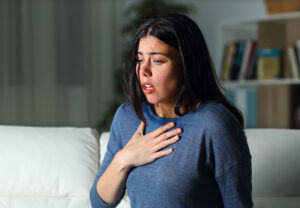 There are many studies that support the influence of parental education on children’s sense of control:

Another psychological factor is cognitive conditioning:

That way, when you feel the external or internal signals, you have the sensation of fear, although not of the real dangerous situation.

This learning or conditioning can be difficult to separate because the keys that trigger the emotional responses of fear may be unconscious.

This association of panic attacks to internal or external signals is called learned alarms.

Cultural or social customs such as having to excel at work, college or college can also contribute to the development of anxiety or panic attacks.

Different vital circumstances, such as examinations, divorces or family deaths, act as stressors that can trigger reactions in you such as panic attacks or headaches .

Temporary and isolated appearance of intense fear or discomfort, accompanied by four (or more) of the following symptoms, which begin abruptly and reach their maximum expression in the first 10 minutes:

Cognitive behavioral therapy is the most effective way to treat this disorder. It is based on modifying the patterns of thought and behavior by more adaptive ones.

To address panic disorder, the strategy may be focused primarily on education about the disorder itself and on learning techniques:

It is about teaching the person what happens and why it happens.

Some aspects to teach are:

The techniques to be taught are:

The goal is to identify catastrophic irrational thoughts and to change them by more positive interpretations.

Medication can be used temporarily to reduce some of the symptoms of panic disorder.

However, it alone does not solve the problem, it is especially recommended in the most severe cases and is most effective when combined with cognitive-behavioral therapy.

The physiological process of a panic attack can be understood as follows:

Some Tips for Attacks or Panic Disorder