The prenatal and postnatal development of our nervous system (SN) follows a very complex process based on numerous neurochemical events, genetically programmed and actually susceptible to external factors, such as environmental influence.

Diseases of the nervous system

When a congenital malformation occurs, the normal and efficient development of the cascade of developmental events is interrupted and diseases of the nervous system may appear. Therefore, structures and / or functions will begin to develop abnormally, having serious consequences for the individual, both physically and cognitively.

The World Health Organization (WHO) estimates that approximately 276,000 newborns die during the first four weeks of life as a result of some type of congenital disease. Highlighting their impact on the affected, their families, health systems and society, heart malformations, neural tube defects and Down syndrome.

Congenital anomalies involving central nervous system disturbances may be considered a major cause of fetal morbidity and mortality (Piro, Alongi et al., 2013). They may account for approximately 40% of infant deaths during the first year of life.

In addition, these types of anomalies are a major cause of impairment of the functionality in the child population, resulting in a wide variety of neurological disorders (Herman-Sucharska et al, 2009).

Congenital malformations of NS comprise a very heterogeneous group of abnormalities, which may occur in isolation or as part of a major genetic syndrome (Piro, Alongi et al., 2013). Approximately 30% of cases are related to genetic disorders (Herman-Sucharska et al, 2009.

Types of diseases of the central nervous system

However, the time of exposure to the anomalous process or external harmful agent is essential, since the earlier the exposure, the more serious the consequences. The most critical moment is the period from the third to the eighth week of gestation, where most organs and brain structures develop (Piro, Alongi et al., 2013). For example: 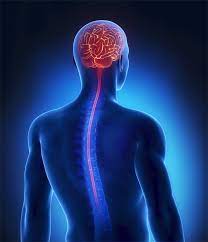 Dividing the development of the embryo in different periods, the causes that would affect the formation of the SN are the following:

In addition, congenital abnormalities can appear either at the cranial, encephalic or spinal level.

Thus, depending on the time of occurrence, the duration and intensity of the noxious exposure will produce different morphological and functional lesions (Herman-Sucharska et al, 2009).

The fusion of this structure usually takes place around days 18 and 26 and the caudal area of ​​the neural tube will give rise to the spine; The rostral part will form the brain and the cavity will constitute the ventricular system. (Jiménez-León et al., 2013).

Alterations in neural tube formation occur as a consequence of a defect in its closure. When a general failure of neural tube closure occurs it occurs the anencephaly . On the other hand, when a defective closure of the posterior area occurs, it will lead to affections such as encefelocele and hidden spina bifida.

Spina bifida and anencephaly are the two most frequent malformations of the neural tube and affect 1-2 of every 1,000 live births (Jiménez-León et al., 2013).

The Anencephaly is a fatal disorder incompatible with life. It is characterized by an abnormality in the evolution of the cerebral hemispheres (partial or complete absence, together with partial or complete absence of the bones of the skull and the scalp (Herman-Sucharska et al, 2009). Weeks and show some reflexes of suction, Moor or spasms (Jiménez-León et al., 2013).

We can distinguish two types of anencephaly depending on their severity:

In the encephalocele,  there is a tissue defect of the mesoderm with a herniation of different brain structures and their covers (Jiménez-León et al., 2013). Within this type of alterations we can distinguish: bifid skull, encephalomeningocele (protrusion of the meningeal layers), anterior encephaloceles (ethmoid, sphenoidal, nasoethmoidal and frontonasal), posterior encephaloceles (Arnol-Chiari malformation and abnormalities of opcicipito-cervical junction ), Optic abnormalities, endocrine abnormalities and cerebrospinal fluid fistulas.

In general, these are alterations in which a diverticulum of the brain tissue and the meninges protrude through defects in the cranial vault, that is to say, a defect of the brain in which the coating and the protective liquid are left, forming a Protrusion in both the occipital region and the frontal and sincipital region (Roselli et al., 2010)

Typically, the term spina bifida is used to characterize a variety of abnormalities defined by a defect in vertebral artery closure, affecting both superficial tissues and structures of the spinal c@nal (Triapu-Ustarroz et al., 2001).

The hidden spina bifida is usually asymptomatic. The case of the open spina bifida is characterized by a defective closure of the skin and gives rise to the appearance of the Myelomeningocele . In this case, the spinal line of the spine and the spinal c@nal are  not closed properly. Consequently, the marrow and the meninges can protrude outside.

In addition, spina bifida is frequently associated with hydrocephalus , which is characterized by cerebrospinal fluid (CSF) accumulation leading to abnormal enlargement of the ventricles and compression of brain tissues (Triapu Ustarroz et al., 2001).

On the other hand, when the anterior neural tube and associated structures develop abnormally, there will be alterations in the divisions of the cerebral vesicles and in the cranial-facial midline (Jiménez-León et al., 2013) . One of the most serious manifestations is holoprosencephaly , in which there is an abnormality in the hemispheric division of the proso-cephalus, as an important cortical disorganization.

For the proper functioning of our nervous system it is necessary that our structures reach an optimal number of neuronal cells and that in  turn are undergoing a process of cellular differentiation that accurately determines each of their functions.

When defects in cell proliferation and differentiation occur, alterations such as microcephaly, macrocephaly and hemimegalencephaly may occur (Jiménez-León et al., 2013).

It is necessary that the neurons initiate a process of migration, that is to say, that they move towards their definitive locations in order to reach cortical areas and begin their functional activity (Piro, Alongi et al., 2013).

When alteration of this displacement takes place alterations occur, in its most severe form, lysencephaly may appear and in milder forms, abnormal lamination of neocortex or microdisgenesis appears (Jiménez-León et al., 2013).

They are usually of the unilateral type and are associated with other anomalies in the nervous system such as hydrocephalus, holoprosencephaly or agenesis of the corpus callosum. Depending on the alteration that occurs, they may present asymptomatically or with mental retardation, ataxia or ataxic cerebral palsy (Jiménez-León et al., 2013).

Within the alterations of the cortical organization, polymicrogyria is an alteration that affects the organization of the deep layers of the cortex and gives rise to the appearance of a large number of small convolutions (Kline-Fath & Clavo García, 2011) .

Early detection of these types of alterations is essential for their subsequent approach. The WHO recommends attention in both preconception and postconceptional periods with reproductive health practices or genetic testing for the general detection of congenital diseases. Thus, the WHO points out different interventions that can be performed in three periods:

In congenital NS diseases, screening through ultrasound during the gestation period is the most important method for the detection of prenatal malformations. Its importance lies in its safe and non-invasive character (Herman-Sucharska et al, 2009).

On the other hand, different studies and attempts have been made to apply magnetic resonance imaging (MRI) for the detection of fetal malformations. Although it is non-invasive, the possible negative influence of magnetic field exposure on embryonic development is studied (Herman-Sucharska et al, 2009). Despite this, it is an important complementary method for the detection of malformations when there is an obvious suspicion, being the optimal moment for its realization between the 20 and 30 weeks of gestation (Piro, Alongi et al., 2013).

In the case of detection of neural tube closure alterations, this can be done by measuring α-fetoprotein levels in both the maternal serum and in the amniotic fluid through the amniocentesis technique within The  first 18 weeks of pregnancy. If a high-level result is obtained, a high-resolution ultrasound should be performed to detect possible defects early by week 20 (Jiménez-León et al., 2013).

Early detection of complex malformations and early diagnosis will be key to adequate prenatal control of this type of alterations.

Treatment of diseases of the nervous system

Depending on the functional consequences, in addition to a surgical or pharmacological approach, a multidisciplinary intervention with physiotherapeutic, orthopedic, urological and psychotherapeutic care will also be required (Jiménez-León et al., 2013)

Due to the enormous impact of congenital diseases of the nervous system, it is considered the prevention of these anomalies as an essential point within the health system. Numerous investigations have shown how different alterations respond effectively to primary and secondary prevention measures.

For example, maternal supplementation with folic acid prior to conception substantially reduces anomalies resulting from defects in neural tube closure by 50-70% (Olufemi and Dairo, 2010). Thus, prevention programs in many countries include the prescription of multivitamins with folic acid, since an intake of 400 μg / day before conception occurs and during the first 12 weeks of pregnancy prevents much of these defects (Jiménez- Leon et al., 2013).

On the other hand, the use of prenatal images such as ultrasound allows the early detection of abnormalities allowing a more effective intervention.

In addition, avoid exposure to harmful external agents such as valproic acid intake , exposure to radiation, folate antagonist intake (trimethoprim, carbamazepine, phenytoin and phenobarbital), malnutrition or alcohol consumption Jiménez-León et al., 2013), Will significantly reduce the likelihood of occurrences of alterations related to the development of the nervous system.

In general, WHO (2015) in relation to the general prevention of congenital anomalies, offers a series of guidelines that refer to primary prevention:

Congenital diseases of the NS can cause important functional consequences for the individuals who suffer them. Although many disorders can be corrected  through pediatric surgery, early detection is critical. This type of disease can have a genetic or environmental origin, and this second factor is a key point for its prevention.