The chronic alcoholism is characterized by habitual and repeated psychological difficulty to control the consumption of alcoholic beverages. A person with this addiction is highly dependent on alcohol and consumes it every day at dangerously high levels.

Usually impairment in the ability to control alcohol consumption may be intermittent and very slight in the early stages of the disease.

When you start drinking, and even during the first years of excessive alcohol consumption, the inability to stop drinking is usually not very high. 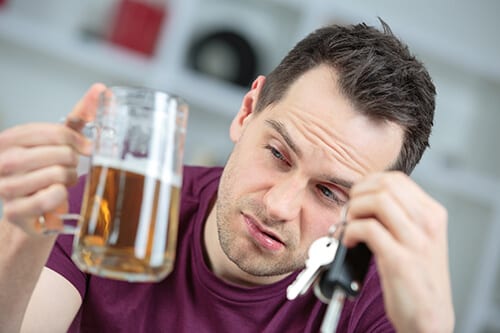 However, as the years pass and alcohol is continued in a pathological way, the inability to control consumption can become continuous and intense, leading to an absolute addiction to this substance. In this way, chronic alcoholism raises a doubt more than interesting worthy of being raised before we start to review this disease.

This question can be raised through the following question: If alcoholism is a disease that manifests a clear addiction to alcohol after many years of consumption, when does alcoholism really begin?

Obviously, to say that a person who consumes a year of chronic alcoholism is inadequate, since the consumption pattern has not yet been chronicled.

Likewise, this person who a year consuming alcohol in abundance, at this point, also does not suffer from a high addiction to the substance, so if you wanted to stop drinking would have relatively easy.

This fact gives us the option that the person who consumes alcohol for a few years is not yet an alcoholic, as he does not present a clear dependence on alcohol consumption.

Now, why does this person continue to ingest alcohol? What causes you to continue consuming for so many years until you reach a state of chronic alcoholism?

These questions are difficult to answer, since there are many factors that may play an important role in the development of this phenomenon, however, the fact that there are so many cases of chronic alcoholism raises the possibility that the initial consumption of alcohol already constitutes a first phase of the disease.

Likewise, before a person suffering from chronic alcoholism and who has been consuming alcohol in a pathological way for 30 years, his pathology cannot be understood as a new situation.

That is to say, it cannot be said that alcoholism begins at the moment that the person is observed a clear dependence on the substance, since before this happens, the person had already been consuming in a pathological way for many years.

Thus, chronic alcoholism is a disease that is established at the time that a person’s alcohol consumption can be diagnosed as chronic and shows signs of dependence on the substance, but that starts much earlier.

To be able to define exactly the concept of alcoholism, it is convenient to distinguish it and relate it to other problems related to alcohol consumption.

Differences between chronic alcoholism and other types of consumption

Consumption of alcohol risk is considered to be that which exceeds the limits of prudent consumption and increases the risk of suffering from diseases, accidents, injuries or mental or behavioral disorders.

In qualifying values, this consumption has been defined as an almost daily consumption of more than 40 grams of ethanol per day, that is, equivalent to 4 Standard Drinking Units (BUs) per day.

For the WHO Mental Illness Diagnostic Handbook, harmful consumption is that type of alcohol consumption that has already affected physical or mental health.

This pattern of consumption does not meet the diagnostic criteria of alcohol dependence, and is based on a regular consumption that is above 60 grams per day in men and 40 in women.

People who have this pattern of consumption can gain a great benefit to their health if they manage to reduce their consumption but not to do so; they have many possibilities of developing a dependence on the drink and present alcoholism.

Alcoholism does not refer to those people who have already developed a severe dependence on alcohol and cannot return to moderate consumption nor have the ability to reduce or eliminate their alcohol intake.

To reach this situation of alcoholism requires several years of continued alcohol consumption, presenting the patterns of intake previously discussed.

This syndrome is characterized by the presentation of a series of physiological, behavioral and cognitive manifestations in which alcohol consumption acquires the highest priority for the individual.

In these cases, the person presents a series of symptoms when he does not consume alcohol and presents a sensation of desire and constant need to drink alcohol.

The development of this syndrome is usually much slower than that presented with other drugs, so it appears on average after 30-40 years of consumption. However, changes in consumption patterns and previous or simultaneous consumption of other substances may motivate a more rapid dependence development.

As we have seen before, alcoholism is a dependency and a physical addiction to alcohol.

This situation that can reach a person appears after many years in which there is an inappropriate and excessive consumption of alcohol.

Likewise, in order to define the presence of chronic alcoholism, the following symptoms must be presented on an ongoing basis.

The person must experience a desire interpreted as a need to consume alcohol.

Usually these sensations automatically lead to consumption, at which time the need to ingest alcohol is decreasing.

However, in those times when alcohol is not consumed, the desire to ingest alcoholic beverages increases progressively.

In general, a person with an inadequate drinking pattern has certain difficulties in controlling alcohol intake.

However, in chronic alcoholism there is a lack of absolute control in the consumption of alcoholic substances, referring both to the need to start drinking and the inability to suspend or reduce this consumption.

It is one of the main symptoms to determine the presence of chronic alcoholism.

In these cases, the person presents a series of annoying physical sensations, as well as behavioral and / or emotional changes in moments that do not consume and that their desire to ingest alcohol cannot be fulfilled.

This symptom is not exclusive of chronic alcoholism, since a person who does not present a clear dependence on alcohol but who consumes this substance on a regular basis can also present it.

However, in chronic alcoholism appears a high tolerance to the substance, in such a way that the person needs to consume greater amounts of alcohol to achieve the same effects as previously obtained with lower doses.

It is quite common for chronic alcoholism to appear in the memory and in the cognitive functioning of the person.

There may be lapses, sudden forgetfulness or gaps in memory, especially in times of increased consumption.

In order to be able to talk about chronic alcoholism, consumption has to interfere with the normal functioning of the person.

In this way, excessive consumption of alcohol can affect different areas such as social, work, academic or family.

Chronic alcoholism is one of the conditions that constitute greater risks for the person.

Thus, suffering from high alcohol consumption and a dependence on these substances for a long time, can lead to serious health problems as well as mental disorders and social problems.

As regards the physical component of the person, chronic alcoholism is a risk factor for many diseases and disorders of the body.

Probably the organ that is most affected by chronic alcohol consumption is the liver, since it is responsible for metabolizing this substance in the body.

Thus, chronic alcoholism can affect the liver in many ways, causing alterations such as alcoholic liver disease, whose damage can range from a liver inflammation to the development of diseases much more serious as cirrhosis.

Alcohol consumption is one of the main enemies of hypertension, so chronic alcoholism is the main risk factor for the development of this disease.

Alcohol is a highly irritable substance for the digestive system; it attacks the digestive mucosa and can cause a disorder such as heartburn, vomiting or ulcers with bleeding.

In this way, people with chronic alcoholism often have many digestive problems and alterations in their functioning.

Alcohol abuse decreases the absorption of many vitamins and minerals, so chronic alcoholism often leads to an accelerated deterioration of the body.

As we see, chronic alcohol usually carries with it a large number of physiological alterations, however, its greater damage occur in the brain and the cognitive functioning of the person.

Unlike other diseases that may be more or less predictable, chronic alcoholism is always translated into a decrease in the intellectual capacities of the person.

Alterations at the intellectual level that can produce chronic alcohol consumption are usually variable; however, cases of chronic alcoholism are rarely seen without alterations in cognitive functioning.

The cognitive impairment can range from decreased memory capacity or have memory problems, to develop a clinical picture of dementia franc.

Alcoholism entails a series of circumstances that cause a reduction of the social circle and a progressive isolation of the person.

Many studies have shown the strong correlation between alcoholism and depression.

People with chronic alcoholism usually become depressed and are overwhelmed by symptoms such as feelings of sadness, apathy, and decreased energy.

Finally, alcohol causes irreparable damage to the human nervous system, so people with chronic alcoholism often present with symptoms such as tremors, lack of coordination and parkinsonian manifestations.

The treatment of chronic alcoholism is a simple task and requires a lot of effort on the part of the affected person to be overcome.

However, certain studies such as the one carried out by Antonio Gaul of Hospital Clinic in Barcelona have shown that, unlike the popular belief that alcoholics relapse into consumption relentlessly, if proper treatment is applied, chronic alcoholism can be overcome.

The therapeutic strategies that have proven effective for the treatment of chronic alcoholism have been psychotherapy and pharmacotherapy.

As regards drugs, the use of benzodiazepines, clomethiazole and tetrabamate during the detoxification phase, and disulfiram and calcium cyan amide during the maintenance and discontinuation phase is recommended.

However, to achieve long-term effects, this treatment must be accompanied by psychotherapy, which is based on providing the individual with strategies to reduce withdrawal discomfort, avoid consumption behaviors and increase motivation for change.