The synthetic drugs refer to a very broad set psycho stimulant which is manufactured by chemical processes.

Thus, unlike other types of psychoactive substances, these drugs are not obtained from a natural product, but are synthesized from molecular changes made in laboratories.

In this article we will review the 8 most common synthetic drugs that exist today, and we will comment on what their characteristics are and what consequences they can cause. 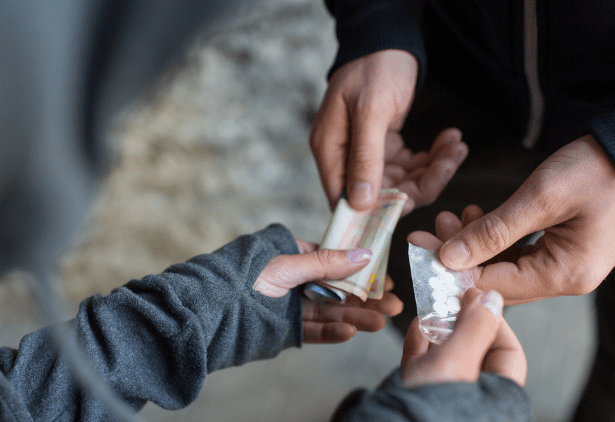 Most of them are derived from amphetamines, are usually taken orally and are presented in tablets with striking colors, shapes and designs.

Synthetic drugs are popularly considered as new substances and of recent emergence, however in the synthesis of drugs began to be realized towards the decade of the 60.

The production of synthetic drugs began with the synthesis of MDMA (3, 4, -methylenedioxymethamphetamine).

This substance was discovered in 1912 and patented in 1914, and in the 60’s began to be used as a substance abuse in the United States.

The emergence of synthetic drugs opens a world in which substances of abuse can acquire endless features and cause multiple psychoactive effects, since in the laboratory can be modulated any details of the drug that is synthesized.

However, the general aspects of all synthetic drugs are quite similar to each other, and the different substances that are acquired in laboratories share many characteristics.

Generally, synthetic drugs are substances derived from amphetamines, which are manufactured by chemical methods and obtained through drug precursors.

Thus, synthetic drugs are not usually characterized as totally novel substances with characteristics very different from those of other psychoactive substances or with “on-demand compositions”.

However it should be noted that they could be, that is, a synthetic drug could acquire any design that would be wanted to contribute to the psychotropic drug.

The fact that this does not happen is that synthetic drugs emerged with the aim of satisfying new demands and replacing controlled psychotropic drugs, so that the demands of consumers motivate the characteristics of these drugs do not differ much from traditional drugs.

All the synthetic drugs perform a mixed pharmacological action, so they combine stimulating effects with sensory alterations.

Thus, as with hallucinogenic drugs, these substances can produce great variability of effects, and often act in the brain in a rather unpredictable way.

Usually, as with most psychoactive substances, the effects of the drug appear within 30 minutes of ingestion and may last for 3 to 4 hours.

The most common effects of these substances are usually behavioral and emotional changes, such as experiencing euphoria, elevated self-esteem and high disinhibition.

However, due to the diversity of effects that can originate, it can also have opposite consequences, with experimentation of confusion, anxiety, aggressiveness, depression or even suicidal ideations.

On the other hand, some synthetic drugs usually cause hallucinogenic effects and perceptive distortions, although with generally low intensities.

Currently, knowing how many synthetic drugs exist is a virtually impossible task, however, according to the Technical Department of the General Council of Official Colleges of Pharmacists of Spain, specifies 8 types of synthetic drugs that predominate both by their consumption and by their manufacture.

Ecstasy is the common name by which MDMA is known. Another type of nomenclatures that this psychoactive substance receives is Adam, XTC, X, E, pills or perusal.

These substances are the synthetic drug par excellence, the most manufactured and the most consumed.

It usually comes in the form of a small tablet, although in some cases can also be consumed as a powder, which can take different colors.

It is estimated that the prevalence of consumption of this type of substances could reach 1% in Spain, and exceed in countries like Ireland or the United States.

The minimum dose to be active is usually about 100 milligrams, and begins to cause its effects after the half hour after consumption.

The effects of ecstasy can be multiple and usually unpredictable.

As regards the physical component, they usually increase energy, sensitivity, can produce tachycardias, arrhythmias and hypertension, can decrease appetite, cause dry mouth, increased sweating and overstimulation.

Consumption of ecstasy in high doses usually causes nausea, vomiting, tremors, motor hyperactivity, chills and dehydration. It can also cause direct heart problems, kidney failure or even death from poisoning.

Regarding the psychological effects, it produces feelings of euphoria, pleasure and sensation of omnipotence due to its stimulating effect, as well as sensoperceptive alterations and occasional hallucinations.

However, at high doses can induce anxiety, panic, confusion, irritability and even psychotic pictures.

Finally, it is extremely dangerous to combine the consumption of ecstasy with alcohol, as it can trigger a heat stroke, with a high risk of dehydration.

By its composition, the ecstasy does not generate physical dependence; nevertheless a high addiction can be initiated and psychological dependence if it is consumed of frequent form.

In addition, this synthetic substance, through cerebral overstimulation, usually causes a high cognitive deterioration that manifests itself through intellectual problems over the years.

The Eva or MDEA is a drug with a chemical structure that is closely related to that of ecstasy.

In fact, there are several compositions with similar characteristics to those of MDMA; however, of all of them the most popular is this drug that usually carries the word Eva recorded in the tablet.

Its characteristics are practically in line with those of ecstasy, although it is characterized by producing the psycho stimulatory effects with a greater speed (they can appear to the few minutes after the consumption) and to have an active life, that is to say, a duration of the effects shorter.

As with ecstasy, Eva produces a high neurotoxicity on the serotonin system.

Also, it is notable for inducing a decrease in body temperature very high, so it can cause hyperthermia very easily.

It is consumed through tablets with striking forms containing between 100 and 200 milligrams of the substance, causes a high stimulation of the central nervous system, causing sensations of euphoria and exaltation, but causes fewer perceptive alterations.

The consequences of its consumption are just as devastating as those of ecstasy; it produces clear cognitive atrophy and can cause many physical alterations and vascular diseases.

Speed ​​is the hydrochloride of methamphetamine, i.e. it is a derivative of natural amphetamine.

This drug is a white, crystalline, odorless and bitter-tasting powder that is usually dissolved in aqueous substances, and which can be consumed ingested, inhaled, injected or smoked.

The initial effect of the drug is known as flash, which lasts for a few minutes and is described as a sensation of extreme pleasure.

The mechanism of action is very similar to the other two drugs discussed and to the action of methamphetamine, which is characterized by intense stimulation of the central nervous system.

Chronic abuse of this substance may induce psychotic behavior with intense paranoia, visual and auditory hallucinations, and uncontrollable emotions of anger or anger.

Angel dust is the popular name given to phencyclidine or PCP.

It is a hallucinogenic drug that was initially used as anesthetics due to its sedative effects.

However, the consumption of this substance also causes states of extreme agitation, perceptual alterations, experimentation of hallucinations and psychotic thoughts.

It is marketed in the form of tablets, capsules and colored powders, and can be consumed both inhaled and smoked or ingested.

Their effects provoke a total inhibition of the ability to concentrate, to think logically and to articulate behaviors.

It also causes feelings of euphoria and sudden mood swings, and can experience recurrent fear, anxiety or panic after the euphoric sensations.

The consequences of the consumption of this substance usually translate into a clear loss of memory and general cognitive failure, being affected so much the speech, as the thought and the reasoning.

Likewise, their habitual consumption can induce depressive states with relative ease, cause emotional alterations and provoke a notorious loss of weight.

The Poopers are substances that are composed of amyl nitrate or nitrite butyl or isobulito.

It is a liquid, colorless and odorless drug that is consumed through inhalation and marketed through glass jars.

It should be noted that amyl nitrate is a very volatile substance, so it cannot be ingested as it can cause an immediate death.

As for their consumption through inhalation, the Poopers cause a very high stimulation and vasodilatation in the brain.

This makes the effects of the drug practically immediate, and within a few seconds of its consumption is experienced a high sense of euphoria, disinhibition and pleasure.

After a few minutes of the consumption, the effects of the drug disappear completely, being able to experience opposite sensations like decay, depression or exhaustion.

Likewise, this substance causes a series of important physical alterations like elevated redness of the face, headache, nausea, vomiting, tachycardia and orthostatic hypotension.

Likewise, Poppers are considered dangerous substances because of the high addiction they can induce and the physical dependence they originate.

It is known as liquid ecstasy but has nothing to do with MDMA.

This substance is a physiological metabolite derived from the neurotransmitter GABA, which is found in the brain of all people.

It is a liquid without color and without smell, and with salty flavor that causes relaxation and drowsiness.

In general, this drug causes a greater global inhibition of the brain, to the point of being able to trigger a hypnotic state, slow the heart rate and breathing.

Also, the consumption of high doses can induce coma or even death with some ease, and habitual consumption usually causes depressive states, cardiopulmonary problems and risk of myoclonus and epileptogenic activity.

The plant ecstasy are prepared a highly variable composition consist of many plants and chemical compounds.

This drug is characterized by stimulating the nervous cortex through components of caffeine and amphetamine @nalogues and its consumption can cause multiple adverse reactions.

In fact, the American Food and Drug Administration showed that consumption of this drug can lead to problems such as hypertension, palpitations, tachycardia, stroke, seizures and insomnia, and can be fatal in 10% of cases.

The Examine is a derivative of PCP that has high anesthetic and @nalgesic effects, and can consume as much as injected or snorted ingested.

Its effects are very variable but usually because a clear difficulty to think and speak can cause blurred vision, delusions, pseudoalucinations or temporal-spatial disorientation.

It can also have important health consequences such as respiratory depression, cardiac arrest, anxiety disorders and psychotic conditions.