The consequences of child abuse in the child can be incredibly negative for their well-being and subsequent development. We live in a world full of violence from which children cannot escape either. Did you know that child abuse is increasing considerably?

Therefore, it is necessary to report this problem in all areas, especially in education, in order to prevent and identify it.

What types of child abuse exist?

Before starting to develop the negative effects that different types of abuse have on children who suffer it. We have found it useful to explain them briefly for a better understanding of the article:

Physical abuse is understood as all that action of conscious form on the part of the parent or person who takes care of the child who is capable of causing damage to him at a physical level or puts him at risk of suffering it (Robaina, 2001).

This would result in finding in the child’s body traces of the object with which he has been attacked, such as clothes iron, belt, shoe … On the other hand, the child would also present inflammations of some parts of the body, fractures as well as frequent hospital admissions for injuries whose cause is not very clear.

Emotional abuse is understood as all those actions carried out by the parents or caregivers of the minor in order to ridicule, insult, scold or belittle them. Children who receive this type of abuse do not usually play and are detected because they always look sad and silent (Bullejos, 2008).

It is considered as the lack of frequent attention to the physical needs of the child by the people who care for him. This means that these children have poor hygiene, sometimes they are malnourished or even go with clothes that are inadequate for the climate or place, among others.

Are all those actions that can be performed by the adult of a sexual nature towards the child. These minors in addition to presenting problems in the genitals usually have problems walking as well as many infections.

Psychological abuse is understood “as any action that produces mental or emotional damage in the child causing disturbances of sufficient magnitude to affect dignity, alter their welfare or even harm their health” (Bullejos, 2008).

What are its consequences for the child?

Below we explain the consequences that the different types of abuse can have on the minor. However, although we address it in a general way these symptoms can occur in any child and have a greater or lesser presence depending on the abuse that is suffering as well as their personality and temperament.

1- Aggressive and / or destructive attitudes

A response that is usually given to physical abuse is an aggressive attitude towards the world around him, let’s say it is a defense mechanism that makes him feel better in some way because of what happens to him.

The previous aggressive attitudes will lead the child to disobey the rules imposed on him with the intention once again of wanting to flee and / or face his harsh reality.

Another consequence may be undoubted hyperactivity. The child who is the victim of physical abuse can be nervous and tense, since he will be waiting for his father to beat him from one moment to the next without any cause.

This can lead to a shy attitude. An example can be children who do not speak or relate in class because they are afraid of making mistakes or doing something wrong.

The child to be all the time in tension will develop fear and anxiety which will lead him to want to be always alone and not want to interact with anyone, much less participate in class.

When not understanding why it happens, children who suffer some type of abuse are often blamed and even believe that they really deserve this type of punishment, which on the other hand leads them to present a low self-esteem that will affect their lives in a decisive way ( Santana et al., 1998).

By not wanting to participate in activities, spend time alone and even be most of the time in tension by the fear and anxiety that presents, these children as a rule will have a low academic performance.

The vast majority of children who suffer sexual abuse are those who tend to be more suspicious of adults although we can generalize this consequence to all others.

Not understanding or knowing why they are being mistreated can lead them to feel angry and feelings of injustice before their situation.

Suffering these types of abuse can trigger problems in psych0m0tor development. That is, capacities that children must acquire at certain ages that are not appearing. For example: the development of speech.

More well-known as the contempt towards oneself. Normally this type of feeling can be seen in sexual abuse because most of them can be very traumatic.

On the other hand, they may have an0rgasmia that results in a malfunctioning 0rgasm during sexual intercourse.

14- Loss or reduction of libido

Also, minors who have suffered this type of abuse can present little or no desire for sexual type in their adult stage due to psychological traumas. 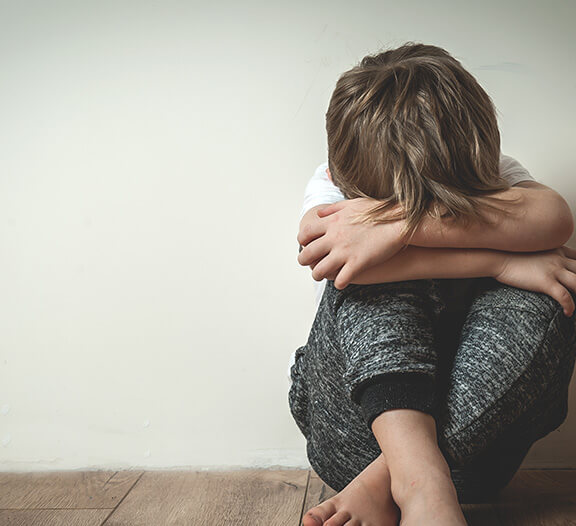 Children can suffer apathy due to the suffering they suffer from living some kind of abuse or mistreatment by their parents or a close family member.

They will be apathetic in all aspects of their lives. That is, they will not show interest or motivation for anything or anyone.

As stated above, you will prefer to be alone in dealing with your peers or with anyone around you.

17- Problems relating to each other

This will lead him in his adult stage or in adolescence to have problems to relate to others since he will not have had the opportunity to develop his social skills adequately or on the contrary, his level of distrust towards people will not let him do it.

Children who have suffered emotional abuse tend to be more expressionless than others because of the suffering they have felt. They tend to be shy and quiet and absent in most cases (Santana and others, 1998).

In some cases, they usually present emotional blockage due to the traumatic chock they suffer. They can not express what they feel or identify their feelings.

Children who are emotionally mistreated tend to have a feeling of rejection because their parents do not pay attention to them, which will lead them to feel a great void of love and affection that they will try to supply with other activities.

Children who suffer abuse through neglect often miss school a lot, thus hindering their learning and their future.

22- Indifference of the external environment

Because they are often seen as a burden, children even fail to identify the external environment in which they live as they barely leave their home.

Children who are emotionally abused even feel that they are not loved by their parents given the styles of parenting, education, and care they receive.

Different studies have revealed that there is a clear relationship between suffering violence in childhood and suffering or developing personality problems in adults (Forero, 2010).

25- Problems with substance use

Adults with problems of intake of prohibited substances or alcohol often report stories of abuse or neglect during childhood (Shin et al., 2010).

The rebellious behaviors and feelings of apathy can make during adolescence or adulthood the child present criminal conduct.

On the other hand and although it is strange, also due to what they have suffered due to the constant abuses, minors can become aggressors (Frías and Gaxiola, 2005)

Some studies suggest that there is a relationship between the violence experienced in childhood and the subsequent depression in adulthood (Frías and Gaxiola, 2005).

By way of summary, we can say that suffer the abuse suffered by their parents, this will affect drastically. Translating into school problems as well as cognitive and social problems (Barnett et al., 1996).

They will also suffer behavioral problems due to a childhood plagued by aggression and even withdrawal. On the other hand, all these consequences can cause the child to abuse toxic substances or end up having behaviors prohibited by society (Luntz and Spatz, 1994).

What profile do the different aggressors have?

On the other hand, they do not want the child to have friends or to relate to anyone of their opposite sex and even get to sexually arouse it with magazines, movies or own exhibitions.

He also constantly devalues the child both in public and in private and blames him for all the bad things that happen to them in their day to day life. He does not usually show affection for the child threatening and terrorizing him frequently.

Since he is not well, he will reject the child and will be little tolerant of it. This will lead you to not pay attention or to spend time, so the child will always be alone.

As we have seen in this article, child maltreatment can seriously affect the physical and mental development of children, not only in the stage in which they suffer but also in the adult.

Therefore, knowing how to identify the profile of the abuser and the warning signs in schools or from their immediate surroundings is an increasingly necessary action to prevent and alleviate the symptoms or consequences that we have explained in this article.