The frontal lobe is possibly the brain area that most distinguishes humans from the rest of the animals. For this reason, it has aroused special interest in the researchers, who have carried out multiple studies on their functions and operating mechanism.

The human frontal lobe is widely related to functions as important as language, control of motor actions and executive functions, so that, if injured, the person can suffer serious problems that we will also discuss in this article.

Neuroanatomy of the frontal lobe

Before explaining the functions of the frontal lobe, its location and anatomy will be described.

The cerebral cortex is divided into lobes, separated by grooves, the most recognized being the frontal, parietal, temporal and occipital, although some authors postulate that there is also the limbic lobe (Redolar, 2014).

The cortex is divided into two hemispheres, the right and the left, so that the lobes are present symmetrically in both hemispheres, with a right frontal lobe and a left lobe, a right and left parietal lobe, and so on..

The cerebral hemispheres are divided by the interhemispheric fissure while the lobes are separated by different grooves.

The frontal lobe reaches from the most anterior part of the brain to the fissure of Rolando (or central fissure) where the parietal lobe begins and, on the sides, to the Sylvian fissure (or lateral fissure) that separates it from the temporal lobe.

Regarding the anatomy of the human frontal lobe, it can be said that it is very voluminous and has a pyramid shape. It can be divided into precentral and prefrontal cortex:

The frontal lobe, and especially the prefrontal cortex, is the cortical area most widely connected to the rest of the brain. The main connections are the following:

The prefrontal cortex is the last area to develop in the frontal lobe and brain in general. This area is especially important because it fulfills functions without which we would not be effective in our day-to-day activities, such as planning and organizing future behaviors.

It has a pyramid shape, like the frontal lobe, and has an internal face, an external and an internal.

Regarding the connections it establishes with the rest of the structures, there are three main circuits:

The functions of structuring, organizing and planning behavior are attributed to this area. The patient suffers the following failures if this area is injured:

The frontal lobe fulfills multiple functions that can be summarized in:

Next, the executive functions will be described in greater depth because of their great importance in humans.

Executive functions could be defined as the last step in the control, regulation and direction of human behavior. This concept arises for the first time from the hand of AR Luria in 1966 in his book Higher Cortical Function in Man (cited in León-Carrión & Barroso, 1997).

Lezak popularized this term in American psychology. This author highlights the difference between executive and cognitive functions, stating that, although cognitive functions suffer damage if the executive functions function correctly, the person will continue to be independent, constructively self-sufficient and productive (cited in León-Carrión & Barroso, 1997).

The executive functions are made up of four components:

1- Formulation of goals . It is the process by which needs are determined, what is wanted and what is capable of achieving what is wanted. If a person has this function altered, he can not think about what he should do and presents difficulties in starting activities.

These alterations can occur without the need of brain damage, simply with a poor organization in the prefrontal lobe.

2- Planning It is responsible for determining and organizing the necessary steps to carry out an intention.

This process requires certain capacities such as: conceptualizing changes in present circumstances, developing oneself in the environment, seeing the environment objectively, capable of conceiving alternatives, carrying out elections and developing a structure to carry out the plan.

3- Implementation of plans. It is interpreted as the action of initiating, maintaining, changing and for sequences of complex behaviors in an integral and orderly manner.

4- Effective execution. It is the assessment based on the objectives and resources used to achieve those objectives.

The teaching system is very important for the correct configuration of executive functions, since these functions begin to develop in childhood, from the first year of life, and do not mature until puberty or even later. 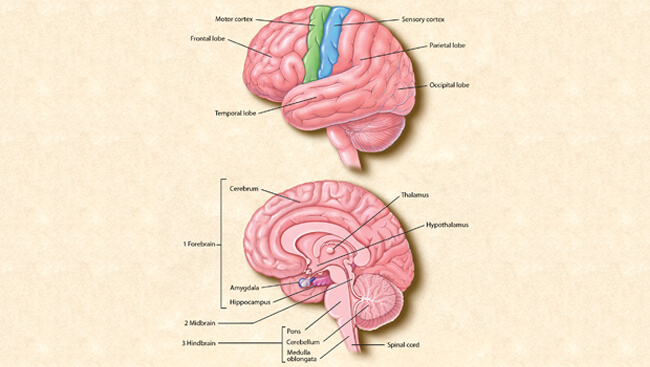 The most used techniques for the evaluation of the executive system are:

Dysfunctions of the frontal lobe

The frontal lobe can be damaged as a result of trauma, heart attacks, tumors, infections or the development of some disorders such as neurodegenerative or developmental disorders.

The consequences of frontal lobe damage will depend on the damaged area and the extent of the injury. The syndrome, due to damage to the frontal lobe, better known is the prefrontal syndrome that will be described below.

The first well-documented description of a case of this syndrome was made by Harlow (1868) about the case of Phineas Gage, over time this case has continued to be studied and today is one of the best known in the field of psychology (cited in León-Carrión & Barroso, 1997).

Phineas was working on the tracks of a train when he had an accident while compacting gunpowder with an iron bar.

It seems that a spark came to the gunpowder and it exploded by throwing the iron bar directly at his head. Phineas suffered a lesion in the left frontal lobe (specifically in the medial orbital region) but he was still alive, although he still had sequels.

The most significant changes due to the injury suffered were increased impulses, inability to control and difficulties to plan and organize.

According to Ardila (cited in León-Carrión & Barroso, 1997) there are two ways to describe the changes in personality caused by this syndrome:

Among the changes in motor skills we can find:

The main changes are in the orientation response, patients have deficits to orient themselves to the stimuli they should at home and when following the instructions of the examiner.

The most characteristic is:

The frontal lobes play an important role in memory, especially in short-term memory. Patients with lesions in the frontal lobe present problems in storage and memory retention. The most frequent alterations are:

The executive functions are the most affected in patients with frontal lesions, given that a complex elaboration and the integration and coordination of several components are necessary for its correct performance.

People with a frontal syndrome are unable to form a goal, plan, carry out actions in an orderly manner and @nalyze the results obtained. These deficits prevent them from leading a normal life as they interfere with their work/school, family, social tasks …

Although the symptoms described are the most common, their characteristics are not universal and will depend on both patient variables (age, premorbid performance …), and injury (specific location, a magnitude …) and the course of the syndrome.

The category of frontal syndromes is very broad and encompasses another series of syndromes that differ according to the injured area.