The DMT or N, N-Dimetiltriptamina is a psychedelic drug and entheogenic. Many people consider this narcotic drug as the most powerful drug that exists and its main effects lie in the alteration of consciousness, stimulation of the central nervous system and perceptual distortion.

DMT is used as a drug of abuse in different regions of the planet, its high potential has been demonstrated and it is pointed out that its consumption can generate important alterations in the cerebral functioning. 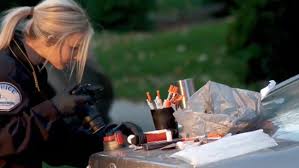 In this article we will review the characteristics of DMT, clarify its mechanism of action, the effects it produces on the brain and the experiences that can lead to its consumption

N, N-Dimethyltryptamine, which we will now name as DMT, is an entheogen, ie a plant substance with psychotropic properties that when ingested causes a modified state of consciousness.

This substance is found naturally in multiple plants and animals, and belongs pharmacologically to the family of tryptamine .

In spite of making a natural substance, during the last years it has been massively used as a drug of abuse and recreation, mainly due to the effects on the conscience and the experimentation of hallucinations that it produces.

Thus, DMT as psychedelic, ie as a drug, can be found in both natural extracts and synthesized forms.

In its recreational use, DMT adopts different nomenclatures like tripi executive, dimitri, false ecstasy or robocall, among other forms of slang.

Naturally, this substance appears as a white crystalline solid, however, when it is made in a synthetic way , it takes on an impure form and usually appears in yellow, orange or salmon.

This fact is relevant since the DMT synthesized (to be used as a drug of abuse) can present a different formulation and produce different effects on the nervous system when consumed.

However, it should also be borne in mind that by synthesizing DMT, the impurities of the substance can be removed and the color and appearance identical to the natural substance can be eliminated, so it is often difficult to differentiate a pure DMT from a synthetic DMT .

The DMT was discovered in 1931 extracting the active principle of ayahuasca . It became very fashionable in British clubs but is currently consumed mainly by the “psychonauts”.

Both natural DMT and synthetic DMT belong to the group of substances known as psychedelic or hallucinogenic .

These types of drugs are grouped into a single classificatory entity because of the intense effects they produce on perception, thinking and emotion.

Its historical use is linked to magical or mystical aspects such as relating to spirits, finding cures for diseases or entering different worlds.

However, today the recreational use of these substances is more widespread and not all people consume it under religious or mystical contexts.

There are multiple psychedelic and hallucinogenic drugs and each contains a number of specific characteristics.

In this way, we can find hallucinogenic fungi such as amanita muscaria or psilcybe, hallucinogenic plants such as atropa belladonna, mescaline or cannabis, and synthetic drugs.

Design drugs are psychoactive stimulants of synthetic origin, created by modifying the chemical structure of certain natural products or drugs.

Thus, these substances are synthesized in laboratories by simple chemical methods with the aim of enhancing or exacerbating the effects of a given substance.

There are multiple types of hallucinogenic synthetic drugs such as synthetic opiates, arylcyclohexylamine, amphetamine derivatives, phenethylamines and tryptamines.

Of all of them, the DMT corresponds to the last subcategory, reason why we can classify this substance like a hallucinogenic substance, synthetic and pertaining to tryptamine substances.

This fact shows that despite the fact that DMT is found naturally, its trade and use as illicit drug is made through the synthesis of the substance, so that its effects may be somewhat unpredictable. .

What effects does the consumption of DMT cause?

DMT can be taken orally, although it is usually smoked, and can be mixed with m@rijuanaor tobacco.

Its effects last between 45 and 60 minutes, which can be divided into different phases: at 20 seconds the first effects appear, during about 15 minutes the “trip” is experienced and residual effects appear in the last 15 minutes.

The first effect usually produced by the DMT drug lies in perceptual distortions.

Thus, consuming relatively low amounts of this substance are often experienced in non-colored visions, and perturbations of the notion of time and space.

With higher amounts you can experience what in slang is known as “Blase”, an intense perceptive alteration that is characterized by the feeling that one stops being itself and happens to be another person.

Other important effects of this drug is based on emotional communication.

The individual who is under the effects of DMT will experience emotional reactions of extremely high intensity.

Finally, the experimentation of strong and highly elaborated hallucinations, non-verbal communications with unreal beings, the feeling of traveling spiritually to other realities or planes, mental expansion or subjective intensity are other very common effects of DMT.

Sensations experienced after consumption of DMT

Accurately describing the effects of this drug is complicated by the severe sensory disturbance it produces.

In fact, it is argued that DMT is the drug with the greatest potential for perceptual distortion and that its consumption invariably produces the experimentation of extremely elaborate hallucinations.

In this way, people do not naturally experience the sensations that DMT produces, so verbalizing their effects through language becomes a difficult task.

This fact is explained by Terrence Mckenna, a writer, speaker, philosopher and psychonaute who consumed DMT more than 30 times and who tried to explain exactly the characteristics of the effects of the drug.

To clarify the effects of DMT, this author made 8 different stages that are experienced after the consumption of the substance.

The senses are sharpened, the colors begin to shine brighter, the edges are more defined, and the distant elements begin to see more clearly.

In this way, the first perceptual alterations, mainly visual ones, begin to be witnessed.

Subsequently, the perceptual alterations increase, when closing the eyes the colors move and join, and form a chromatic figure that rotates slowly.

The author named this image as “the chrysanthemum”, which lasts about 10 minutes.

Then the chrysanthemum is broken. When this visual disturbance occurs, an auditory hallucination may also be experienced, characterized by a sound similar to the burst of a flame.

It consists of the highest effect produced by the drug described above under the name Blase.

McKenna assumes the difficulty of delimiting this sensation with words and, therefore, describing the effects that are experienced.

In general, it is a severe and very elaborate hallucination, in which the person presents himself in a different place, in a parallel reality.

Many consumers of DMT call this place “the dome” and is described as a dimly lit site, where the walls move slowly and they experience geometric and chromatic hallucinations.

This fifth experience that produces the drug serves to define much of the characteristics of its effects.

According to McKenna, the effects of the drug do not affect the idea that you have of yourself.

In this way, after the explosion in a different reality, the individual realizes the change, and wonders why he is not where he was before, where he is now and what is happening to him.

People who are under the effects of DMT witness extravagant and unreal beings.

There is some confusion in defining this hallucination and the characteristics of the elements that are perceived.

There are people who say they are aliens, others who believe they are people from a parallel world, dead people or humans of the future.

However, it is argued that DMT produces visual hallucinations in which one sees, communicates and relates to unreal people (product of hallucination).

It is described as a less typical experience but appears in some individuals consuming DMT.

It is a hallucination that combines unreal body sensations with the appearance of language.

In this way, the person can feel as when speaking, language travels through different regions of the body providing different physical sensations.

Finally, the hallucinations fade and are increasingly less intense.

McKenna relates this sensation as the fading of dreams when you start to wake up.

Mechanism of action of the DMT

DMT is an indole nucleus tryptophan alkaloid. Its oral use among humans is possible thanks to the synergy between an MAOI (inhibited monoamine oxidase) and plants containing tryptamine such as Mimosa hostilis or psychotria viridis.

Thus DMT can be consumed orally if an MAOI is added (if not added it does not perform psychedelic effects) or by the most common, smoked route.

It is usually consumed in doses that vary between 15 and 50 milligrams, although there are experiences of consumption with up to 150 milligrams.

It is hypothesized that the synthesis of this substance could be made in the pineal gland , a small endocrine region of the brain.

In addition, it has been discovered that DMT plays a fundamental role in the nervous system of humans as a regulator of the SIMA-1 receptor. However, the mechanism of specific brain action that develops this drug has not yet been detailed.

The discovery that this substance could act in the pineal gland of the brain not only served to know some of the effects of the drug, but also allowed to know that the substance DMT is produced naturally by the brain .

Thus, not only do we find DMT in plants or plant elements, but humans themselves secrete this substance normally in our body.

Specifically, DMT is produced by the pineal gland, a region located on the roof of the diencephalon that is popularly known as “the third eye.”

The main function of this gland is to produce melatonin when there is no light, a fact that allows to regulate the wake-sleep cycle.

Likewise, the pineal gland affects sensory activities, being considered as one of the main visual pathways that allows to convert the light information captured through the eyes.

On the other hand, it is a region with an important antioxidant power, it participates in the processes of apoptosis of cancerous cells in the thymus, and controls endocrine and growth related aspects.

Finally, the pineal gland produces Dimethyltryptamine, ie DMT, which is responsible for producing the visual effects of sleep, enhance internal awareness and control the notion of time and reality.

This substance is secreted in small quantities in a normal way by the brain, however, when DMT is consumed, the drug is “added” to endogenous Dimethyltryptamine.

This fact would explain much of the effects of the drug since the functions that control this substance would be altered with the entry of the drug and the massive increase of the amount of DMT in the pineal gland.