The dyscalculia refers to problems or difficulties that some people have when learning to count, do simple math calculations, spatial thinking and to define groups of objects.

Its definition could refer to a severe deterioration of the specific learning of mathematics in the absence of individual involvement and with an adequate school performance.

Therefore, it is a learning disorder based on the difficulty of mathematical or numerical competence.

The dyscalculia comes from the Greek terms “dis” (difficulty with) and “culia” (average calculations).

His first definition came from the hand of Kosc (1974) who defined dyscalculia as “the difficulty in mathematical functioning resulting from a disorder of mathematical processing of cerebral origin without commitment to other areas of learning”.

However, although the term was introduced by this author, previously there was already talk of children with specific difficulties in the field of mathematics.

The term was officially recognized in 2001 by the Department of Education and Skills of the United Kingdom .

While it is true that researchers are increasingly interested in difficulties in mathematics or dyscalculia, in the scientific community has only begun to walk in their research.

For example, topics related to dyslexia, reading or writing, have a lot more research than difficulties in mathematics or dyscalculia, although their prevalences are very similar.

Children with dyscalculia have great difficulty in understanding the simplest number concepts, a lack of intuitive understanding of numbers and problems in learning facts and mathematical procedures.

The dyscalculia is manifested in children who have an intelligence within normal or above average and who do not suffer or have suffered any brain injury. 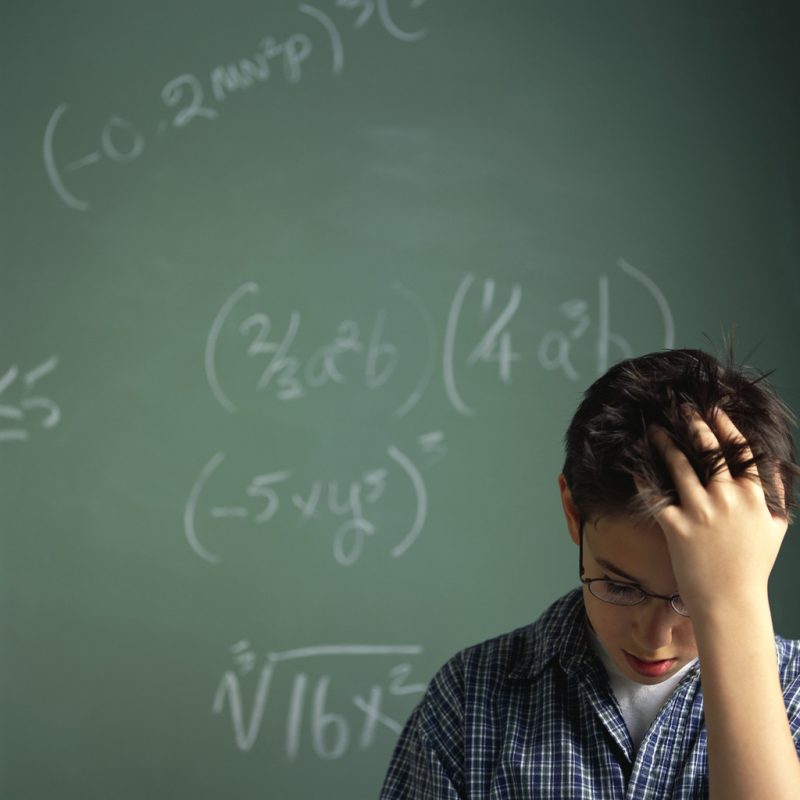 In spite of all this, these children have difficulties when carrying out calculations or mathematical problems, which ends up having a negative impact on the school environment.

It can be detected in basic and preschool schooling, since when the child can not learn to write the numbers correctly, he is already giving us a clue.

Some of the symptoms are, therefore:

– The child does not achieve correct writing in the learning of numbers
– Fails to make classifications with numbers
– Does not make series (something quite common in the first school)
– Can not solve simple mathematical problems
– They have fingers even to solve problems of a single numerical number
– Difficulties with the identification of numbers (write and name)
– Confuses similar numerical graphics
– Confuses the signs of addition, subtraction, division and multiplication
– Invests, rotates and transposes the numbers (for example, the six with the nine).
– Problems in understanding and interpreting problem statements
– Problems to understand concepts that have to do, for example, with size or position.
– Difficulties in order, classification, quantity, correspondence, reversibility …
– Difficulty in spatial and temporal coordination
– Difficulty remembering and understanding formulas, rules, mathematical sequences, multiplication tables …

With regard to dyscalculia, we must emphasize that, given its recent nature in research, there is still an open debate regarding the nature and origin, the criteria or even the terms by which we refer to them.

The dyscalculia is included in the DSM-IV as Calculus Disorder, while in the DSM-5 it changes to be conceptualized within the specific learning disorders.

In this way, the difficulties are all grouped under the same category called Specific Learning Disorder, which includes different specifiers.

Among these specifiers we find the difficulties of reading, of written expression and also the mathematical difficulty.

In this way, the diagnosis of Specific Learning Disorder refers to the difficulties in learning and the use of academic skills, where at least one of the symptoms of those proposed must be evidenced for at least 6 months.

Among these symptoms we find difficulties in reading, comprehension, spelling or written expression.

Some of the symptoms, however, refer to mathematics, which is what concerns us here.

One of these refers to the difficulties in mastering the numerical sense, the calculation or the data referring to numbers.

In this sense, the child would misunderstand the numbers, the relationships that are established between them or the magnitude or for example numbers of a single digit you need to count on your fingers because you do not remember the operation.

It must also be argued that these difficulties must be present despite the interventions that have been directed to solve the difficulties.

The following criteria used to diagnose dyscalculia refer to:

– The academic skills that are affected do it well below what would be expected for the chronological age.

– These difficulties interfere significantly in their academic performance, work or in their daily lives.

– All this is confirmed by an evaluation of the child and standardized tests that corroborate this.

– Difficulties must start at school age (however, they can “show up” later, when the academic demands exceed the person’s aptitudes).

– The difficulties of learning mathematics should not be better explained by intellectual disability or by other types of disorders, whether mental, neurological or sensory.

The diagnosis of dyscalculia should be made by looking at the person’s learning history in different areas, with evaluations and reports.

In addition, the diagnosis runs with a specification, “with mathematical difficulty”, which refers to the meaning of numbers, the correct or fluid calculation, memorization of arithmetic operations or correct mathematical reasoning.

Etiology and epidemiology of dyscalculia

Some authors such as Temple, for example, consider that dyscalculia is present in around 6% of children, either because they only have a diagnosis of dyscalculia or because it is associated with other disorders.

Sometimes even other authors relate it or consider it a “type of dyslexia”, since comorbidity is common between both disorders.

When they refer to a type of dyslexia they make reference to that, saving the differences between reading and writing (of dyslexia) and mathematics (in dyscalculia), the child presents express problems in understanding and performing mathematical calculations.

There is no clear answer today regarding the etiology of dyscalculia.

The causes can be distinguished in:

a) Evolutionary approach : refers to the importance of the stimulation received by the child in the first years.

b) Educational focus : refers to the difficulties that mathematics itself has in the educational field and in the way in which it is taught.

In this way, it is not able to adapt the teaching to the particularities of learning of each student.

c) Neurological approach: this approach refers that some injuries or problems in brain structures could be related to dyscalculia.

Thus, the neurological bases of mathematical functions are found in both hemispheres, so that the arithmetic calculation is a bilateral capacity.

As causes, there are some evidences.

For example, the neuropsychological evidence collected through neuroimaging studies shows that there is a great influence on the parietal lobes before arithmetic abilities, especially in the Intraparietal Groove (SIP), which seems to make reference to the quantity and the processing of magnitude. .

In addition, connections are made to the frontal lobes in terms of solving more complex or new tasks.

Some authors, such as Butterworth, place the causes of dyscalculia in an atypical deterioration or functioning of these areas.

This is known as the hypothesis of the defective numerical module. This has been proven, for example, when it has been observed that there is less activation in children with dyscalculia in these areas when performing arithmetic tasks.

Other authors find the basis of these difficulties in working memory and attention, given that some deficits that occur in dyscalculia are better explained by these processes.

Although in Pre-school Education we can already find numerical difficulties, it is not until around 6-8 years when dyscalculia is formally detected.

Children with dyscalculia do not have to present problems in other cognitive areas. But when it is evaluated, it is done in different capacities such as:

In addition, in addition to the evaluations on the subject itself, the family context is also evaluated with interviews to the family and the scholar through his teacher.

When the child is evaluated, the procedures used to evaluate and diagnose the child are, for example, to anticipate reasonable solutions to a problem or determine what level of arithmetic performance is.

We will have the student solve simple problems, read and write numbers, recognize shapes or interpret spatial representations of objects.

As for the standardized tests, for example for intelligence we can use the Wechsler tests.

In order to evaluate the difficulties in mathematics, there are several tests that evaluate the curricular gap, given that the current gap of competence for the learning difficulties must be of at least 2 school years.

To evaluate it, we found tests such as: PROLEC-R (to evaluate reading processes), TEDI-MATH (for the diagnosis of basic competences in mathematics), TALEC (for reading and writing @nalysis).

If we refer to the intervention in children with dyscalculia, we should note that they can be taught from different levels of difficulty and from different points of view.

For example, some authors such as Kroesbergen and Van Luit consider that there are three levels in the development of mathematical processing throughout schooling.

Thus, the first ones are preparatory skills, with tasks of conservation of quantities, counting or classification.

Then the basic skills, which are represented by the four basic mathematical operations, which are addition, subtraction, multiplication and division.

And the third one refers to the problem solving skills, which is related to correctly applying the previous skills to different situations and contexts.

It is important to emphasize that interventions in dyscalculia must be attractive and adapted to the age and needs of each child, which will increase their motivation and interest in participating in activities.

This can affect the involvement to the task and end up producing a higher performance.

We must also emphasize that when comparing interventions by computerized means in the difficulties in mathematics versus traditional methods, the former are more effective.

The new information and communication technologies (ICTs) are presented as a very beneficial treatment alternative, providing flexibility and adaptation to the rhythm of each child.

In addition, the computer allows to make some abstract concepts more understandable, to provide graphics and animations and to give them immediate feedback on their actions, which improves their adherence and self-regulation.

However, other interventions based on tangible materials that are well designed, that allow direct manipulation of objects or connect mathematics with real life can also offer great benefits.

In the schooling stage of children there are many contents related to numerical skills, very essential for today’s life.

Mathematics is a complex area of ​​knowledge that includes very diverse domains and whose learning is especially difficult in some children.

It is in the last three decades when it has begun to show special interest for these students who have special educational needs for an adequate numerical performance.

It is necessary, more and more, more research in this area and in the mathematical thinking of children and more research development for its treatment.