Endogenous depression is a type of depression that appears without the need for an environmental or circumstantial stimulus that causes an alteration in the person that translates into a depressive condition.

That is, a man or woman who experiences endogenous depression does not need things to go wrong, or have problems or difficulties in their lives. You can present the depressive disorder without any apparent cause.

In this article we will talk about this type of depression, which usually presents with very serious symptoms, but that can be treated effectively with the appropriate interventions.

The endogenous depression refers to what was formerly known as melancholy, a term that refers to a permanent state of deep and intense sadness.

As we have been remarking, it is a disease that is produced by genetic causes that cause metabolic alterations in the brain of the person who suffers it.

Thus, these types of depressions do not involve factors relating to the person’s way of being, the things that he lives, or the management he makes of his life and his emotions.

It can appear without the need for the person to have suffered traumatic experiences or created a way of being depressive.

Therefore, when the disease begins to manifest, the depressed person is unable to adapt, as he did before, his emotional reaction to  different situations in life, and he feels sad and downcast without being able to identify why.

And the basic symptoms of endogenous melancholy are sadness and anguish. However, as we have seen with all depressive syndromes, these two symptoms are not the only ones.

The disorders of affection and humor were already considered by Kraepelin , the reference Psychiatrist of the nineteenth century, as fundamental in endogenous expressions. These are: To. Quality other than habitual sadness

This quality other than humor is not easy to define. In fact, a person with endogenous depression is considered to be empty, anesthetized or indifferent.

Thus, the sadness experienced in this type of depression refers, on the one hand, to a new emotion that has never been experienced, and on the other hand, the inability to express it.

In fact, the person with melancholic depression usually defines this quality other than habitual sadness as an internally uncontrollable, permanent, constant fatigue, without relief, inexplicable and strange.

Therefore, the person with endogenous depression does not interpret their feelings as sadness or grief, but as a state that causes them discomfort and that prevents them from living properly.

As we have said, the sadness experienced in endogenous depressions is not the typical depressive feeling easily identifiable by the patient.

It is a much stranger feeling, that the person who suffers it is not able to interpret and explain clearly.

Thus, the frequent description that endogenous depressive patients perform of their mood is the inability to think, together with the inability to see the future (or not notice the passage of time).

Other important symptoms in this disease are hostility, irritability and anxiety .

These emotions are secondary to the feeling of strange and inexplicable sadness experienced by the patient.

If we put ourselves in context we could imagine the following:

You are a person without mood alterations, you usually feel good or even happy, but one day you start to experience a new emotion that prevents you from enjoying things, experiencing positive feelings and remembering what happiness was.

In addition, you feel this new emotion as something that constantly fatigues you, that you can not control or endure, and that you cannot explain what it is,  why you have it and what you can do to stop having it.

Hopefully, this strange emotion that makes you look bad and have a constant mood of depression, causes you feelings of  anger and anxiety to be like this.

In this way, the irritability, anxiety and even hostility experienced by many people with endogenous depression are justified by the difficulty of living with the new and strange feeling of sadness. 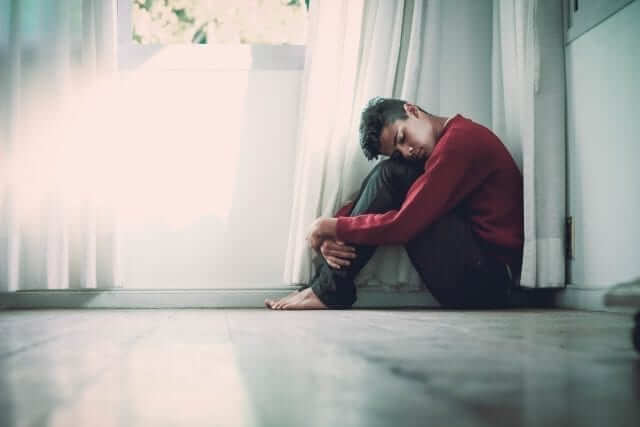 Finally, many authors consider the inability to experience pleasure with any activity as one of the main symptoms of endogenous depressions.

In the same way, they often have their thoughts centered on their discomfort, and they find it very difficult to think and talk about other things.

However, all other cognitive functions are preserved (the person does not become dumb, only slower), and previous mental functioning recovers when the depressed state improves.

The melancholic depression is always accompanied by inhibition or agitation, so these symptoms are main in the disease, since in other types of depression many times there are no alterations in the movement.

The most frequent is that the person is inhibited, difficult to walk and move, take short steps, drag the feet and take a lot in doing actions or answer questions.

People with endogenous depression usually feel fatigued, find themselves worse in the morning, lose their appetite, have dry mouth, suffer  digestive alterations, lose interest in sex and have problems of balance.

Likewise, they often have many problems to fall asleep and wake up earlier than usual.

Finally, unmotivated cries, decreased overall performance, tendency to isolation and, in the most serious cases, suicide attempts are common.

Half of patients with a first depressive episode present a second in the next two years. When you have had the second, the chances of suffering a third increase to 80-90%.

Thus, treatment of this disease is of vital importance because, despite being a severe mental disorder, it can be properly managed if timely treatment is given.

Due to the endogenous origin of the disease, the treatment is usually purely pharmacological, and psychotherapy tends to be more expendable than in  other mental illnesses.

The first choice treatment for this disease is tricyclic antidepressant psychotropic drugs such as imipramine, or serotonin and noradrenaline reuptake inhibitors (NRTIs) such as duolxetine or venlafaxine.

In case of non-referral with these drugs, which must always be under prescription and medical follow-up, treatment with serotonin reuptake inhibitor (SSRI) antidepressants such as fluoxetine or citalompram may be combined.

In severe depressions electroconvulsive therapy (ECT) is particularly useful, which, despite the negative and eccentric impact it has on society at present, has shown a very high efficacy?

In fact, ECT has been shown to be a treatment with 80-90% efficacy intervals in depressions with delusional ideas or serious suicidal intent, which clearly outweighs the efficacy of antidepressants in these cases.

Thus, endogenous depression is a severe and uncontrollable depressive syndrome for the person who suffers it, but fortunately can be treated effectively through psychotropic drugs or electroconvulsive therapy.

Endogenous depression is a depressive syndrome that is characterized by having its origin in the biological or genetic part of the person.

However, it is not the only type of depression, since there are depressive pictures that appear as a reaction to various stressful events that can  happen in a person’s life, and therefore do not have a biological origin like endogenous depression.

The Major depression is a disorder of state organized as an affective mood syndrome, and therefore has particular characteristics.

Normally, a depression refers to a marked change in mood, which is accompanied by nuclear symptoms such as pathological sadness, loss of interest, or inability to experience pleasure.

However, in the depressions other affective, cognitive, somatic and behavioral symptoms appear.

In fact, to dictate that a person’s condition refers to major depressive disorder, the following criteria must be met:

These are the criteria that define major depressive disorder. As noted, mood disturbance and pathological sadness are the essential characteristics.

However, there must also be other types of symptoms: cognitive (difficulty concentrating or thoughts of death), somatic (insomnia or loss of weight and appetite) and behavioral (agitation or slowing motor).

This indicates that depression is not synonymous with sadness and that, therefore, being sad or depressed does not have to mean that you are depressed or that you have a mental pathology.

Also Read: How to Overcome Discouragement and Sadness: 7 Effective Forms

In fact, depressive syndrome is thought to occur when a person does not have enough resources to cope with a particular situation, and is unable to manage their sadness, emotions and activity for a long time.

However, this is not always so, and less so when we talk about endogenous depression.

Endogenous depression arises from within the individual, does not respond to events or situations in the environment. It does not even respond to the personality and the way of facing the person’s life.

Put another way: endogenous depression can appear in a vital and enthusiastic person, who is not suffering a difficult moment in their life (such as a divorce, a job dismissal or the death of a family member), and begin to experience sadness without know why.

Thus, the endogenous depression is a phenomenon very peculiar and very incapacitating for the person who suffers it.