This alteration also receives or has received other denominations in the scientific and medical literature benign tremor , familial tremor or essential tremor (International Essential Tremor Foundation, 2015).

Clinically, it is characterized by the presence of tremor in hands and arms during voluntary movement, although it can also appear in the head or voice (Labiano-Foncubierta and Benito-León, 2013). 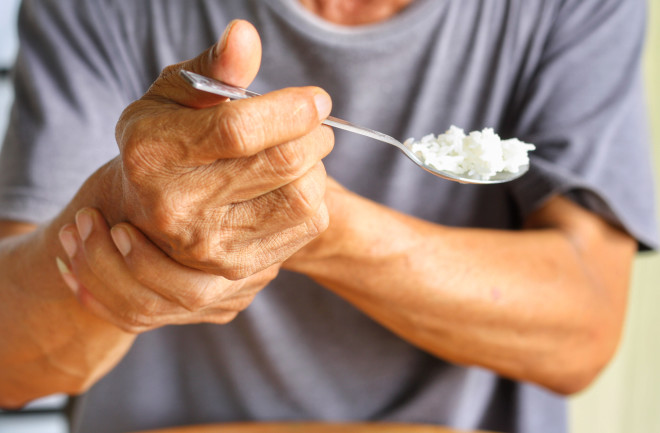 The tremors usually appear when the affected person performs a voluntary action such as eating, drinking or writing (kinetic or action tremor). In addition, it can also occur when different postures are adopted: extend arms or legs to the outside, among others (postural tremor) (International Essential Tremor Foundation, 2015).

The tremors are one of the symptoms commonly referred to in neurology medical services, however, concrete estimates of the prevalence of essential tremor vary considerably among countries (Labiano-Foncubierta and Benito-León, 2013).

In addition, of tremors at the postural level or voluntary movements, in patients with essential tremor may appear other types of alterations: cerebellar motor deficits, cognitive, behavioral and sensory alterations (Labiano-Foncubierta and Benito-León, 2013).

Although there is no definitive cure for essential tremor, it is not a potentially normal neurological condition. Pharmacological prescription is often recommended for symptomatic treatment and physical therapy to reduce tremor and improve muscle control (National Institute of Neurological Disorders and Stroke, 2013).

What is the tremor essence or essential tremor?

Essential tremor is a type of disorder that affects the nervous system and produces rhythmic and involuntary jerking. Although it can affect any part of the body, it is more common in the hands and arms (Mayo Clinic, 2016).

Although this alteration does not put at risk the life of the person who suffers it, the essential tremor is progressive disorder that have to worsen over time (Mayo Clinic, 2016).

In many cases, the essential tremor is underdiagnosed since it tends to be confused with parkinsonian, psychogenic or dystonic tremor (Orphanet, 2011).

Essential tremor is the most common movement disorder. The prevalence of this pathology has been estimated at 2-4% (Orphanet, 2011).

The International Essential Tremor Foundation (2012) has pointed out that the essential tremor affects approximately 10 million people in the United States.

Specifically, it is considered that more than 80% of cases of essential tremor have a genetic and hereditary origin (Orphanet, 2011).

Essential tremor is present in approximately 4% of people aged 40 or older, and possibly in 20% of elderly people older than 95 years of age (Louis, 2010).

This movement disorder can appear and develop at any age, however, it is more frequent in people over 40 years of age (Mayo Clinic, 2016).

The tremors are involuntary and rhythmic muscular movements that appear with swinging or oscillations of different parts of the body. Tremors are the most common involuntary movements and can affect the arms, hands, face, vocal cords, trunk and legs (National Institute of Neurological Disorders and Stroke, 2012).

In the case of essential tremors, these refer to the occurrence of a rhythmic and involuntary movement of the hands and arms, especially and that usually manifests when it comes to performing an action or when a specific position or position is adopted ( Orphanet, 2011).

Therefore, the most distinctive features of the essential tremor are (Labiano-Foncubierta and Benito-León, 2013):

– Kinetic tremor : involuntary, rhythmic and uncontrolled movement that occurs when the person tries to make a voluntary movement such as writing or eating.

– Postural tremor : involuntary, rhythmic and uncontrolled movement that occurs when the person tries to adopt a specific posture.

Although the tremor usually affects both hands and feet, it is possible that one side is more affected than the other. In addition, in some cases the head and legs may also be affected (National Organization for Rare Disorders, 2015).

In general, tremors are characterized by (Mayo Clinic, 2016):

– Insidious on one side of the body.

– Get worse with movement.

– They can get worse with emotional stress, fatigue, caffeine or extreme temperatures.

Approximately in 90% of the cases of patients with essential tremor present an initial clinical course characterized by tremor in the upper limbs, affecting in 41%, in 18% voice, 14% lower limbs, 7% the mandible and less frequently to the trunk and tongue (Bermejo Velasco, 2007).

On the other hand, some people describe the presence of “internal tremors”, a feeling of general body tremor. In more severe cases, the tremor of rest also appears, when the body is relaxed (National Organization for Rare Disorders, 2015).

The tremors are progressive, have got worse over time, the rate of progression has been established at 1.5-5% each year (National Organization for Rare Disorders, 2015), leading to a significant disability in carrying out activities of Daily life, eating, writing, grooming person, driving, etc. (Louis, 2010).

In addition to involuntary movements, patients can present a wide variety of alterations that include (Labiano-Foncubierta and Benito-León, 2013):

– Disdiadococinsia : difficulty or impatience to perform alternating movements in an accelerated manner.

All this symptomatology is associated with a wide variety of social and psychological consequences. In addition, deficits and difficulties in carrying out routine activities can affect the overall quality of life . It is common for affected people to avoid social or stressful situations (National Organization for Rare Disorders, 2015).

Although it has been demonstrated that the occurrence of essential tremor is associated with an abnormal functioning of the cerebellum, at present, it has not been possible to confirm the occurrence of specific anomalies in this structure (International Essential Tremor Foundation, 2015).

In addition, more than half of the cases have been associated with the presence of a genetic mutation, when this happens, the essential tremor is called familial or hereditary tremor (Mayo Clinic, 2016).

It seems that the ensinal tremor is an autosomal dominant disorder, so each child of an affected person has a 50% chance of inheriting it (International Essential Tremor Foundation, 2015).

Despite this, not all people who inherit genes related to essential tremor end up developing this alteration. This suggests a possible contribution of environmental factors (International Essential Tremor Foundation, 2015).

Some risk factors associated with the condition and development of essential tremor have been identified:

– Genetic alterations : there is a genetic component associated with essential tremor, although no anomalies have been reported in specific genes (Mayo Clinic, 2016).

– Age : the condition of essential tremor is more common in people who are over 40 years of age (Mayo Clinic, 2016).

Within the wide range of neurological symptoms, the development of tremors is usually associated with the disease of Parkinson’s disease , however, it is two different clinical conditions (Mayo Clinic, 2016):

– Moment of occurrence of tremors : in the essence tremor, involuntary movements usually occur when a voluntary movement is made, while in Parkinson’s disease the tremor is associated with the resting states.

– Associated conditions : in general, essential tremor does not usually cause severe symptoms in other areas. In Parkinson’s disease it is associated with a serious motor deficit.

The procedure followed for the diagnosis of essential tremor is eminently clinical (Labiano-Foncubierta and Benito-León, 2013):

When a patient goes to a medical service with tremors, it is essential that a detailed physical examination and a complete anamnesis be performed (Labiano-Foncubierta and Benito-León, 2013):

In addition, other specific diagnostic tests can be used to rule out other primary pathologies.

Although there are no unified criteria for the diagnosis, the Tremor Investigation Group has indicated the following points (Bermejo Velasco, 2007):

– Definitive essential tremor : it is a bilateral postural tremor, observable and recurrent in the upper limbs, without presenting neurological , physiological, psychiatric or pharmacological treatments that can explain it.

– Probable essential tremor : besides including the characteristics of the definitive essential tremor, it can affect other corporal areas and be related to the execution of finished activities. It can be transitory.

– Possible essential tremor : it is a postural tremor that is not related to significant neurological conditions.

When tremors are mild or do not cause functional discomfort, many patients choose not to take any therapeutic intervention. On the other hand, in other patients, tremors are an important source of functional disability (Jhons Hopkins Medicine, 2016).

In addition, relaxation techniques or biofeedback can be useful for the management of situations of stress and anxiety that, classically, tend to worsen the symptoms of essential tremor.

In addition, reducing the consumption of some substances that increase tremors (coffee, alcohol, etc.), is essential.

The drugs used in the treatment of essential tremor are usually adrenergic blockers or anticonvulsant medications: