The Genophobia is a type of specific phobia in which the element is feared sexual practice.

At first glance, it seems unlikely that an activity such as sexual practice can provide sensations of fear and states of high anxiety.

However, it is quite certain that you have experienced nervousness or restlessness during the moments before or even during sexual practice.

Well, these nerves or fears that we can experience all people, can accentuate in some cases and originate what is known as genophobia.

Thus, a person who suffers from this type of alteration fears excessive sex, which prevents him from having sex.

In this article we will talk about this disorder, we will comment on its characteristics, its causes and its treatments, and we will approach genophobia in order to better understand this type of phobia so peculiar

Genophobia, as we have said, is a specific type of phobia in which the phobic element is sex.

Thus, we can understand this alteration as an atrocious and disproportionate fear of sexual practices.

The person suffering from genophobia fears, above all, sexual relations. Therefore, not only will you be unable to enjoy them, but you will avoid them whenever you can.

Keep in mind that genophobia, unlike what it may seem, is not a sexual disorder in which the person rejects sex due to inability to enjoy it or lack of interest.

Genophobia is an anxiety disorder, more specifically it is a specific type of phobia.

So, we can interpret this alteration in the same way that we do with spider phobia or claustrophobia.

While in the phobia of spiders the person experiences an intense and disproportionate fear when one of these animals is nearby, the individual with genophobia experiences the same sensations when exposed to a sexual practice.

This first assessment is important, because without it we could fall into the error of interpreting genophobia by other criteria such as lack of libido, lack of sexual interest or sexual repression.

Evidently, all these factors may appear in genophobia, however, they do not constitute the genesis of the disorder.

Genophobia itself is an anxiety disorder in which the person is unable to control their feelings of fear when exposed to sexual practice.

When we talk about fear of sex, all people can see us more or less identified.

In fact, sexual practice is often a relevant moment in the lives of people.

In this way, experiencing sensations of fear or nervousness when you have never had sex and you intend to do so or the first time you sleep with your partner is completely normal.

So, at its root, fear or nerves with regard to sexual relations makes a natural response of human beings.

However, when we speak of genophobia we do not refer to these “slight” sensations of nerves that are experienced before having sex.

Genophobia implies a much higher anxiety response and the experimentation of an extremely intense fear.

In this way, this disorder can be interpreted as the maximum accentuation of the normal sensations of nerves, which end up becoming an excessive and irrational fear.

What kind of fear is experienced in genophobia?

One of the main points that define genophobia and that allows us to differentiate it from the “normal” nerves that people can experience before having sexual relations is the type of fear that manifests itself.

The fear of genophobia has some main characteristics that allow it to be classified as pathological and to determine the presence of a phobic response to sexual practice. 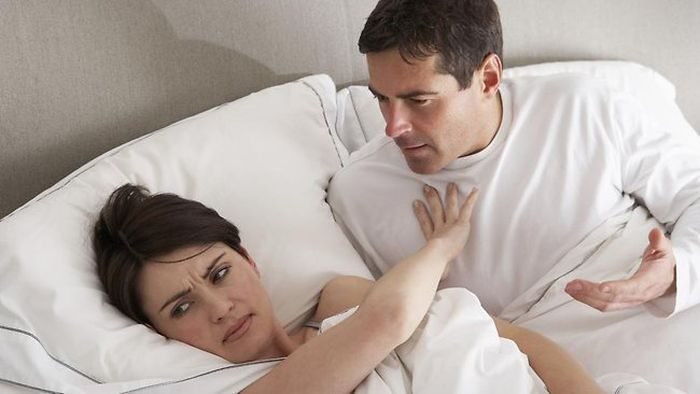 The main properties that define the fear experienced by a person with genophobia are the following:

The fear experienced by a person with genophobia is totally disproportionate to the demands of the situation.

Obviously, a priori, having sex does not imply any type of threat to people.

Thus, being afraid in these situations can be interpreted as disproportionate because, in and of itself, there is no stimulus that could put us in danger.

However, the fear experienced in genophobia is totally disproportionate, so the person with this disorder will respond with maximum fear and with thoughts that terrible things will happen to him, when in reality it is not so.

2- It can not be explained or reasoned

This is another of the key points of genophobia, since the fear experienced in this disorder implies that the individual is able to explain or reason.

When people have simple nerves in the previous moments of having a sexual relationship, we are able to explain or reason why we are nervous.

“I do not know if my partner will enjoy, maybe I do it badly, I want the sexual relationship to go well …” are some of the thoughts we can have at those moments.

However, the person with genophobia is not able to make these kinds of interpretations about the fear he experiences, since it is so intense that it moves away from any logic even for the individual.

3- It is beyond voluntary control

The ability to control is one of the main characteristics of all phobias and, therefore, also of genophobia.

When we have nerves or slight sensations of fear before sexual practice, we always maintain a certain capacity for control that allows us to avoid that fear takes over us completely.

However, in genophobia this does not happen and the ability of control that the individual has over their fear is non-existent.

The person is not able to control neither their feelings of fear nor their anxiety responses, so they take over automatically.

We must bear in mind that the fear experienced by a genophobic is so intense that it totally incapacitates him to have sexual relations.

In the face of sexual practice, the person with genophobia experiences the highest sensations of discomfort that he or she may experience, so that he or she will completely avoid this type of situation from occurring.

This does not mean that the individual does not have sexual impulses or even desires to perform sexual activities.

However, due to the fear that it produces, the person will avoid having sexual relations.

If we experience this type of fear in isolation or simply in some cases, we do not suffer genophobia.

The fear and anxiety response that is experienced before sexual intercourse in genophobia persists over time, so they always appear without exception.

Likewise, fear is not specific to a particular phase or age, so it is experienced in adolescence, as well as in adulthood and even in old age.

What happens to a person with genophobia when they are willing to have sex?

The fear that we have discussed in the previous section automatically generates an anxiety response.

Thus, whenever a person with genophobia is exposed to a sexual relationship and experiences the sensations of fear, it will manifest a series of symptoms of anxiety.

These symptoms are highly important since they are the ones that explain the discomfort of the individual when exposed to sexual practice and, therefore, the refusal to maintain relationships.

The main manifestations that a person with genophobia will experience when preparing to have sexual relations are:

These are probably the most important since they are the ones that cause the greatest feelings of discomfort.

When a person with genophobia is exposed to sexual intercourse, he will respond with the typical physical symptoms of anxiety.

These are characterized by an increased activity of the central nervous system and include symptoms such as increased heart rate and respiratory rate, excessive sweating, muscle tension, heart palpitations, headaches, etc.

The physical symptoms discussed are accompanied by a series of thoughts that feed on them.

In this way, in the genophobia, a series of catastrophic thoughts appear both about the sexual practice itself and about the personal abilities to cope with that situation.

These thoughts can adopt thousands of modalities, but all of them have a high component of aversion, fear and fear.

These cognitions, in addition, feed bi-directionally with the physical symptoms.

This means that catastrophic thoughts increase physical symptoms and nervousness, and the anxious symptomatology itself also increases this type of thoughts.

The last manifestation that a person with genophobia presents is the alteration of their behavior.

The high fear that suffers on the sexual act causes that it avoids it completely, reason why the behavior is modified remarkably.

The individual can start romantic relationships and even maintain them, however, avoid and reject any action that involves sexual activity.

The factors that can induce the appearance of phobias are numerous and it is usually not usually possible to identify a single cause.

It is generally argued that direct conditioning, vicarious conditioning, the acquisition of information and, in some cases, the presence of genetic components are usually the most relevant factors.

However, in the case of genophobia, the experience of traumatic experiences with sex rises as the most prevalent factor and originates a greater number of cases of genophobia.

Likewise, the acquisition of bad sex education and the adoption of myths or false beliefs about the sexual act are another of the most important causes of genophobia.

Currently there is enough scientific evidence to claim that regardless of the causes that cause the phobia, the main factor that maintains it is the avoidance of the phobic stimulus.

This means that, in the case of genophobia, the factor that causes it to remain and not disappear is the avoidance of sexual relations.

For a person with genophobia, avoiding their phobic stimulation can be more or less simple, since they simply have to limit themselves to not having sex.

Thus, the fact of never exposing oneself to sexual practice causes the phobia to be maintained and the person is totally incapable of having sexual relations.

How should it be treated?

Genephobia is an anxiety disorder that must be treated for two main reasons.

In the first place, because suffering from sex phobia can have a large impact on a person’s life, limit their functionality and reduce their quality of life and the quality of their relationships.

Secondly, it is highly recommended to treat genophobia because psychological therapy has been shown to be very effective in intervening this type of disorders.

In this way, despite all the negative aspects that we have discussed so far on genophobia, the most positive of all is without doubt that this psychopathology can be reversed.

Thus, trying to take anxiolytics to reduce the anxiety produced by the phobic stimulus or trying to avoid sexual practice altogether in order to be well is not the best solution.

The intervention that should be made by every person suffering from genophobia consists of doing psychotherapy through a clinical psychologist specialized in this type of disorders.

And it is that cognitive behavioral treatment has shown to be very effective for the treatment of specific phobias.

Also Read: The 53 Best Movies about Drugs and their Effects

These treatments usually mix live exposure interventions and imagination and exposure to phobic stimulation (to sex) with other techniques such as relaxation training, deep breathing and cognitive therapy.