Here we will talk about Human Brain Functions and its parts. The human brain is the central organ of the nervous system, located in the head of the human being and protected by the skull.

It has the same general structure and anatomy as the brain of other mammals, but with a more developed cerebral cortex. 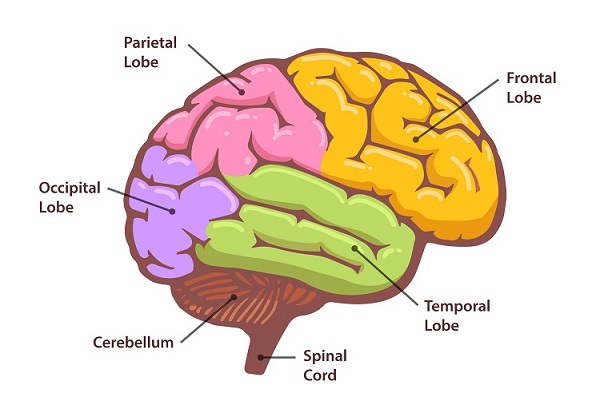 Larger animals such as whales or elephants have larger brains in absolute terms, but when measured using the encephalization coefficient , which compensates for body size, the ratio of the human brain is almost double that of the dolphin Common and three times larger than the chimpanzee.

Most of the expansion is due to the cerebral cortex, especially the frontal lobes, which are associated with executive functions such as reasoning, planning, self-control, and abstract thinking.

The visual cortex, the part of the cerebral cortex dedicated to vision, is also broader in humans.

Parts of the brain and their characteristics

Much of the physiological functions of the brain involve receiving information from the rest of the body, interpreting it, and guiding the body’s response. He is the ultimate responsible for the thought and movement that the body produces.

The types of stimuli that the brain interprets include sounds, light, smells, and pain.

The brain also intervenes in vital operations such as breathing, releasing hormones or maintaining blood pressure.

It allows humans to successfully interact with the medium by communicating with others and interacting with inanimate objects.

The brain is composed of nerve cells that interact with the rest of the body through the spinal cord and nervous system.

In addition, in the brain are several chemical compounds that help the brain maintain its homeostasis.

The main parts of the brain will be discussed below.

It is the integrating part of afferent and efferent information.

The cortex is almost symmetrical and is divided into the right hemisphere and the left hemisphere.

Conventionally, scientists have divided it into 4 lobes: frontal, parietal, occipital and temporal.

However, this division is not by the actual structure of the cerebral cortex, but by the bones of the skull that protects it.

The only exception is that the frontal and parietal lobe are separated by the central sulcus, a fold where the primary and motor somatosensory cortex is joined.

The different areas of the cerebral cortex are involved in different behavioral and cognitive functions.

The frontal lobe is one of the 4 lobes of the cerebral hemisphere.

This lobe focuses on movement, calculation, orientation and certain types of recognition.

If an injury occurs in this area, you may have disabilities to do simple daily tasks.

The motor cortex: allows the brain to control body movement. It is located in the upper middle part of the brain.

The sensory cortex: it is located in the frontal part of the parietal lobe and receives information from the spinal cord on the position of several parts of the body and how they move. This region can also be used to convey sense of touch information, including pain or pressure, which affects different portions of the body.

It includes areas that help control speech and listening skills, behavior and language.

The Wernicke area is a portion of the temporal lobe that is found around the auditory cortex and formulates and understands speech.

The occipital lobe is located at the back of the head and controls vision.

An injury in this area can lead to difficulties in reading.

It is located in the walls of the cerebral hemispheres and in it are the centers of correlation and coordination that regulate the rhythm of movements, facial expressions during communication.

Much of the hormonal responses that the body generates begin in this area.

Hypothalamus: it includes centers that regulate the internal balance and the homeostasis of the organism. It controls mood, temperature, hunger and thirst.

Amygdala: give an answer to the emotions, fear or memories. It is a large portion of the telencephalon.

Hippocampus: Its main functions are learning and memory, specifically to convert short-term memory into long-term memory.

The thalamus is a relay center that controls the attention through which afferent stimuli pass to consciousness.

Trunk of the brain

All vital life functions originate in the brainstem including blood pressure, breathing and heartbeat.

In humans, this area contains the medulla, midbrain and protuberance.

Spinal bulb: its functions include the transmission of impulses from the spinal cord to the brain. They also regulate cardiac, respiratory, gastrointestinal and vasoconstrictor functions.

The cerebellum is also known as the “small brain” and is considered the oldest part of the brain on the evolutionary scale.

Functions of the human brain

The main function of the brain is to keep the organism alive so that it interacts with the environment.

Everything that the human being thinks, feels and does has to do with specific functions of the brain.

These functions can be:

Information is received from the stimuli and processed.

The stimuli of external or internal origin are captured through different receptors.

These receptors transform the stimuli received by energy signals.

The motor cortex is located in the frontal lobe, in front of the Rolando fissure.

They refer to mental activities such as attention, memory, learning or language.

Most patients who suffer some type of brain damage lose some behavior or cognitive ability.

Understanding the body-mind relationship is both a philosophical and a scientific challenge.

It is complicated to understand how mental activities such as emotions and thoughts can be implemented by real physical structures such as neurons or synapses.

This is what led Rene Descartes and most of humanity later to believe in dualism: beliefs that the mind exists independently of the body.

However, there is substantial evidence against this argument.

Injuries of the brain can affect the mind in different ways, thus being interrelated brain and mind.

For example, the cortical stimulation that occurs in epilepsy also causes the appearance of complex sensations such as flashbacks, alucionations and other cognitive phenomena.

Therefore, most neuroscientists tend to be materialistic; they believe that the mind is reducible to a physical phenomenon.

The main brain areas of speech are the Broca area and the Wernicke area.

Magnetic Resonance Imaging of the Brain

The brain consumes 10 times more energy than it should by considering its size.

According to scientist Marcus Raichie of the University of Washington, 60-80% of energy consumed by the brain is dedicated to maintaining the connection between different neurons, while the rest of energy is dedicated to respond to the demands of the environment.