The development of the human nervous system (NS) is based on a sequential program and is governed by pre-programmed, clear and well-defined principles. The organization and formation of the nervous system is the product of genetic instructions, however, the interaction of the child with the outside world will be decisive in the later maturation of neural networks and structures.

The correct formation and development of each of the structures and connections that form our nervous system will be essential for prenatal development. When any of these processes is interrupted or develops in an abnormal way due to genetic mutations, pathological processes or exposure to chemicals, there may be important congenital defects at the brain level.

Development of the human nervous system

In development of this complex system two main processes are distinguished: neurogenesis (each part of the NS conforms) and maturation.

From the moment fertilization takes place, a cascade of molecular events begins. Around 18 days after fertilization, the embryo consists of three germ layers: epiblast, hypoblast (or primitive endoderm) and amines (which will form the amniotic cavity). These layers organize into a bilaminar disk (epiblast and hypoblast) and form a primitive streak or primary groove. 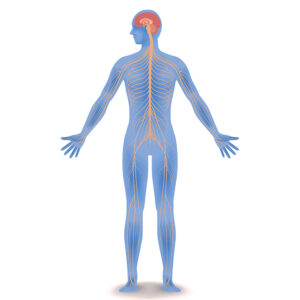 At this moment, a process called gastrulating takes place, resulting in the formation of three primitive layers: ectoderm (outermost layer, consisting of epiblast remains), mesoderm (intermediate layer that brings together primitive cells that extend from epiblast and hypoblast Which is inv@ginated forming the midline) and endoderm (inner layer, formed with some cells of the hypoblast). The inv@gination of the mesodermal layer will be defined as a cylinder of cells along the entire midline, notochord.

In a second developmental process called neurulation, the ectoderm becomes thicker and forms a cylindrical structure, called neural plaque. The lateral ends will fold inwards and with the developed it will be transformed into the neural tube, approximately at 24 days of gestation. The caudal area of ​​the neural tube will give rise to the spine; The rostral part will form the brain and the cavity will constitute the ventricular system.

Once the main structures of the NS have been formed, the occurrence of a process of brain maturation is essential. In this process, neuronal growth, synaptogenesis, programmed neuronal death or myelination will be essential events.

Even in the pre-natal stage a maturation process occurs, however, this does not end with the birth. This process culminates towards adulthood, when the axonal myelination process ends.

After birth, after about 280 days of gestation, the development of the nervous system of the newborn should be observed both in the motor behaviors and in the reflexes that it expresses. The maturation and development of cortical structures will be the basis for the subsequent  development of complex cognitive behaviors.

After birth, the brain undergoes rapid growth, due to the complexity of the cortical structure. At this stage, dendritic and myelinizing processes will be essential. Myelinating processes will allow rapid and precise axon conduction, allowing efficient neural communication.

The process of myelination begins to be observed at 3 months of fertilization and occurs progressively at different times according to the region of development of the nervous system, not occurring in all areas alike. However, we can establish that this process occurs mainly in the second childhood, period between 6 and 12 years, adolescence and early adulthood.

The first structures that are completely militated will be in charge of controlling the expression of reflexes, while the cortical areas will complete later.

We can observe the first primitive reflex responses towards the sixth week of gestation in the skin surrounding the mouth in which, when making contact, a contralateral flexion of the neck occurs.

Related :What is Trancranial Magnetic Stimulation?

This sensitivity in the skin extends over the next 6 to 8 weeks and reflex responses are observed when it is stimulated from the face to the palms of the hands and the upper region of the thorax. By week 12 the entire surface of the body is sensitive except for the back and crown. Reflex responses also change from more generalized movements to more specific movements.

Between cortical areas, primary sensory and motor areas, myelination will begin in the first place. Projection and commissural areas will continue to form until 5 years of age. Then, the frontal association and parietal will complete its process around 15 years of age.

As myelination develops, that is, the brain matures, each hemisphere will begin a process of specialization and is associated with more refined and specific functions.

Both the development of NS and its maturation have identified the existence of four secular mechanisms with which they are the essential basis of their occurrence: cellular proliferation, migration and diffusion.

In conclusion, the formation of the nervous system occurs in precise and coordinated stages, ranging from pre-natal stages and extending into adulthood.