The sleep disorders are problems related to the fact sleeping and include difficulty falling asleep or staying asleep (insomnia), have too much sleep during the day (hypersomnia) and abnormal behaviors during sleep (parasomnias).

These sleep diseases are more common than is believed and can very negatively affect the life of the sufferer. The person, who cannot sleep well at night and get a restful sleep, for whatever reason, will feel tired and drowsy during the day, which can lead to serious problems to perform daily tasks, to cause accidents or traffic.

The most frequent sleep disorders are insomnia, sleep apnea, and restless legs syndrome. 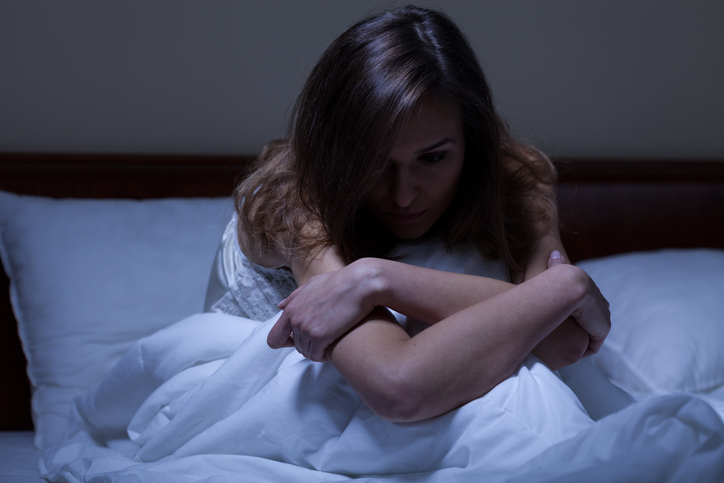 All people, at some point in their lives, have had trouble falling asleep or staying asleep all night. This disorder is called insomnia and can be caused by a temporary situation (stress or anxiety by specific situations) or become a chronic disorder.

If you have difficulty falling asleep most nights, if you feel that you do not rest well and you feel exhausted just waking up, if you continue to get tired all day or wake up several times in the morning, you are likely to have problems of insomnia.

On the other hand, if you are not sleeping eight hours, this does not mean that you have insomnia or another sleep disorder. Each person has different sleep needs, some sleep only 6 hours and with that, they already feel well throughout the day, others need to sleep 8 to 9 hours to rest properly while others need to sleep a few hours more.

The hyperthyroidism, depression, bipolar disorder or other psychiatric disorders can cause insomnia. Chronic or acute pain or physical discomfort, stress, and anxiety can also cause sleep problems.

On the other hand, bad habits related to bedtime are another frequent cause of insomnia. To avoid them, it is a good idea to always go to bed at the same time, exercise, avoid naps, do not work during the afternoon or evening, and avoid watching television or being in front of the computer screen immediately before going to sleep.

Finally, smoking, caffeine, alcohol, or other drugs can also cause insomnia.

The doctor should do a complete physical examination and ask questions to find the cause of insomnia so that you can determine the appropriate treatment to combat it.

The first thing is to check habits related to sleep, drugs or any condition that could be the cause of insomnia. Sometimes, changing habits or lifestyle is enough to correct insomnia.

In other cases, it is necessary to correct the condition that is causing it, such as hyperthyroidism or depression for example, with specific medications.

Finally, the psychiatrist may prescribe anxiolytic or other medications to help the person to fall asleep and sleep better.

There are also over-the-counter products that can help fight insomnia, such as melatonin, products with L-tryptophan or valerian extracts. Although it is not very clear how effective these natural treatments are, in theory, they are harmless, so that nothing is lost with testing.

This disorder is quite common and occurs when the person makes prolonged pauses in the breathing while it is asleep. Pauses occur when the upper airway collapses and can last for a few seconds or a couple of minutes.

When the person finally breathes again, loud snoring or sound similar to that made by a person when they are choked is usually heard.

Sleep apnea is a generally chronic condition that alters the quality of sleep and that is why people who suffer from sleep apnea feel sleepy and tired all day long.

Many times sleep apnea is difficult to diagnose because it only happens when the person sleeps. In many cases, it is the patient’s relatives who notice the prolonged pauses and subsequent heavy snoring in people with sleep apnea.

However, it should be noted that not all people who snore suffer from sleep apnea.

Another possible symptom of this condition is tiredness during the day and the sensation of not having rested properly during the night. Sleep apnea usually occurs in people who are overweight or obese, and it is more common in men.

As mentioned above, sleep apnea is often caused by an obstruction or temporary collapse of the upper airway, causing a shallow breathing or breathing pauses.

There is another type of sleep apnea, caused by a failure in the part of the brain that sends the signals to the muscles of the breath to work properly, but this condition is much less common.

Changes in lifestyle, certain breathing devices, oral devices or even surgery can be good treatment options for sleep apnea.

Do you feel at night, when you go to sleep, an unpleasant feeling in your legs that forces you to move them, to get up or even to walk?

Do not worry, you’re not going crazy. This is restless leg syndrome and is much more common than is generally believed. This syndrome was described as early as the eighteenth century and is still an undiagnosed condition today.

This syndrome is among the first causes of difficulty in falling asleep.

They include tingling sensation in the legs, spontaneous and uncontrollable movements, itching sensation, pain or palpitations in the lower limbs, or crawling, crawling, pulling or milking sensations, which can last for an hour or more.

These feelings get worse at night when lying down, occur sometimes during the day and may also appear on the upper legs, arms or feet. They usually disappear when you move your legs or stretch them, but come back as soon as you leave them still.

Symptoms can also appear when the person is sitting for long periods, during a plane trip or a long meeting, for example.

Most people with this syndrome also perform rhythmic movements with their legs while they sleep. In this way, sleep is not restorative and the person feels daytime drowsiness, confusion or difficulty to think clearly.

It is not known exactly what the cause of restless legs syndrome is, although it has been proven to have an important genetic component and many times there are several affected in the same family.

It is likely due to a processing defect of dopamine in certain brain cells since dopamine is a neurotransmitter related to muscle movement.

People with chronic kidney disease, diabetes, iron deficiency, or multiple sclerosis may be at increased risk for this condition.

There is no specific test for the diagnosis of this disease. The doctor will review the patient’s medical history and ask questions to guide the diagnosis.

The restless legs syndrome also has no cure, however, there are some treatments that can relieve the symptoms, and they are:

Apply cold or hot compresses on the legs.

Relaxation techniques like yoga, meditation or other ways to relieve the stress of the day.

Avoid caffeine, alcohol, and tobacco, because they can make the symptoms worse.

Some medications such as pramipexole, ropinirole, or low-dose narcotics may be prescribed to control feelings and involuntary movements in the legs so that you can sleep better.

There are more than one hundred sleep disorders, but in addition to those mentioned above; some of the most common are described below.

Bruxism is a disorder of mandibular movement that often occurs during sleep and is characterized by squeezing jaws and grinding teeth while sleeping.

Bruxism can be caused by anxiety, stress, smoking or alcohol, the presence of other sleep disorders, changes in the anatomy of the jaws or other Bucco-facial structures.

Bruxism can alter the quality of sleep and the sufferer usually gets up in the morning with a headache, pain in the muscles of the jaws or in the jaw joints.

To avoid this, there are several models of splints that prevent grinding of the teeth. Muscle relaxants can also be helpful in these cases.

It is the disorder that occurs when the person gets up, walks or performs other activities while totally asleep.

Sleep has several stages, from mild drowsiness to deep sleep. Sleepwalking usually occurs in the stages of a deep sleep, during the first three or four hours of sleep.

Sleepwalking is quite common in children and is associated with fatigue, anxiety, and lack of sleep. In adults, it can be triggered by medications, alcohol or mental disorders.

During the episode, the person walks and can perform usual activities such as going to the bathroom, moving furniture, dressing or undressing with eyes open as if awake. The episode may be brief or last longer than 30 minutes, although in most cases it lasts less than 10 minutes.

If he is not disturbed, the sleepwalking patient returns to sleep, although it can do so in unusual places.

There is no treatment for somnambulism itself, but if the episodes occur frequently, the doctor must determine if there is another underlying condition and indicate the appropriate treatment.

It is the feeling of extreme and uncontrollable drowsiness that occurs during the day.

People who suffer from narcolepsy often cannot avoid falling asleep suddenly, anytime, anywhere. The sleep episode can last us a few seconds or a few minutes. After the same, the person feels with renewed energies, without sleep.

People with narcolepsy also often have episodes of cataplexy, during which they cannot voluntarily move their muscles for a few seconds or a couple of minutes. During this type of episode, the patient remains conscious.

The causes that cause this condition are not clear, but it is probable that there is a hereditary component. Certain changes in lifestyle and some medications may help control symptoms, although narcolepsy has no cure.

Read About What is Memory the Human Memory?

It occurs when a person feels excessive sleep during the day. It may be due to sleep problems at night or it may also be idiopathic hypersomnia.

In the latter case, the daytime sleep sensation does not improve with naps.

If you have difficulty waking up from prolonged sleep, sleep more than 12 hours daily or feel very sleepy during the day, even in the middle of a conversation or a meal, then you are likely to suffer from hypersomnia.

Treatment for this condition may include some of the drugs commonly used to treat narcolepsy.

Certain changes in lifestyle habits may also help. If you have hypersomnia, try to avoid work at night, social occasions that delay bedtime and avoid the use of alcohol or other drugs.

If you have identified yourself with the symptoms of any of the described sleep disorders, consult your GP. If you do not sleep well at night you will not only feel drowsy during the day, but you will also have a much-increased risk of having a traffic accident or an accident at work.

And remember, lying down at the same time and maintaining a proper sleeping environment, with low light and no noise, also promotes restful sleep and helps overcome many of the sleep disorders.

And what symptoms or problems have you experienced? I’m interested in your opinion. Thank you!