In this type of pathology there is a minimal, but detectable, presence of consciousness, both of oneself and of environmental circumstances  (Spanish Brain Injury Federation, 2014).

In the state of minimal consciousness, some of the most characteristic features are: fixation or eye tracking, gestural or vernal answers yes / no,  execution of simple orders, motor and emotional responses and an intelligible language (Spanish Federation of Brain Injury, 2014 ). 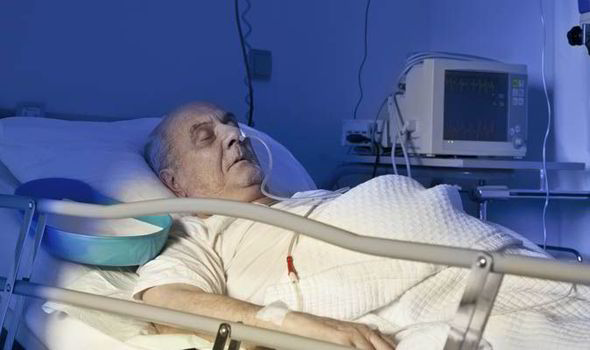 With regard to statistical data, approximately 30% to 40% of people with brain damage have serious alterations in their  level of consciousness. . The causes of this type of alterations can be diverse, they can be originated by focal or diffuse lesions, specifically in  the brainstem or in related structures, such as the thalamus and the association cortex (Más-Sesé et al., 2015).

What is a disorder of consciousness?

Throughout the evolution of scientific and medical literature, the term conscience has generated great controversy. Currently, consciousness can  be defined as a state in which a particular individual has knowledge of himself and his environment (Puerto-Gala et al., 2012).

In addition, in the definition of conscience, consideration of the terms of arousal and awarness are essential:

– Arousal : with this term we refer to the alert level, understood as “being aware” and is responsible for maintaining the ability  to be awake and regulate sleep-wake rhythms (Más-Sesé et al., 2015).

– Awareness : with this term, instead, we refer to alert, understood as “the conscious being” and refers to the ability we  have to detect the stimuli from the environment and be aware of them and ourselves (Más-Sesé et al., 2015).

What is the state of minimum consciousness?

The term minimal consciousness state that currently replaces the term ” minimal response status ” was defined  by the American Congress of Rehabilitative Medicine in 1995 (Laureys et al., 2001).

This is used to catalog patients who are not able to communicate or follow instructions optimally and functionally, but show  evidence of inconsistent but detectable behavior in the face of external stimulation (Laureys et al., 2001).

How many people are in a state of minimal consciousness?

In Spain, the concrete figures of people in a state of minimal consciousness are not known exactly.

What are the signs and symptoms of the state of minimum consciousness?

Patients who are in a state of minimal consciousness may show visual fixation and emotional or motor behavior contingent on the  presence of specific stimuli (Laureys et al., 2001).

Although in this state, patients are not able to communicate in a functional way, they are able to follow some simple instructions, perform  compressible verbalizations (Grosseries et al., 2011), gestural or verbal yes / no responses (Laureys et al., 2001).

In some occasions they may show precipitated crying due to the presence of familiar voices and also smiles or laughter (Grosseries et al., 2011).

Although all these signs are different from the reflex responses, it will be necessary that these behaviors are reproduced in a frequent and contingent manner to  different environmental demands.

Regarding the neurobiological level, in the state of minimum consciousness, cerebral metabolic activity was reduced by around 20-40% (Laureys et al.,  2004, Grosseries et al., 2011). In addition, autonomic functions are maintained (respiratory, cardiac breathing, etc.).

Classification for the state of minimum consciousness

In people who are in a state of minimal consciousness we may detect different levels of severity depending on the level of  surveillance and knowledge of the environment and observable signs that shows (International Brain Injury Association, 2021):

What is the cause of the state of minimum consciousness?

Injuries in the ascending reticular system

In general, all disorders of consciousness occurs as a result of injuries at the level of the central nervous system.

Specifically, lesions in the ascending reticular system ( SRRA ), will seriously impair levels of alertness and the  ability to stay awake (De Castro, 2008).

The ability of human beings to think, perceive, and respond to stimuli is due to the functioning of the cerebral cortex, but  this will not show an efficient execution if the participation of other structures and without the maintenance of a state of adequate alert. When  we are sleeping, it is necessary that the SRAA activates the cortex to wake us up (Hodelín-Tablada, 2002).

Any injury in the structures that comprise it will suppose a decrease or loss of the level of consciousness (Castro, 2008). Conscience is  impossible if the SRRA is seriously injured or damaged (Hodelín-Tablada, 2002).

They have identified a multitude of causes that can lead to the suffering of injuries and damage to the brain. Among the most common are:

– Anoxic encephalopathy: due to various causes such as cardiorespiratory arrest.

How is the state of minimum consciousness diagnosed?

To determine the level of consciousness, the possible presence of anatomical lesions and each of the criteria detailed above, several diagnostic methods are usually  used.

To establish the future prognosis and consequently the pertinent neurological rehabilitation, it is fundamental to make a differential diagnosis between  the different altered states of consciousness (Grosseries et al., 2011).

The fundamental method to identify signs of consciousness is clinical observation. In patients with altered states of consciousness in the acute phase, it  is essential to obtain all the information about their cognitive progress (Grosseries et al., 2011).

To examine this area, the use of diagnostic scales, based on behavioral evaluations, is frequent.

Some of the most used scales are:

– Scale of absence of response (The Full Ourline of Unresponsiveness -FOUR-).

However, the purely behavioral evaluation does not offer us a definitive diagnostic judgment about the presence or absence of signs of consciousness.

It is possible that by employing these methods exclusively differential diagnoses are made erroneous and even emission of false positives, since the  absence of response is not always an indicator of absence of consciousness and on the other hand, neither the motor responses can be interpreted as  unambiguous signs of consciousness, since they can constitute an erroneous interpretation of spontaneous movements and reflexes.

Therefore, for the realization of a suitable and precise differential diagnosis, it is fundamental to use other methods such as brain activity and image  .

– Electroencephalography: is a non-invasive method that records the brain’s electrical activity through electrodes that are placed  on the scalp of the person. It allows us to identify alert or vigilant states, and anomalous activities such as seizures. It is also used  to confirm the diagnosis of brain death, identifying the complete absence of brain activity (Grosseries et al., 2011).

– Evoked potentials : the evoked potential technique examines the cognitive function of the patient through electrical brain activity  with the use of electroencephalography (Grosseries et al., 2011).

In the case of the state of minimum consciousness there is a wide variety of diagnostic criteria that may differ depending on the organization or entity  that produces them, some of them are (Noé-Sebastián et al., 2012):

– Presence of a response or behavior congruent to a simple order, question, gesture or external stimulus.

– The answer must be clearly congruent. There must be evidence that such responses are produced as a result of an order, question or
stimulus.

– The response must be observed on more than one occasion during the assessment or evaluation.

Criteria of minimum status of the Aspen Neurobehavioral Conference Workgroup (1995)

– Verbal or gestural answers yes / no.

– Presence of stereotyped movements (blinking, smiling, etc.) in response to a stimulus.

– Verbal or gestural answers yes / no.

– Behaviors aimed at a goal or affective responses in response to relevant stimuli:

Treatment for the state of minimum consciousness

Although there is no specific therapeutic measure that provides a cure to a state of minimal consciousness, in all cases, the measures  used will depend both on the severity of the brain injuries that are present and the future prognosis.

In the initial phases, the prevention of complications and the maintenance of bodily integrity is fundamental. In this phase, pharmacological interventions that stabilize the vital signs of patients are usually used  .

As soon as the patient is medically stabilizing, the use of neuropsychological measures of rehabilitation type is fundamental through  programs of multisensory stimulation and recovery of residual cognitive functions.

Specifically, some specialists point out that it is essential to make efforts to establish a communication and functional interaction of the patient with  the environment.

What is the prognosis of patients in a state of minimal consciousness?

In many cases, the affected person remains for years in a state of minimal consciousness, mainly due to the presence of serious and irreversible brain damage  .

However, there are cases in which patients are able to achieve functional communication, follow instructions progressively or use  different objects. When the complexity of the patient’s responses is increasing, we can consider that he is in an emergency phase of the  state of minimum consciousness.

In cases of recovery, those affected usually show a period of confusion and progressive functional recovery.