The inhalant drugs  are volatile substances that produce chemical vapors that may be inhaled to cause a particular psychoactive effect. They are therefore substances whose main use is not consumption. However, when inhaled they produce effects similar to those of drugs designed or used for recreational purposes.

Evidently, this defining characteristic of inhalant drugs covers a wide range of chemical substances. In fact, nowadays, multiple elements that can be inhaled and produce psychoactive effects have been described.

Some examples of inhaled drugs are glues, gasolines, paints or deodorants, among many others. Each of the substances that make up this type of psychoactive elements can cause different effects.

The fact that inhaled drugs are not products designed for consumption and recreational use, motivates a high unpredictability of its effects and consequences.

The consumption of these substances is increasingly prevalent in our society. The main factors that motivate the increase in consumption is the reduced price of inhalants compared to other types of drugs. 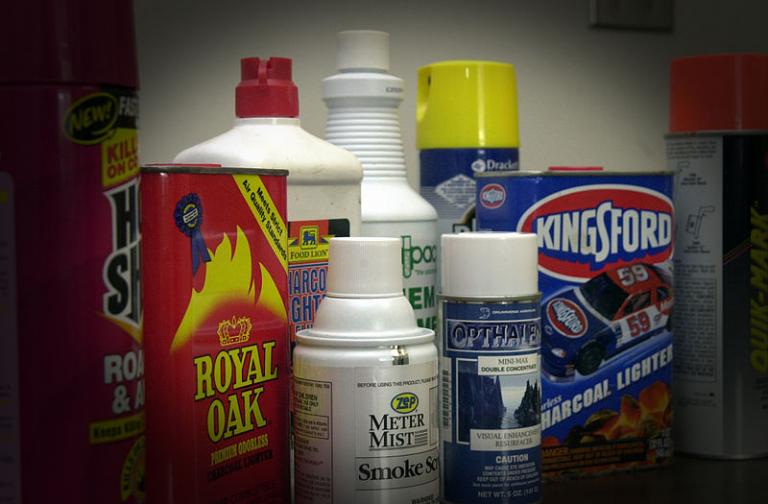 In this sense, the classification and determination of the characteristics, effects and consequences of inhaled drugs is one of the main topics of interest in drug addiction research.

In this article the types of inhalants that have been described today are discussed and reviewed, their characteristics, their effects, their prevalence and the medical consequences they cause.

The classification of inhaled drugs is one of the main complications that these substances present. There are many elements that can cause psychoactive effects when inhaled, so that achieving them in categories is highly complex.

Given this situation, despite its limitations, the classification system that has obtained greater scientific evidence proposes four categories.

These categories lie mainly in the characteristics of the substances and not so much in the psychoactive effects or the consequences that their consumption originates.

In this sense, inhalant drugs can be grouped into four different types: volatile solvents, aerosols, gases and nitrites.

Volatile solvents are liquid substances that vaporize at room temperature.

They can be found in a wide variety of affordable and easily accessible products, which is why their consumption is simple and increasingly prevalent in society.

Volatile solvents include products for domestic and industrial use, such as: thinners, paint removers, dry cleaning liquids, degreasers, gasoline, glues and liquid correctors.

Obviously, these elements are not produced or marketed for recreational purposes. Its functions are not intended for consumption, however, if inhaled produce psychoactive effects, so they can act as drugs.

The aerosol is a colloid of solid or liquid particles suspended in a gas. In fact, the term aerosol refers to both the particles and the gas in which they are suspended.

Thus, these substances are sprinklers that contain propellants and solvents. Some products with these characteristics are spray paints, deodorants, hair fixers, cooking oil sprinklers or sprinklers to protect fabrics and fabrics.

Its consumption is done through the same route as the rest of inhaling drugs, that is, inhalation. The administration of these substances can cause important psychoactive effects.

Gases are substances of low density that can extend indefinitely. Inhalant gases include multiple substances that, when consumed, cause direct effects on the functioning of the brain.

The most consumed are medical anesthetics such as ether, chloroform, halothane and, above all, nitrous oxide.

Other gases consumed as inhalant drugs are household and / or commercial products such as butane lighters, propane tanks and refrigerants.

Nitrites are substances formed by salts or esters from nitrous acid. These elements appear by biological oxidation of amines and ammonia or by reduction of nitrate in anaerobic conditions.

This type of substances deserve a differentiation from the rest of inhalant drugs, since they produce different effects. Unlike volatile solvents, aerosols and gases, nitrites do not act directly on the central nervous system when consumed.

The nitrites perform a wide dilation of the blood vessels and relax the muscles, so they are not consumed to alter the mood, but the state of the body.

In this way, elements such as cyclohexyl nitrite, isomalic nitrite or isobutyl nitrite (popularly known as “poppers”) are inhaled mainly to intensify sexual pleasure.

Although amyl nitrite was previously used as a treatment for angina pectoris, the commercialization of these substances is now prohibited.

However, in the market you can easily find nitrite, marketed in small bottles and labeled as “video head cleaners” or “environmental perfumes”.

The defining characteristic of inhaled drugs is their mode of consumption. That is, they are substances that are administered through aspiration, either through the nose or through the mouth.

However, inhalation of these substances can be done in several ways. These modalities of consumption depend mainly on the qualities of the inhaled substance and the administration preference of the subject.

At present, 5 different types of consumption have been described:

It is the most used mode of consumption of inhaled drugs. Try to aspirate or inhale the vapors directly from the container.

In this case, if glue is consumed, for example, the lid of the container would be opened and the product vapor would be inhaled directly.

The spray technique is applied mainly in aerosols, due to the characteristics of these products.

The areosoles allow spraying the substances directly, so that for consumption the product is applied in the mouth or nose for substances to penetrate the body.

This form of consumption is somewhat more elaborate but not less used among the individuals who use these drugs.

Try to aspirate the vapors of substances that have previously been sprayed or deposited in a plastic or paper bag. In this way, a more direct contact with the vapors is achieved and the consumption of psychoactive substances is facilitated .

Inhaling products applied on a cloth

Similar to the previous modality, there are subjects who choose to apply the product on a cloth. Subsequently, the rag is applied in the mouth and / or nose, and the psychoactive substances that have been impregnated in it are inhaled.

Finally, nitrous oxide presents an extended mode of consumption different from the previous ones. In this case, the product is applied in a balloon, and the air inside it is sucked directly.

How many people use inhaling drugs?

The consumption of inhalants is a growing phenomenon in society. More and more people are opting for the use of these drugs to achieve effects on the central nervous system.

Inhalants are highly consumed among the younger population. In this sense, an American national survey determined that almost 3% of American children had already tried inhalants before 10 years of age.

Likewise, the consumption of these drugs can extend to adulthood and become chronic, so that the abuse of these substances can begin already at very early ages.

Another outstanding characteristic of inhalants is that they do not usually present a specific pattern of abuse. That is, an individual who consumes inhalants usually opts for any available inhalant drug, so it may not be limited to the abuse of a particular substance.

However, the effects of each inhalant drug are different and each individual may have a marked preference for a particular substance, although it also consumes other inhalants.

A study of observation of the future (MTF) reported that the age of greatest consumption of inhaled drugs is established between 12 and 15 years. Likewise, sex differences in the consumption of these substances at these ages do not seem to be observed.

However, in the adult stage (from 18 to 25) there is greater abuse of inhaled drugs in men than in women.

Thus, it is concluded that inhalant drugs are highly consumed substances. Between 13 and 14 years of age, these elements have a prevalence of abuse similar to m@rijuana (16%) and greater than cocaine or LSD.

From 16 years of age, its prevalence is reduced to approximately 10%, and is clearly exceeded by m@rijuana, which rises to 30-40%.

How do substances from inhaling drugs reach the brain?

Whatever the mode of consumption of inhalants, the result is the same. By aspiration, substances in the products are rapidly absorbed through the mouth or nose.

During the seconds after the consumption the individual experiences intoxication, due to the rapid arrival of the substances to the brain. Initial intoxication is characterized by a series of effects similar to those caused by alcohol.

Each of the inhaling drugs can produce different and varied pharmacological effects. However, most of them share a series of characteristics.

Inhalant drugs usually produce a rapid feeling of euphoria, accompanied by an initial excitement and followed by drowsiness, disinhibition, daze and agitation.

With high amounts, the consumption of inhalants produces anesthesia, loss of sensitivity, and extreme abuse can cause loss of consciousness.

Other symptoms that inhalant drugs can cause include belligerence, apathy, impaired judgment and maladaptive functioning.

On the other hand, recent studies have shown that people who consume these substances can also experience headaches, wobbles, confusion, delusions, nausea and vomiting.

Finally, inhaled nitrites cause somewhat different effects. They dilate the blood vessels, increase the heart rate, produce sensations of heat, excitation and cause symptoms such as flushing or dizziness.

The abuse of inhaled drugs for prolonged periods of time, usually generates a clear addiction.

The majority of consumers usually report a strong need to continue using inhalants. Prolonged abuse can lead to compulsive use of these substances.

Inhalant drugs can also cause withdrawal syndrome in the addicted person. However, it is less serious compared to that caused by other substances such as alcohol, cocaine or m@rijuana.

The abuse of inhaled drugs is a clear risk factor for a wide range of diseases. In fact, it is considered that the consequences of the consumption of these substances are devastating for the person.

The worst consequence that can cause the inhalation of substances is heart failure, which causes the syndrome known as “sudden death by inhalation.”

Other negative consequences of the consumption of these drugs include; Asphyxia, suffocation, seizures, coma, choking, gradual decrease in smell, violent behavior, hepatitis, difficulty in sphincter control and mortal trauma.

Finally, research on the effects of inhaling drugs shows that they are highly toxic. In this way, the habitual consumption of these substances damages in a high way the peripheral nervous system of the brain.