The Noonan syndrome (NS) is a genetic disorder such as it is transmitted from parents to children, being monogenic autosomal dominant inheritance. This means that, with only one parent containing the affected gene, the child can develop the disease. (Atilano, Santomé, Galbis, 2013).

Thanks to recent advances, we have been able to discover the genes involved in this disease and other comorbid ones. The latest research catalogs Noonan Syndrome as a subtype within a broad spectrum of diseases called “family of neuro-cardio-facio-cutaneous syndromes”. Neurofibromatosis type 1, the cardiofaciocutaneous syndrome or Costello syndrome, among others, are also part of this category.

Jacqueline Noonan was a pediatric cardiologist who investigated a number of patients with congenital heart disease.

In 1963 he published “Associated non-cardiac malformations in children with congenital heart disease”, where he described in detail a group of children who presented a characteristic facial phenotype, short stature and malformations in the thoracic cavity, in addition to heart problems. These children suffered what would later be called Noonan syndrome.

However, first it was called “Turner of males” thinking that it was Turner syndrome, until it was discovered that the latter arose from alterations in the sex chromosomes.

A student of Jacqueline Noonan, Dr. John Opitz, began using the term “Noonan Syndrome” when he detected in children the same traits that Noonan had previously described in his work.

So, in 1971, this denomination began to be recognized officially. Scientists gradually became aware of the differences between this disorder and other associates, and different diagnoses were made.

It was already in the 90s when an area of ​​the genome was detected that seemed to influence the origin of Noonan Syndrome, which facilitated its differentiation as a disorder independent of other conditions with which it was confused.

Thanks to several studies, markers were discovered in an area of ​​chromosome 12 called NS1, and later it was found that this disease is genetically heterogeneous (Atilano, Santomé, Galbis, 2013). Little by little they were defining more genes involved and their products, which are linked to the signs and symptoms that we are going to describe here.

Approximately it is known that it appears among 1 of 1000 or of 2500 live births in the whole world. It affects both sexes equally (McGovern, 2015).

According to Ballesta-Martínez (2010), the proportion of cases of Noonan Syndrome is not yet known, however, family cases have been documented between 30 and 75%. In the latter, the transmission is mainly maternal while the mutation of the allele transmission is usually by the father.

The mechanism that explains the appearance of this syndrome is not yet completely known. It seems to be associated with mutations in the signal transduction pathways of the RAS, MEK, RAF and ERK genes; that have an essential role in cell proliferation.

50% of patients also have mutations in the PTPN11 gene, while 13% have them in the SOS1 gene, and between 5 and 17% of cases appear in the RAF1 gene. Less commonly, mutations have also been detected in the NRAS, KRAS, BRAF and MAP2K1 genes (McGovern, 2015).

The way in which it is expressed can be very variable (Ballesta-Martínez, 2010). Noonan syndrome begins to manifest from birth, although age influences the facial phenotype. So it is more evident in childhood and softens again when it reaches adulthood (McGovern, 2015).

– Congenital heart disease: they appear in 80% of patients. It is related to thoracic deformity, valvular pulmonary stenosis and hypertrophic cardiomyopathy among other conditions.

– Regarding the neurological aspects, you can find in these patients: seizure disorders, hypotonia or peripheral neuropathy.

– In some cases (approximately 25%) intellectual deficit may appear. Although usually they are usually slightly below the average, with an IQ score of 86.1 (the average is between 90 and 110 points).

– Craniofacial dysmorphism, such as hypertelorism (excessive separation of the eye orbits) and elevated nasal bridge.

– Language articulation problems: influenced by the morphology of the palate (ogival palate), dental problems and poor control of the tongue.

– Strabismus and refractive errors (visual problems caused by alterations in the shape of the eyes typical of this syndrome).

– Abnormalities in the outer ear, which may include low set ears, rotated ear pads, protruding ears or thick helix.

– Skeletal alterations (Ballesta Martínez, 2010). Being able to present scoliosis or thorax in keel, which probably causes that the lungs and heart of the individual do not work correctly and fatigue more easily.

– Hypermobility  of the joints is frequent , being present in more than 50% of those affected.

– Hemorrhagic diathesis or greater ease for bleeding. Present in approximately 55% of those affected. Alterations in coagulation and platelet function may also occur (Ballesta-Martínez, 2010).

– In 25% of patients, Hepatosplenomegaly ( enlarged spleen and liver) can occur.

– Genitourinary effects: as cryptorchidism in men, which means that the testicles do not descend completely throughout the development. Approximately in 10% of the patients alterations in the kidneys can occur.

– Problems in the skin: as lymphedema, in which the skin appears inflamed or folded as a result of an accumulation of lymph inside the subcutaneous tissue. They also have, in 67%, outstanding pads on the fingers and toes; or follicular keratosis (rough skin) by 14%. Nevus, lentigines or “café con leche” spots can also be observed.

– Niemczyk et al proposed in 2015 that a significant proportion of children with Noonan syndrome showed urinary incontinence during the day (36.4%), nocturnal enuresis (27.3%) and fecal incontinence (11.1%). Something that seems to disappear when puberty arrives. 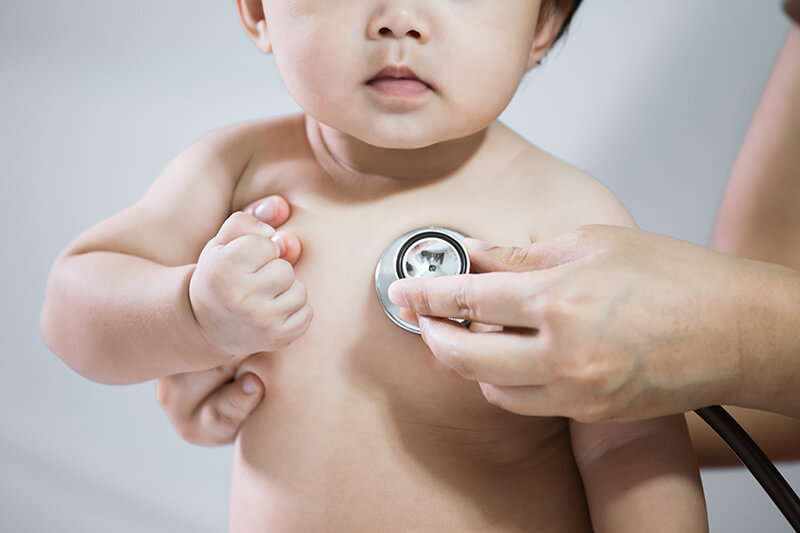 How is it detected?

A fundamental early sign is the size of the baby at birth, as they are usually somewhat smaller than the average. As we will see later, the weight may be higher in some cases due to the accompaniment of lymphatic dysplasia (Ballesta-Martínez, 2010).

First, those affected by this syndrome must undergo a thorough evaluation to determine the existence and / or aspects of the disease. A detailed neurological, physical and genetic examination is essential. The following tests are advised:

– Careful family history: exploring if there were other previous cases of congenital heart disease, short stature, unusual facial features or mental retardation in parents or siblings of the affected.

– Evaluation of the level of development: identify if there are delays. It is useful to pass a test that examines the Intellectual Quotient (IQ).

– Cardiac evaluation with electrocardiography and echocardiography: it is important to consult a cardiologist if the existence of this syndrome is suspected.

– Magnetic Resonance of the brain and cervical if there are neurological symptoms.

– One way to confirm the diagnosis can be by performing a DNA test of the known causative genes.

It should be noted that should not be confused with: Costello syndrome , Turner syndrome, LEOPARD, fetal alcohol syndrome, Williams syndrome or stunting (McGovern, 2015).

– In the prenatal stage, the usual thing is that there are no complications. However, in some more severe cases polyhydramnios may appear (lack of absorption by the fetus of amniotic fluid, remaining too much of it); fetal edema, cystic hygroma (tumor that is born in the head or neck) or pulmonary valvular dysplasia.

– Small increase in the risk of developing cancer, since there are mutations in the RAS gene and in PTPN11 that are associated with both Noonan syndrome and the appearance of certain types of cancer.

The first cause of mortality of this disease depends on the existence and type of congenital vascular diseases.

– It can be associated with low self-esteem or depression (Ballesta-Martínez, 2010).

The treatment of Noonan Syndrome will depend on the symptoms that appear and their severity. The intervention is focused mainly on:

– Treatment of the heart: it is important that the cardiac function be examined periodically. Normally effective drugs are used to alleviate heart problems. If the involvement involves the valves of the heart, surgery may be appropriate.

– Treatment for growth retardation or psych0m0tor problems: in many cases, the levels of growth hormone are below normal, which is why it has been shown that somatropin growth hormone therapy is effective ( Norditropin).

Romano at al. (1996) studied the response of growth hormone in children with this syndrome for about 4 years, noting that there is a significant improvement in height, even half of the participants in adulthood exceed the expected height.

At first it was thought that it improved only in cases of patients without a mutation in PTPN11, but the evidence shows that its long-term use is beneficial in all patients.

– Adequate food: this syndrome often causes problems for the individual in the diet. In the newborn, it may be necessary to implant a nasogastric tube or gastrostomy.

– Treat learning difficulties: with personalized educational programs adapted to the child. If detected from a very young age, it is essential to stimulate it by establishing an enriched environment for it.

– Eye surgery: it is important to have exams at least every two years, since it is common to have vision problems in this condition. In some cases, such as cataracts, surgery may be needed.

– Treat abnormal bleeding: to do this, you should avoid acetylsalicylic acid (aspirin) and products that contain it. Depending on the conditions of each person, the doctor may prescribe medications to regulate blood clotting.

– Improve lymphatic problems: although the symptom is not so usual, it is necessary to take it into account since, having different causes in each affected, it can be complicated to establish a correct treatment.

In the case where fluid accumulates around the lungs and heart, it may be necessary to insert a tube into the chest to drain the fluid. If the problem persists, surgery should be used.

– To solve alterations in the genital and urinary tract: if the problem is about testes that have not descended, surgery will probably be advised. It is recommended to make this option before the child starts school.

If it is a urinary tract infection, the doctor will prescribe the necessary antibiotics. In contrast, if we talk about testicular malfunction, testosterone replacement can be used.

As this disease is genetic, prevention is focused on this aspect. There are cases in which mutations occur for the first time (de novo cases), however, they cover less than 1% and it is not yet known exactly what factors trigger it.

The affected patient will have a 50% risk in each pregnancy to transmit this disorder to their offspring, so the person should know this information when considering raising a family. If the molecular defect has been detected, a prenatal genetic study can be performed in future pregnancies.

The essential thing is to detect the symptoms as soon as possible, especially if there is already a family history of this syndrome.