The obsessional neurosis is a term that defines a mental disorder associated with nervous tension and mental disorders. It is about a psychological disorder postulated from psycho@nalysis by Sigmund Freud.

The Austrian neurologist defined this disorder as a psychic alteration in which the subject acquires a mental state of constant concern with thoughts in which he is not interested.

The cognitions suffered by an individual with obsessive neurosis have a most frightening content, pushing him to commit unwanted behaviors and behaviors.

The obsessive neurosis deals with one of the most complex psychic alterations to examine and treat. Mainly because the symptoms of the alteration are difficult to detect.

In general, it can be said that people with obsessive neurosis are perfectionist and meticulous individuals who are dominated by their thoughts, which often lead them to perform repetitive and compulsive behaviors to avoid their discomfort.

Although at present, this diagnosis is no longer used in mental health practice. Obsessive neurosis is one of the most relevant psychopathological constructs in the history of psychology and psychiatry.

The objective of this study is to provide a coherent definition of this complex alteration, as well as to review its characteristics, symptoms and causes.

We will also postulate the treatments to be carried out for a correct intervention.

The first difficulty posed by this mental disorder lies in the establishment of its own defining aspects.

In fact, the obsessional neurosis is nowadays a complex concept to define, since it raises certain doubts in the delimitation of its main aspects. In this sense, in the literature you can find multiple concepts about this term.

First, Henri Ey defines obsessional neurosis as the compulsive nature of feelings, ideas or behaviors, which are imposed on the person and produce an inextinguishable struggle.

From this first definition, the most classic characteristics of obsessions derive: incoercibility, automatism, struggle and disease awareness.

However, at present these definitions have been notably in disuse. In fact, in the diagnostic manual of mental disorders (DSM-IV) there are remarkably different specifications of obsessive neurosis.

First, according to current diagnostic manuals, obsessive neurosis is not considered as an independent entity. But it includes the alteration within the pathologies diagnosed as anxiety disorders.

Likewise, in current diagnoses, the term of obsessive neurosis has also been modified, which is no longer known as obsessional neurosis, but rather as obsessive-compulsive disorder.

In this disorder there are obsessions and compulsions that the person who suffers them interprets them as excessive and irrational. These symptoms generate clinically significant discomfort and lead, in most cases, to the performance of compulsive behaviors.

Thus, there are notable differences between the disease initially cataloged by psycho@nalysis as obsessive neurosis and the current pathology diagnosed under the nomenclature of obsessive-compulsive disorder.

The obsessive neurosis is characterized by a series of attributes and manifestations that are related to the cognitive alterations that the subject presents.

In other words, obsessive neurosis is defined by a series of thoughts that appear in the person. As its name suggests, these thoughts are characterized mainly by being obsessive.

In more detail, the elements that define the alteration known as obsessional neurosis are:

A high emergence of obsessive phenomena appears in the subject’s mind. These can be of different types such as obsessions of cleanliness, infinity, guilt, verification, etc.

These cognitions refer to an idea, representation or specific situation. And they become a high concern for the subject.

The person who suffers this type of obsessive cognitions develops a series of means of defense against his own obsession.

These mechanisms are characterized by being also obsessive. Likewise, they do not refer to unconscious thought processes, but the subject develops them in a conscious way and with the aim of diminishing the discomfort of obsessive thoughts.

The most common defense mechanisms are characterized by obsessive behavior. For example, an individual with cleaning obsessions will develop a series of cleaning behaviors to mitigate the psychological alteration that obsession produces.

Presence of cognitive and affective alterations

Obsessive neurosis is not limited to the appearance of obsessive thoughts and behaviors related to obsession. This alteration usually also presents a series of emotional disorders.

The apathy, the perplexity, the feeling of unreality or strangeness are common elements among subjects with obsessive neurosis. 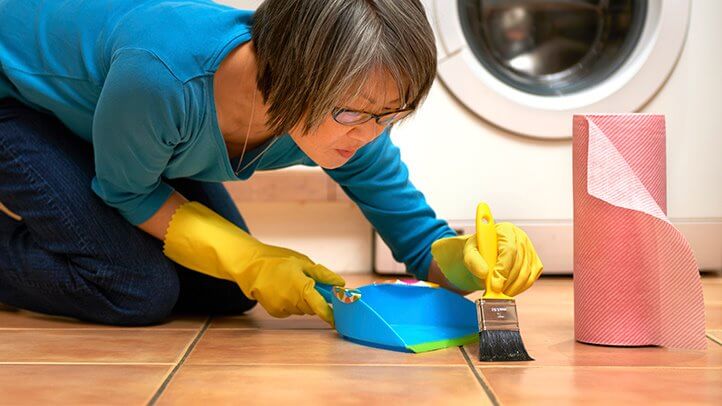 Obsessive neurosis is a disorder that has its origin in psycho@nalysis and dynamic currents.

In fact, other types of schools of psychology, such as cognitive behavioral current or humanistic psychology, do not determine the existence of obsessional neurosis.

Instead, they use the diagnosis of obsessive-compulsive disorder, which has certain differences with obsessive neurosis.

In this sense, the obsessive neurosis presents in its own definition and characterization, a series of attributes related to the psycho@nalysis of the alteration. The main ones, as specified by Henri Ey are:

According to the schools and the psycho@nalytic authors, the force of the unconscious is what constitutes the dynamism of the compulsive thought that bothers. This works on the subject and motivates the appearance of mental and behavioral mechanisms to combat the discomfort of obsession.

In this sense, according to the psycho@nalysis currents, the obsessions represented in the obsessive neurosis acquire a symbolic character. The demands of the instinctual and libidinal system of the individual provoke a series of obsessions in their thinking.

As regards the clinical picture of the disorder, a series of symptoms that people with obsessive neurosis experience and that define psychopathology are postulated.

These manifestations are also specified from psycho@nalytic theories, so they bear similarities with the previously mentioned characteristics. The main symptoms of obsessive neurosis are:

Obsessive neurosis is a psychopathology studied, investigated, diagnosed and classified from psychonalitic theories.

At present, both psycho@nalysis and dynamic currents have lost weight and prominence in the field of mental health. Being these relieved in large part by the cognitive behavioral current.

Thus, today, in the psychopathology diagnosis manuals, the disorder of obsessive neurosis is not found. Instead, the equivalent disorder postulated by the new streams of psychology is specified.

This new disorder is known as obsessive-compulsive disorder. And in spite of keeping close similarities with the alteration initially postulated as obsessional neurosis, it also presents differences both in its symptomatology and in its diagnosis.

The main characteristics of obsessive-compulsive disorder are:

A) Presence of obsessions, compulsions or both:

B) Obsessions or compulsions are time-consuming (eg, they take more than an hour a day) or cause clinically significant distress or impairment in social, occupational or other important areas of functioning.

C) Obsessive-compulsive symptoms can not be attributed to the physiological effects of a substance (eg, a drug, a medication) or to another medical condition.

D) The alteration is not better explained by the symptoms of another mental disorder.

Research on obsessive neurosis has shown that there is no single cause for this psychopathology. In fact, nowadays it has been concluded that there is a combination of factors that combine to cause the development of the disorder.

In general, they can be classified into three main types: genetic factors, physical factors and environmental factors.

As with many other mental illnesses, it is postulated that the obsessive neurosis has a remarkable genetic component in its development.

The suffering of this psychopathology is usually common in some families. Likewise, people who have a first degree relative with neurosis have a higher risk of developing the disorder.

Additionally, if there is a family history of another type of anxiety disorder, the person is also more susceptible to obsessive neurosis.

Recent research has shown how the symptomatology of obsessive neurosis correlates with a series of chemical imbalances in the brain.

In this sense, specific alterations in the brain functioning of individuals can lead to the development of the disease.

The first neurochemical hypothesis lies in the dysfunction of the orbito-fronto-caudate circuit as the final common path of the manifestations of the obsessive neurosis.

Likewise, abnormalities in the grooved subterritories and neurochemical aspects such as the facilitation of serotonergic transmission at the level of the orbito-frontal cortex are factors that are also positively related to the development of obsessive neurosis.

Finally, there are certain environmental factors that can motivate and precipitate the appearance of obsessive neurosis. People who have lived life experiences that they can not control are at greater risk of developing the disease.

For example, experiencing a trauma, being a victim of abuse or abandonment, growing up in a dysfunctional home or being exposed to high levels of chronic stress are factors that can contribute to the development of the pathology.

Currently there are two main interventions to address the typical symptomatology of obsessive neurosis. These are pharmacological treatment and psychotherapy.

With regard to medication, the most effective drugs are tricyclic antidepressants and selective inhibitors of serotonin reuptake, the latter being more widely used.

These interventions allow to improve the clinical picture but in a habitual way they are insufficient to minimize the symptomatology of the disorder.

In this sense, the cognitive behavioral treatment is usually the type of psychotherapy that must consistently accompany the pharmacological intervention. The most commonly used techniques are exposure with response prevention and acceptance and commitment therapy.