The optical neuro units (NO) is a condition in which a slight or significant swelling of the optic nerve (Ernene et al., 2016) occurs.

At the clinical level, the functional and structural alteration of this nervous branch is characterized by the presence or development of a deficit of visual acuity and capacity, chromatic capacity, afferent pupillary alteration and, in some cases, accompanied by edema, atrophy or pallor of the nerve  (Buompadre, 2013).

In addition, the clinical course of optic neuritis is usually very variable, from sudden / progressive to unilateral / bilateral. In addition, at the aetiological level,  optic neuritis can be caused by demyelinating, vascular, toxic, traumatic factors, among others (Bidot, Vignal-Clemont, 2013).

In the case of the diagnosis of this type of pathologies, the physical, ophthalmological and neurological examination is essential, complemented by various  tests such as magnetic resonance, campimetry or evoked potentials (Gutiérrez-Ortiz and Teus Guezala, 2010).

The treatment of optic neuritis usually focuses on the control or elimination of the identified etiological cause and, on the other hand, on the reduction and  severity of the episodes or symptomatological attacks, generally through the administration of corticoid and immunomodulatory drugs (Buompadre,  2013). 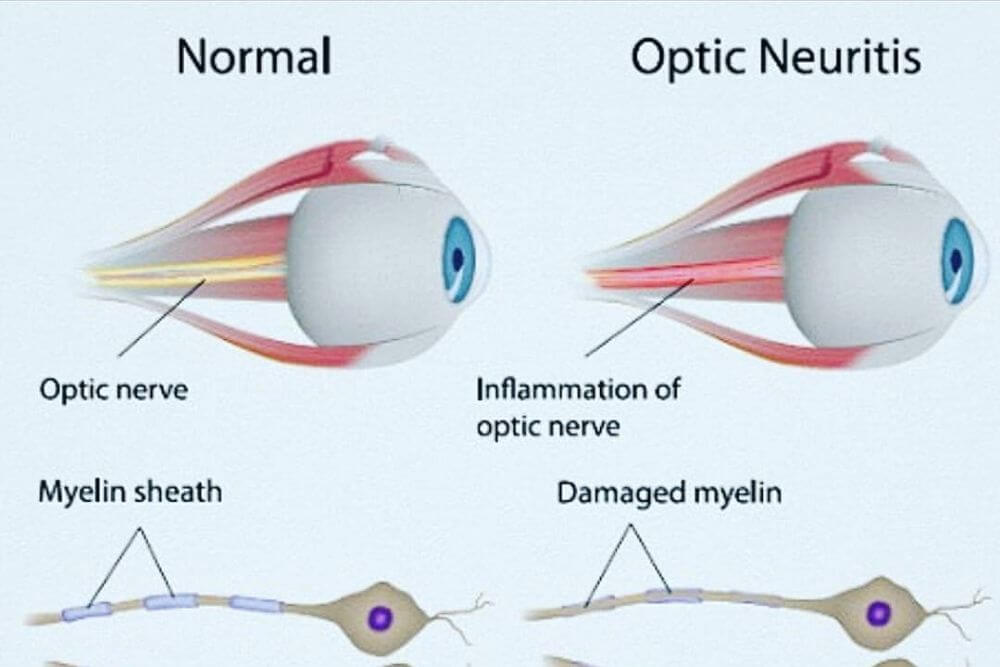 Optic neuritis is the medical term that is usually used to refer to the presence of inflammation of the optic nerve (Mayo Clinic, 2014).

The optic nerve, also called cranial nerve II, is the nerve branch responsible for the transmission of visual information, that is, the stimuli that are generated in the retina and are transferred to the occipital area of ​​the cerebral cortex for processing (Buompadre, 2013).

Thus, the function of the cranial nerve II is fundamentally sensory, encompassing the peripheral receivers of the retina, the central pathways and the cortical centers  (Sánchez Méndez, 2016).

In this way, when there is temporary involvement or permanent damage to the optic nerve, a wide variety of ophthalmological symptoms may appear  (Gutierrez-Ortíz and Teus Guezala, 2010).

The pathologies and medical events that most often affect the optic nerve are glaucomas (alteration of intraocular pressure) and inflammatory, sympathetic or inflammatory, hereditary and traumatic pathologies  (Gutierrez-Ortíz and Teus Guezala, 2010).

Specifically, optic neuritis can cause a broad pattern of visual loss, localized pain and other neuro-ocular symptoms  (Mayo Clinic, 2014).

Although optic neuritis is a pathology that is usually associated with the condition of multiple sclerosis, usually constituting one of its initial symptoms, in other cases, it is an isolated medical event that usually remits after the administration of early and efficient treatment (Mayo Clinic, 2014).

Although there are few epidemiological studies on the global prevalence of optic neuritis, some studies conducted in Sweden and  Denmark indicate that it ranges from 4 to 5 cases of new diagnosis, per 100,000 individuals in the general population (Ernene et al. al., 2016).

Specifically, there is a peak frequency between 20 and 40 years of age. In addition, within these, women usually suffer from optic neuritis in  a higher proportion than men, with a ratio of 3: 1 (Mayo Clinic, 2014). In addition, optic neuritis tends to affect Caucasian individuals more frequently  (Ernene et al., 2016).

The most common diagnostic situation is the following: young patient between 20 and 45 years old, with a first acute event of signs and symptoms related to  nerve ophthalmological involvement (Ernene et al., 2016).

However, some more atypical cases can also be observed during childhood or at advanced ages, during old age (Ernene et al., 2016).

Most common signs and symptoms

Depending on the etiological cause and the individual characteristics of the affected person, the symptoms produced by optic neuritis can vary  significantly, however, the most common include (Buompadre, 2013; Krause, 2015; Mayo Clinic, 2014; Méndez, 2016):

a) Episodes of Acute Pain

Many of the people who suffer from optic neuritis report suffering from episodes of localized pain in the eye areas, especially  behind or around the eyes, periocular pain.

In addition, the sensations of discomfort and pain are usually aggravated or accentuated by the movement of the eyes. In many cases, it can be accompanied by the  perception of light flashes (photopsias), black dots, and even flashing or flashing lights.

The loss of visual acuity is one of the early and cardinal signs of optic neuritis. Generally, it usually appears on a continuum that varies  from blurred vision to the total absence of light perception.

Normally, these types of symptoms usually present unilaterally, that is, they affect only one eye, although in approximately 40% of cases  , children’s optic neuritis presents with a bilateral fall in visual acuity, simultaneously or consecutively.

In addition, the progressive loss of acuity is usually accompanied by an alteration in the perception of colors (dyschromatopsia) and a significant reduction  of the visual field. In many of the affected people, this type of symptoms begins with an abnormal or less strange perception of the colors.

Normally, this loss of vision is usually temporary, restricted to the condition of an exacerbation or symptomatic outbreak, although the duration of the  episode is variable, usually have to resolve in a period of hours to days. However, in other cases the loss of vision, partial or total,  is permanent.

On the other hand, we must bear in mind that the loss of efficient and clear vision, in many cases, can be aggravated by the performance of  intense physical activity or by the presence of high temperatures, whether they are corporal (Uhtholff phenomenon) and / or environmental

The pupil is an ocular structure that is located in the central area of ​​the iris, usually has a variable diameter depending on physical stimuli  (Light/dark) or nervous (drugs /fear/surprise, etc.).

The essential function is to control the amount of light that accesses through the ocular structure for the correct visual perception, that is to say, before the  intense illumination in one or both eyes, a pupil constriction normally takes place.

However, in the pathologies that affect this structure, it may seem that there is a defect in the pupillary response to light stimuli.

Thus, in the case of optic neuritis, there is an alteration or afferent transmission of the visual information of the optic nerve so, when  an intense light source alternates between both eyes, in an approximate interval of 4 seconds, the pupil affected may respond in the form of  dilatation.

The optic disc is a blind ocular region, in which all the nerve bundles originating the optic nerve converge. In the case of optic neuritis,  papilla edema is frequent, that is, the presence of inflammation of this area of ​​convergence.

As a result, various symptoms related to the presence of flashes, obscurations, blurred or double vision may appear.

As we have indicated previously, optic neuritis can have a progressive or sudden course, the most usual is the presentation of a group of symptoms in the form of an outbreak or acute episode (Cleveland Clinic, 2015).

Although the symptoms are variable in the different affected individuals, in the case of adults, it is more common to only affect one eye,  while in the child population, optic neuritis usually affects both eyes with more frequency (Cleveland Clinic, 2015).

In addition, the most common is that the crisis tends to resolve in a short period of time. Normally, the symptoms have to disappear in a few days,  approximately one week (Multiple Sclerosis Society, 2016).

However, there are cases in which they become recurrent, causing chronic medical complications, while in others they disappear with  greater speed, resolving in hours (Multiple Sclerosis Society, 2016).

The optic nerve can be affected by a wide variety of factors, inflammatory, infectious, demyelinating, vascular, toxic,  nutritional, hereditary, sympathetic, mechanical and even infiltrative pathologies (Buompadre, 2013).

Apart from this, most of the optical neuritis are the result of the presence of various immunological factors of unknown origin, from  which the organism itself destroys several healthy cells, including the myelin that covers the optic nerve branch (Mayo Clinic, 2014).

Myelin is fundamental for the transmission of information, that is, it allows electrical impulses to be transmitted quickly and efficiently from the  ocular areas to the brain centers are processed (Mayo Clinic, 2014).

When this pathological process appears, the normal process of transmission interrupts affected visual capacity, among other events (Mayo Clinic,  2014).

Specifically, optic neuritis is a very common medical condition in multiple sclerosis. In addition, it has been pointed out that there is a 50% probability  of developing this demyelinating disease after having suffered one or several episodes of optic neuritis (Mayo Clinic, 2014).

In addition, some research has suggested the presence of some genetic factors related to the predisposition and development of optic neuritis  . Specifically, the presence of the haplotype HLA-DR15, DQ6, DW2 has been identified in almost 50% of adult patients diagnosed in addition to  multiple sclerosis (Buompadre, 2013).

The diagnosis of optic neuritis is clinical, that is, the presence and identification of some signs and symptoms, such as afferent pupillary defect,  visual deficit, dyschromatopsia or papilledema, are sufficient to emit the diagnosis (Galdos Iztueta, Noval Martín, Martínez Alday, Pinar  Sueiro, Fonollosa Callduch, 2012).

In the phase of physical and ophthalmological exploration, therefore, it is essential to explore the sensitivity and visual capacity, the fundus, the visual field,  the integrity of the optic nerve, etc.

In addition, some complementary tests should be used (Galdos Iztueta et al., 2012):

– Magnetic Resonance: this type of neuroimaging technique allows to identify the presence of nerve injuries of the demyelinating type, it is especially useful to predict the possible development of multiple sclerosis. Generally, optic neuritis can be observed in oval type lesions, with an amplitude greater than 3 mm and located in periventricular areas.

– Visual evoked potentials: this type of technique allows to study the potentials generated by the nervous system after the stimulation of a peripheral sensory organ. Specifically, they are used to examine the possible involvement of the optical pathways or to detect lesions that have not produced evident clinical symptoms. The most common in optic neuritis is to find an extension of the latency of the P100 wave with preservation of the amplitude and morphology of the wave.

– Optical coherence tomography : with this technique we can study the thickness of the queen and thus measure its internal thickness and the integrity of  the nerve fiber layer.

Is there a treatment?

Due mainly to the demyelinating etiologies of optic neuritis, there is no specific cure for this pathology.

Normally, neuritis crises usually subside spontaneously, however, the use of some therapeutic measures is recommended, such as  sterold drugs to control and reduce inflammation of the optic nerve (Mayo Clinic, 2014).

Although sterolds are efficient in resolving symptoms, in many cases they have side effects, such as stomach pathologies, insomnia, mood changes or body weight gain (Mayo Clinic, 2014).

In addition, sterold therapy is also commonly used to reduce the risk of developing MS and accelerate functional recovery of vision  (Mayo Clinic, 2014).

In more severe cases, when other interventions do not show beneficial effects, plasmapheresis can also be used; however, its applications and side effects have not yet been confirmed experimentally (Mayo Clinic, 2014).