The organic psychosis are, together with the functional and without physical cause, the possible classifications of established psychoses. They arise as a result of an injury, intoxication or trauma that causes physical damage to the brain.

Psychosis is a mental disorder that causes the individual who suffers to lose contact with reality and undergo various alterations.

When a psychotic episode takes place, the person loses the ability to elucidate between what is real and what is not, and is convinced that what he hears, sees and feels forms part of objective reality. Likewise, a disintegration of the personality occurs.

What are organic psychoses?

Organic psychosis is a mental illness with a physical origin. It can be caused by a brain disease, such as an embolism , a tumor or an infection, or a more general disease that causes indirect damage to the brain .

Substance abuse like alcohol , drugs and drugs can also cause an organic psychosis, which can disappear if the original disease is treated.

Organic psychoses are characterized by a confusional state in the most transient cases and by a personality that undergoes destructions in chronic cases. The fact that the organic psychosis happens chronically or acutely depends on the original affectation that causes it. Some affections that can cause organic psychosis are:

In organic psychoses, short-term memory impairment and disturbance of sleep patterns are usually present , making the person sleep less or more than normal or at odd hours.

The individual also suffers disorientation about where he is, at what time and who he is. The general activity of the person may increase or decrease, experiencing difficulty concentrating and a depressed and / or anxious mood .

Many people who experience psychosis experience sudden mood swings, which affect their relationship with other people, leading to progressive isolation.

The central symptoms of psychosis are delusions and hallucinations , which we will explain below.

A delusion is a false belief or impression that is firmly held by the person despite being objectively contradicted by reality. A person experiencing paranoid delirium , for example, may think he is being persecuted or that there is a government plot to do him harm.

Someone with a delirium of grandeur or megalomaniac may think that he is a great famous painter, known worldwide, and act as such. Delusions are idiosyncratic, proper to the person; Are incomprehensible to the rest of the people because it is only related to the experiences of those who suffer them.

A hallucination is an alteration of perception. The person perceives an object or an event without even a stimulus, which means hearing, seeing, smelling or feeling something that is not present.

You can hear voices in the third person that talk to each other, comment on the activity of the person or leave parts of your body.

Hallucinations most often arise under stressful situations, in perceived or threatening environments, when watching television, when there are emotional states such as sadness or anxiety or when remembering events full of feelings of guilt or anger.

These experiences can be terrifying. Sometimes they frighten the person who suffers them so much that he makes himself or herself or the people around him or her at that moment. The duration of this condition can range from hours to weeks, in which the person can be difficult to control.

The situation can threaten the life of the individual who suffers from organic psychosis and the people around them. If the person shows signs of aggression or violence, he should be admitted to a hospital as soon as possible.

If there is suspicion that a person can suffer an organic psychosis, to begin with you have to @nalyze your medical history. It is possible that the individual has a history of disturbances of thought, emotions or behavior, as well as their level of consciousness.

The medical history can also provide information about the physical alteration that has caused the organic psychosis (for example, a traffic accident in which there was a traumatic brain injury ). Observation of spatial, temporal, and relative orientation, behavior, speech content, and the way of dressing provide essential keys to diagnosing this disease.

A physical examination should also be performed. This test may reveal decreased levels of consciousness, stupor, agitation, restlessness or neurological abnormalities such as tremors and other abnormal movement patterns. These symptoms can determine the severity of the condition and begin to guide a treatment.

Finally, different types of tests can be done to investigate the origins and causes of the findings of other observations: blood tests, drug tests, a computerized tomography of the brain , an MRI , , Electroencephalograms and lumbar punctures, if necessary. 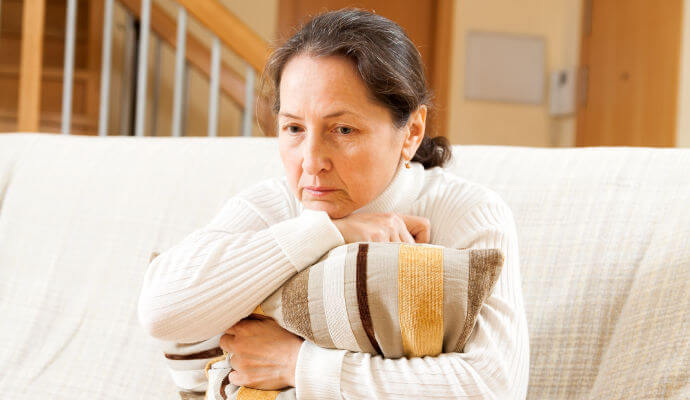 Once the diagnosis of organic psychosis has been obtained and the causes of it have been established, the treatment is aimed at maintaining the safety of the individual and the people around him.

This treatment may involve antipsychotic drugs , antidepressants and anxiety , as well as hospitalization for a while. Observation and follow-up testing should continue to be undertaken in case the treatment direction needs to be changed or improved.

When dementia (involving impaired thinking and memory) is prominent, treatment with cholinergic agonist drugs should be considered. If there are angry outbursts or violent outbursts, these can be controlled with beta-lipophilic blockers.

The services of skilled and professional nurses who visit the patient can be helpful in keeping the individual at home. Counseling can help the family deal with problems related to keeping the person at home as long as possible.

When the family can not be taken care of by the individual, care in a substitute home helps. The environment should include familiar people and objects, lights at night and a simple schedule.

In some cases, as we have seen, the person experiencing a psychosis may be agitated, involving the risk of hurting themselves or those around them.

In these cases, it may be necessary to calm them immediately and effectively by rapid reassurance. A doctor or a qualified person administers an injection or a liquid medicine to the patient to relax it quickly. If the person is very upset, it may even be necessary to use sedatives.

Treatment of psychosis involves a combination of drugs and therapy. The symptoms of psychosis can be controlled with antipsychotic medications, as we have seen, which reduce hallucinations and delusions and help the patient to think more clearly.

The type of drug prescribed will depend on the symptoms observed in the patient. In many cases, the patient needs to take antipsychotics only for a short period of time to keep their symptoms under control; Then it will be continued only with therapy, which is just as important as drugs to prevent relapse. People with schizophrenia , however, should take drugs throughout their lives.

An example of therapy for organic psychosis (and for the rest of psychosis) is cognitive behavioral therapy . This type of therapy involves visiting a mental health specialist on a regular basis with the aim of changing thinking and maladaptive behaviors.

This approach has proven to be effective in helping people to make permanent changes in thinking patterns and to adequately manage their mental disorders. It is often very useful to remove symptoms that are not completely controlled by the drugs.

The course and results of organic psychosis are extremely variable. There may be lucid intervals between the alterations of reality, in which the person is oriented, knows who he is and where he is and recognizes as real the objects that really are.

The course of the disease depends, among other factors, on the etiology of the factor that has caused organic psychosis.

If the cause is transient, such as alcohol intoxication, drug overdose or withdrawal, it is quite likely that the disorder will disappear as soon as the effects of the substances pass. If organic psychosis is caused by a progressive deteriorating condition such as Alzheimer’s disease , the individual may never recover.

Some auditory hallucinations include orders to hurt others; In these cases, the individual may conflict with the law. In addition, during confusional states in which there is a loss of spatial or temporal orientation, the person may be lost.

It is quite difficult for a person with organic psychosis to keep his job, as the described symptoms make it difficult to carry out almost any job. Likewise, comorbid symptoms, such as anxiety and depression , prevent these people from carrying out their daily activities in a normal way, such as maintaining hygienic and nutritional measures.

Continued efforts should be made to clarify the disease and its origins, as a specific diagnosis helps to predict the prognosis and outcome of the disease and to plan appropriate treatment to improve or reverse psychosis.