The Patau syndrome  is a congenital disease of genetic origin, due to the presence of trisomy on chromosome 13 (Rebate Molina, Uriel Ramos, and sources, 2010).

Specifically, Patau syndrome is the third most frequent autosomal trisomy, after Down syndrome and Edwards syndrome (Fogu et al.,  2008).

The diagnosis is usually made during pregnancy in most cases, since clinical findings can be detected in routine ultrasounds  (Ramos Fuentes, 2016).

As for treatment, there is currently no cure for Patau syndrome, the survival of those affected usually does not exceed one year of life. The  most common causes of death are cardiorespiratory complications (Ramos Fuentes, 2016).

Patau syndrome, also known as trisomy 13, is a medical pathology of genetic origin that is associated with severe intellectual disability as  well as multiple physical disorders (Genetics Home Reference, 2016).

This syndrome was initially identified in 1960, as a cytogenetic syndrome, that is, a genetic disorder associated with a chromosomal anomaly  (Best, 2015).

Chromosomes make up the genetic material of the cells that make up our body. Specifically, chromosomes are constituted by deoxyribonucleic acid, also known by its acronym DNA, also has a composition characterized by the presence of different protein substances  .

These chromosomes are usually organized structurally in pairs. In the case of humans, we present 23 pairs of chromosomes, having in total  46 of these.

In the case of Patau syndrome, the genetic anomaly affects chromosome 13 specifically. Affected people have a trisomy of  chromosome 13, that is, they have three copies of it.

At a more specific level, each ovum and each sperm contain 23 chromosomes each, with the genetic material of the maternal and paternal parent  (Stanford Children’s Health, 2016).

At the time of fertilization, the union of both cells results in the creation of 23 chromosomal pairs, or what is the same, the presence of 46 chromosomes in total (Stanford Children’s Health, 2016).

However, there are occasions in which an error or an event altered during the union, leads to the presence of genetic anomalies, such as the presence  of an extra chromosome in one of the pairs (Stanford Children’s Health, 2016).

In this way, this altered process will cause a succession of neurobiological events during fetal development, which will alter the normal or expected gene expression  , giving rise to the presence of organic involvement in various systems.

Patau syndrome or trisomy 13 is considered a rare or rare disease. Different investigations estimate that this pathology presents  an approximate frequency of 1 case per 5,000-12,000 newborns (National Organization for Rare Disorders, 2007).

Despite this, in most of the cases the gestation of those affected by the Patau syndrome does not usually come to term, so the frequency  can increase significantly (National Organization for Rare Disorders, 2007).

Thus, it has been observed that the annual rate of spontaneous abortions in this pathology is high, representing approximately 1% of the total of these (Ramos  Fuentes, 2016).

Regarding the distribution of Patau syndrome by sex, it has been observed that this pathology affects women more frequently than men  (Genetics Home Reference, 2016). 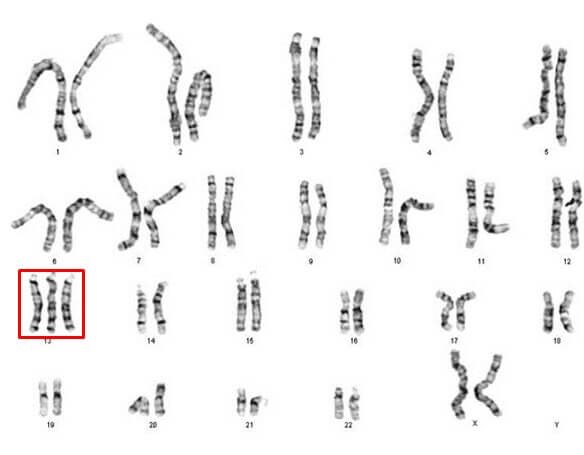 Clinically, Patau syndrome can affect very heterogeneously in the body and between different cases, so it is difficult to establish  what are the cardinal signs and symptoms of this disease.

However, different clinical reports such as that of Ribate molina, Puisac Uriel and Ramos Fuentes (2010), highlight which are the most frequent clinical findings  in those affected by Patau syndrome or trisomy 13:

The presence of a generalized growth retardation is one of the most frequent clinical findings. Specifically, slow or delayed growth in the prenatal and postnatal stages can be observed  in approximately 87% of cases of Patau syndrome.

Alterations and malformations in the central nervous system (CNS)

In the case of the nervous system, there are several clinical findings that can be observed: hypotonia / hypertonia, apnea crisis, holoprosencephaly,  microcephaly, psych0m0tor retardation or severe intellectual disability.

At the facial and cranial level, there are also several clinical signs and symptoms that can be observed:

Musculoskeletal abnormalities and malformations can affect various areas, the most common being the neck and extremities.

Alterations of the cardiovascular system

The anomalies related to the cardiovascular system, constitute the most serious medical condition in the Patau syndrome, since it seriously threatens the  survival of those affected.

Alterations of the genitourinary system

The manifestations of the genitourinary system are usually related to the presence of cryptorchidism in males, polycystic kidney, bicornuate uterus  in women and hydronephrosis.

As we have pointed out above, Patau syndrome is associated with the presence of genetic abnormalities on chromosome 13.

Most of the cases are due to the presence of three complete copies of chromosome 13, so that the extra genetic material alters the normal development  and, therefore, giving rise to the characteristic clinical course of the Patau syndrome (Genetics Home Reference, 2016).

However, there are also cases of Patau syndrome due to duplications of parts of chromosome 13. It is possible that some affected people  have all intact copies of this and an extra adhered to another different chromosome (Genetics Home Reference, 2016).

In addition, cases have also been reported in which individuals only have this type of genetic alteration in some cells of the body. In this  case, the pathology acquires the name of trisomy 13 in mosaic, and therefore the presentation of the signs and symptoms will depend on the type and number of  cells affected (Genetics Home Reference, 2016).

People affected with Patau syndrome present a set of clinical manifestations that are present from the moment of birth.

Based on the observation of the signs and symptoms, it is possible to make a clinical diagnosis. However, when there is suspicion, it is essential to  perform other complementary tests to confirm the presence of Patau syndrome.

In these cases, the tests of choice are genetic tests of the karyotype, these are able to give us information about the presence / absence of  an extra copy of chromosome 13.

In other cases, it is also possible to perform the diagnosis in the prenatal stage, performing routine ultrasounds may show alarm indicators  , so, in general, genetic @nalyzes are requested to confirm their presence.

The most common tests in the prenatal stage are fetal ultrasound, amniocentesis and chorionic villus sampling (National Organization for  Rare Disorders, 2007).

In addition, once the definitive diagnosis of Patau syndrome has been made, whether in the prenatal or postnatal phase, it is essential to carry out a  continuous medical follow-up in order to detect early the possible medical complications that put at risk the survival of the affected person  (National Organization for Rare Disorders, 2007).

At present, there is no specific or curative treatment for Patau syndrome, therefore, therapeutic interventions will be directed  towards the treatment of medical complications.

Due to the serious multisystemic affectation, people affected by the Patau syndrome will require medical assistance from the moment of  birth (Ramos Fuentes, 2016.

On the other hand, cardiac and respiratory alterations are the main causes of death, therefore, it is essential to  follow-up and detailed medical treatment of both conditions (Ramos Fuentes, 2016).

In addition to the pharmacological intervention for different signs and symptoms, it is also possible to use surgical procedures to correct  some malformations and musculoskeletal abnormalities.

In summary, the treatment of Patau syndrome or trisomy 13 will be specific depending on each case and the associated clinical course. Generally, the  intervention usually requires the coordinated work of different specialists: pediatricians, cardiologists, neurologists, etc. (National Organization for Rare  Disorders, 2007).