The people with depression are characterized by feeling a deep sadness, guilt, lack of motivation, anxiety, dependence, indecision, memory loss, sleep problems, changes in appetite and lack of sexual desire.

This does not mean that all the people who suffer it have the same behaviors, not even that in all cases it manifests in the same way. But they do tend to present common symptoms that can help us identify if someone in our environment or ourselves are suffering from possible depression.

Until recently, there was not enough empathy or understanding with who was suffering from this serious disease. Fortunately, there is a growing awareness of this problem and the delicate state of the people who suffer from it.

It is important to remember that, fortunately, research in this field is very extensive and that nowadays there are very consolidated treatments with which to overcome this disease. 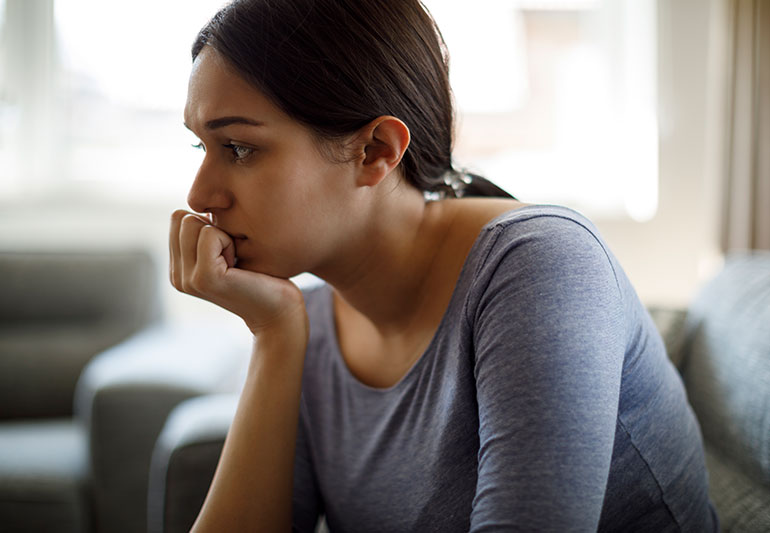 Different techniques and orientations are used so that each person can choose the method that best suits their problem. In any case, the first step to solve it is to recognize it and then contact a mental health professional to remedy it.

Main characteristics of people with depression

Next, we will divide the symptoms according to the area that is affected. In this way we can classify them into affective, motivational, cognitive, behavioral or behavioral and physical or physiological symptoms.

This is usually the main symptom of people suffering from depression. It manifests in different ways and with different intensity depending on the subject. It is very common for the person who suffers it not to give permission to feel sadness properly and this contributes to generate greater discomfort.

The person does not usually give permission to recognize that he can feel that sadness, especially when he has gone through some serious event or experience, such as the loss of a loved one. In most cases recognizing the problem and allowing yourself to feel compassion for yourself helps you feel relief.

On the other hand, it is very common for those who suffer this sadness to say things such as “I can not bear such sadness”, “I will always be very unhappy”, “I feel bad all the time”, etc. These types of thoughts contribute to increasing the feeling of sadness that is seen as feedback, forming a loop. It is necessary to leave at some point of that vicious circle to be able to solve it.

Experiencing periods of uncontrollable crying is another very common symptom in depression. It is possible that the person feels some relief after these episodes but in the long run they tend to increase their sadness even more.

In a very usual way, the person suffering from depression usually has feelings of this typefor some behaviors he has performed and even for thoughts or desires that he has or has had.

The person is not able to identify that the fact of having a wish or thought does not influence the reality and many times they believe that by the fact of thinking it can come to be fulfilled.

It can also happen that you feel guilty  about being depressed. In most cases this guilt comes from the fact that the person feels excessively responsible for their own behavior and even that of others.

It can also happen that the person performs counterproductive behaviors due to this feeling and this in turn leads him to feel even worse. For example, as I feel bad I drink excessively, and when I drink I feel guilty for not being able to control this behavior or solve the problem in another way, thus increasing the feeling of guilt.

Some people who suffer from depression have this kind of feeling. They think that they are weaker, childish or inferior to others because of this disease. Sometimes they even think they are crazy and that others are going to realize this fact. This feeling of shame also generates deep discomfort and often results in the person avoiding social contact.

Contrary to what is commonly believed, depression and anxiety usually go together and when one appears it is common for the other to suffer. The person who suffers it has to learn to identify this discomfort as anxiety and above all internalize that although the symptoms are very annoying, they are not dangerous.

In this way, the patient is prevented from feeling anxiety before experiencing the symptoms of anxiety.

It is very common for the person suffering from depression to have a lack of motivation to perform even the simplest and most frequent tasks, such as getting out of bed or going to work.

The individual knows what he has to do but is unable to do it or thinks he will not get any satisfaction for doing it, therefore it is not worthwhile to carry it out and remains in a state of immobility.

Coupled closely with the above, it is very common for avoidant or flight behaviors to appear in people suffering from depression.

The person believes that he will be unable to perform a task or that he will perform it poorly, so he avoids facing certain situations. This contributes to increasing your discomfort and the belief that you are not able to perform even the simplest task.

The dependence over others is another common symptoms of depression. Although it is positive to ask for help from people in the environment, this type of dependency goes further and often request, or even demand, help for tasks that could easily be done alone.

To receive this help from others, initially makes the person experience some relief to feel loved and cared for by others. But in the long run it can contribute to increasing the patient’s dependence and feeling of uselessness or incapacity.

In some cases, the person experiences periods of anger or anger . They usually appear when the individual begins to recover because anger is usually incompatible with the deep sadness experienced in the early stages of depression. They are also usually periods of short duration and for some specific situation or person.

But, although it is rare, in other cases these periods of acute anger can be experienced in a habitual way and in all stages of depression . If this happens the anger usually goes towards some concrete person and also generate feelings of anger and revenge towards it.

Perception of problems as irresolvable or overwhelming. This type of belief is very common in the person who suffers from depression because he believes that he will never find the solution to his problems or that he will always be just as bad.

The individual usually experiences a sense of blockage that prevents him from seeing solutions or thinking about new ones. This lack of creativity when finding alternatives would not exist without being under the symptoms and effects of depression.

So it is convenient to remember that this blockage will disappear when you experience improvement or end depression.

In this case, the person often stops making decisions because he always foresees a negative consequence as a result. It is also possible that he blames his depression on certain decisions he has made and therefore making new decisions becomes an arduous and complicated task.

On other occasions, the person needs to have absolute certainty that the decision he is going to make is the correct one. In this case it is necessary to remember that there are no absolute certainties and that it is impossible to know what will be the consequences of making a decision before taking it.

It is also possible that the person does not make decisions because of an inappropriate feeling of guilt that prevents him from seeing the realistic consequences of taking one option or another.

On the other hand, in many cases it is even advisable for the person to postpone decision making until they overcome depression or find themselves better. As we have already commented, the individual can be in a situation of blockage that prevents him from generating options or alternatives that would arise from not being depressed.

For this reason, if the decision is not urgent, it is advisable to delay it until the person is able to generate all the possible alternatives and thus make the decision that is considered most appropriate at that time.

In a habitual way, the depressive patient usually attributes his suffering to some deficiency or error that he himself has committed. It is also common for you to receive this same message from your environment in the form of phrases such as “if this is how it is because you want” or “if you would like to be better”.

13- Memory losses and / or difficulty concentrating

These two characteristics usually go together. The person has memory problems because they do not focus on the task, what they are saying or what they have to learn.

Instead of focusing your attention on the moment that is required, you are usually thinking and rambling on about your problems and discomfort. Therefore, when it is necessary to recover this information, it is not found because at the time it was not given sufficient attention.

Inactivity is another of the typical characteristics of the person with depression. The main reasons for this passivity are usually the belief that they will not be able to do it, the lack of motivation or simply arguing that they are too tired to perform it.

We must bear in mind that due to his state, this type of beliefs are strongly rooted, and when he expresses that he does not feel capable of doing so, it is because he really believes that he will not be able to do so.

In this sense, it is usual for the patient to avoid social contact, or if he does so in a submissive manner, submitting to the wishes of others. In most cases, the person does have social skills but does not put them into practice.

Physical and / or physiological symptoms

Another of the symptoms that appear regularly are alterations in sleep. Depending on the people, they can manifest as difficulty to reconcile, nighttime sleep interruptions, insomnia or on the contrary sleep excessively. It is important to remember that when depression subsides, the person will have a normal sleep cycle again.

One of the first symptoms that manifest when suffering from depression is the alteration of the appetite. Depending on the person in some cases these alterations are manifested with a loss of appetite and in others just the opposite.

At first the person does not usually give importance but if you lose weight or gain excessively can be worrisome to the health and self-esteem of the individual.

It is usually another of the symptoms that previously appear in depression. It is believed to be linked to the loss of pleasure that the person experiences in most aspects of their life. As with the other symptoms, it is important to bear in mind that when overcoming depression the loss of sexual interest will disappear.