The podofobia is the irrational fear of feet, including feelings of disgust, rejection and repulsion. The podófobos can feel rejection so much by the feet other people’s as of their own and as much by the neglected ones or with injuries, fungi, etc., as by the esthetic and well-taken care of.

While for many the feet are erogenous parts of the body, and for most are just one part of the body, for the podófobos the human foot is a sign of disgust, fear and rejection. And this is a very limiting fear, because the person can not get rid of their feet and their presence generates a constant phobic anxiety.

This difficulty can lead the person with podophobia to neglect their own feet, for fear or disgust to touch them, which can lead to fungi, infections or other affectations. And, in an extensive way, it reduces the quality of their interpersonal relationships, because for those who do not suffer the condition, it is difficult to understand it.

This phobia is of a generalized type or, what is the same, its presence is constant in the life of the individual, because the phobic stimulus never disappears. The person can avoid it, for example, using stockings even to bathe and not attend public places, such as beaches, so as not to see any foot, but the dreaded object is always present there.

In the next lines the components of podophobia will be explained in detail, namely, its symptoms, causes the most appropriate treatment. This, in order to understand the condition in depth. Additionally, a guide for the differential diagnosis with similar phobias will be offered and its specific course will be explained.

Podophobia, like any other phobia, is characterized by a strong and persistent fear, which is excessive and irrational and which occurs in the presence, image or thoughts associated with human feet. But this is not necessarily the most common way in which this phobia is experienced.

It is more common, however, that the affected person feels a deep rejection, repulsion or disgust to see the feet of any person and in any situation. However, this repulsion has the same qualities of persistence over time, excess of affectation and difficulty or impossibility of eliminating the phobia by means of reason.

It is also required that the person be able to accuse this fear and understand it as excessive and irrational. It is natural that almost any person feels rejection or disgust before ugly, deformed or sick feet; but the rejection of the podophobic occurs even with healthy and clean feet and the repulsion is higher than normal before sick feet.

The person with podophobia may also feel disgusted by the fact that others touch their feet or look at them. Some of the physical signs that can be felt are difficulty breathing, tachycardia, sweating, tremor, nausea, dizziness, among others. In some cases, the person may end up associating death or dying with the feet.

Podophobia can occur with forms of social phobia, while the individual can avoid social situations or go out to the public so as not to expose themselves to the possible shame of someone evaluating their feet in the same way that they do. Thus, social situations could generate high levels of anxiety and even panic attacks.

This phobia is not so common in children, but when the indicators are presented, they are crying, vomiting or vomiting, and high levels of frustration. As in the case of other phobias, so that podophobia can be diagnosed in children under 18, it must have been active in the last six months.

Finally, this table already described on podophobia leads the subject to experience great discomfort, which is clinically significant and reduces the quality of their life, their relationships and their social responsibilities, in addition to the possibility of suffering diseases in the feet for the little care in them.

The literature about phobias as specific as podophobia is minimal, but its causes can be assumed to operate the same as in any other phobia. Some investigations clarify that there are possible identifiers of phobia in genes, but it is not conclusive information. More useful contribute psychological causes.

It is common that podophobia has its origin in readings on diseases of the foot, made his medical judgment, which derive in irrational fears and that grow as the readings advance. It can also be due to suffering or having suffered from some disease in the feet, which deform him, cause pain or alter his skin or smell.

It is less likely, on the other hand, that it could be due to a traumatic event, unless it is a displaced cause that, due to its characteristics, are difficult to associate with the picture. An example of a related traumatic event would be an adult who remembers being continuously kicked by a relative or caregiver.

It would be more common, on the other hand, if the phobia develops through learning or modeling, while in the home or family nucleus there is someone with podophobia or other similar phobia, such as bromidrophobia (fear of body odors), self-dih0m0phobia (fear of smelling bad) or dermatophobia (fear of skin diseases).

Another cause would imply that the person previously has social phobia, and part or all of the social anxiety is derived from rejection by one’s feet, as an excuse to avoid leaving the house and controlling the greater fear. This could be verified by performing a biographical @nalysis of the patient and his relationship with his fears.

However, we must remember that in most cases the person will not be able to remember a single event or situation that explains his phobia. In his life experience, the phobia seems to have been always or its origin is uncertain and the person can not specify it. It is ideal to find a cause, but it is not mandatory for treatment. 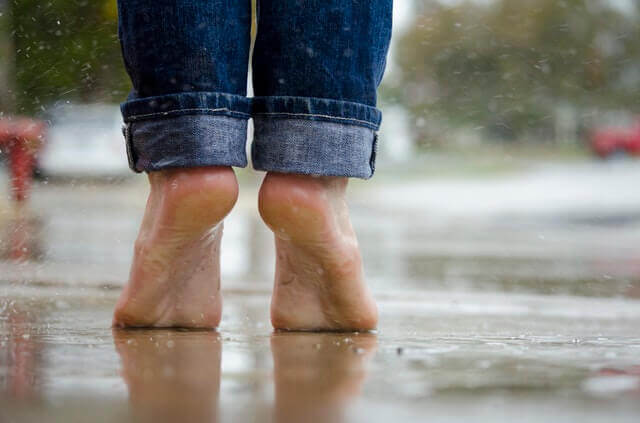 There is no precise information about the course of this phobia, but it is known that it is less common to start during childhood. Because of the atypical nature of starting in childhood, it would be understood that his prognosis was less encouraging and would require therapy to be resolved. Otherwise, it could extend into adulthood.

It is more likely that podophobia begins in adolescence or early adulthood. This may be related to the sexual awakening of this vital period, while the foot is a part of the body that is exposed to the public but has an intimate character, often associated with the sexual.

As in most body phobias, it mostly affects women, although its course is identical in both genders. When it begins in adolescence, its evolution can be positive if corrective measures are applied in a short time. In adulthood, an intervention is less positive, especially the longer it is present.

If the person comes to find a system that allows a certain level of functioning but without facing the phobia, it can be exacerbated in the future. For example, if you get a partner who accepts your phobia and manages to keep shoes at all times without causing fungi or infections.

A brief review will now be made on different types of phobia that bear similarities with podophobia and, as such, can confuse both those who suffer their symptoms and those who have the responsibility to diagnose it. This, although in some cases two or more different phobias can coexist.

The dermatofobia, as already indicated, is the fear of diseases of the skin or even the skin itself. Although, the person with podofobia usually concentrates its fear to the feet in its visible part, that is its skin, and it can fear the diseases of this, the phobia is reduced only to the skin of the foot and no to any other.

Chirophobia is irrational fear of hands. Except that it is not usually disgusted or rejected by the hands, it is almost identical to podophobia, except that instead of fearing the feet, they fear their hands. In these cases, they will also avoid using or washing their hands and keep them covered with gloves or other clothing.

This may be related to sexphobia, which is mainly the irrational fear of sex, penetration, 0rgasm or other forms of sexual contact, but also when seen naked. The person with podophobia can avoid any form of sexual contact even without fear of it, just to avoid showing his feet or seeing others.

Within this same line, is the hafephobia, which is excessive fear of touching other people or being touched. But this fear is usually not associated with a specific part of the body or refers to being touched by someone of the opposite sex. Although the hafephobic may fear touching his foot, he is afraid of being touched elsewhere.

Usually associated with hypochondria, or the belief of having diseases that do not have, and necrofobia, which is the irrational fear of dead things or associated with death (for example, urns). The tanatofóbico also can fear the death of loved ones.

It is clear from the previous list that there are many phobias with similarities to podophobia. And there were still others not mentioned. In general, any body phobia or fear of disease will have a similarity. The important thing is that the patient rigorously describes his symptoms to make a correct distinction of these.

It is necessary to talk about the treatment of podophobia, very similar to other phobias. For example, it is known that anti-anxiety medication can be useful, but it is always recommended to use it after trying psychotherapeutic care or, at least, working with both simultaneously.

Among the extra therapeutic recommendations is that the person returns a routine of his life to receive pedicures, both to ensure the health and aesthetics of their feet, and to get used to exposing them, seeing them and taking care of them. This event could help the subject to gradually rationalize their condition.

It is often recommended, also hypnotherapy, which has a great use in helping to discover the cause or causes of the phobia. In addition, it allows the person to expose themselves to the feared stimulus in a less hostile context, which can help them see it in its correct perspective.

Already within what refers to psychotherapy, systematic desensitization is presented as one of the most effective means to reduce the symptoms of anxiety in a short time. But it is recommended to incorporate a cognitive model as well, to understand the inadequate thoughts that have originated or sustain the phobia.

While one of the characteristics of phobias is that they are irrational, the distortions of thought are easily maintained. Therefore, it is always prudent to get the attention of a professional if you know that you have a phobia and that it is reducing the quality of life or has already begun to affect the routines.