The potomania is  an impulsive desire to drink water all the time and can have very serious consequences. People who suffer from it usually drink between six and ten or  fifteen liters of water per day.

Potomania could also be defined as a disorder in impulse control, characterized by excessive water intake. It occurs frequently  in patients with schizophrenia or other chronic psychiatric illnesses.

But the good news is that this disorder can be cured with proper treatment. To learn more about this condition, continue reading this  interesting article. 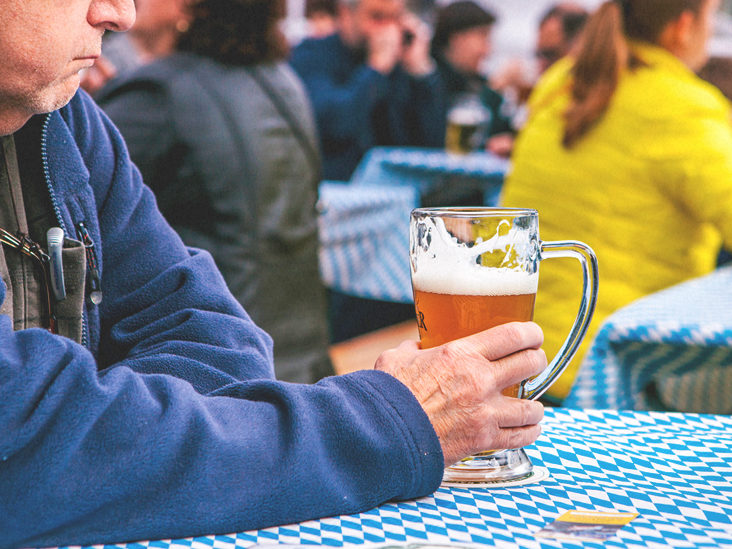 Actually potomania can be caused by several factors, including the following:

When there is no organic cause for this condition and the origin is strictly psychological or psychiatric, the potomania is called psychogenic polydipsia  .

The main symptoms are the compulsive desire to drink water and excessive intake of liquids, which exceeds four liters of water daily.

If a  person is consuming more than six liters per day, you should consult the doctor immediately, even if there are no other symptoms.

In patients with potomania there may also be a great feeling of anxiety, problems sleeping, panic attacks and headaches.

If treatment is not received, potomania can have very serious consequences and can even cause the death of the patient.

When a person drinks too much liquid, the kidneys are not able to eliminate excess in the urine.

Therefore, the water dilutes the blood and lowers the concentrations of sodium, potassium and chlorine, which are very important for the functioning  of the whole organism.

It is estimated that approximately 10% to 20% of patients with potomania have low blood sodium levels.

This alteration in the concentration of ions in blood can cause:

For this reason it is very important that any person who is drinking more than four liters of water daily, consult the doctor immediately.

The treatment of potomania may vary depending on its cause.

If the disorder is caused by diabetes, the treatment of this disease with medication and a proper diet should decrease the patient’s permanent thirst sensation  .

If the potomania is caused by some medication, the doctor could look for alternative drugs.

And in the case of patients with mental disorders, the treatment of psychogenic polydipsia includes the following pillars: restriction  of fluid intake, psychological therapy, drug therapy and correction of hyponatremia (low sodium level), if any.

In most cases of psychogenic polydipsia sodium remains at normal levels, but in 10% or 20% of cases, there may be mild, moderate or severe hyponatremia  .

Symptoms of hyponatremia may go unnoticed, unless the sodium concentration decreases rapidly.

Typically, hyponatremia in patients with potomania is mild or moderate and asymptomatic, especially if there is no other underlying disease that  affects blood sodium levels.

The severe and symptomatic hyponatremia can occur in less than 48 hours without the intake of fluids is much higher than usual, and the consequences  of the decrease in the level of sodium in blood can be harmful, causing cerebral edema, seizures, coma and death.

That is why it is important to correct the patient’s sodium levels, if they were low.

For correction, a hypertonic solution (3% sodium chloride) is usually used, which is applied intravenously. The correction should be  made slowly, because if the sodium level rises too fast, there can also be very negative consequences.

As expected, the first thing to do when someone has potomania is to restrict their fluid intake.

At the beginning of the restriction, the patient should consume between 0.8 and 1.5 liters of water every 24 hours. One way to know if a person has been drinking  too much water during the day is by controlling body weight.

If you drink a lot of water, your weight will increase up to 2.2%.

The problem with fluid restriction is that many patients with potomania are not able to comply with it, precisely because they feel  an uncontrollable desire to drink water.

In extreme cases, it may be necessary to confine the patient in an area that lacks water sources.

Through behavioral therapy, the therapist can apply some tools and techniques to achieve changes in the patient’s behavior  and thus reduce the anxiety he feels if he does not drink water.

For example, the patient is given a 500 ml jug and told he can only fill it six times a day. When you feel like drinking, you can do it in  small sips, or you can try to distract yourself with other things so you do not drink more than you should.

In some cases, the reward system has been used with some success. For example, if the patient fulfills the objective of not  drinking more than a liter of water during the day, they are assigned tokens or points. And if it does not comply, it will be taken away.

As the therapy progresses, the therapist attempts to modify the patient’s thoughts, fears and false beliefs about water intake.

The positive reinforcement of the appropriate behaviors and the tools that the therapist offers to deal with anxiety usually give good results.

Throughout the treatment, the patient is asked to keep a diary in which he notes what happened to him, how he felt and how much water he drank, each time he  needed to drink liquid.

After 12 weeks of treatment, the potomania should be under control.

In cases of psychogenic polydipsia, the atypical anti-psychotics, usually prescribed in patients with schizophrenia, bipolar disorder, major depression  and other mental illnesses, have proved to be quite effective also for potomania.

On the other hand, if the patient has potomania due to a mental disorder such as major depression for example, the urge to drink water can be controlled  spontaneously when the patient receives treatment for their underlying disease.

It is always interesting to know real cases of these conditions that seem strange, but in reality may be more frequent than you think.

In a hospital in India, a 25-year-old woman, divorced and of low socioeconomic status, was taking 12 to 25 liters of water  daily (it is true, although you can not believe it!).

The lady also suffered attacks of panic, anxiety, cries of crying, headaches and sleeping problems, for about 3 years. He also had asthenia, poor concentration and depressed mood.

In his clinical history there was no history of psychiatric illness, or anything flashy, except for an unhappy marriage that had ended some time  ago.

In this case, despite the high water intake, sodium remained at normal levels.

The doctors determined that the woman was suffering from psychogenic polydipsia and also major depression. The symptoms of potomania disappeared after a brief  period of fluid restriction and treatment with benzodiazepines, antidepressants and psychotherapy.

An 18-year-old boy was referred to the psychiatric service of a Spanish hospital due to his behavior disorders, which included episodes of  aggression towards his parents.

In his clinical history there was no history of mental illness, however, in his life the boy had always had problems to relate and  poor performance in school.

After some studies, doctors determined that he had a low IQ and suffered from intermittent explosive disorder, and  prescribed a medication called topiramate, used for the treatment of epilepsy and migraine among other conditions.

With this drug, the symptoms of aggression of the boy subsided in four weeks, but he suddenly began to drink about 5 liters of water  daily. The only possible explanation for this change in behavior was a side effect of the medication.

The doctors decided to remove topiramate and potomania symptoms completely subsided in only 4 days.

Although it is not known exactly how topiramate works, it is known to alter the functioning of sodium channels in neurons. This could cause  elevated levels of sodium in the blood and cause potomania in the patient.

A 41-year-old man, who had been suffering from paranoid schizophrenia since he was 16 and was being treated with haloperidol (antipsychotic medication) in an irregular manner  , was taken to the emergency room of a hospital with seizures one day.

The relatives said that for two years he had taken more than 5 liters of water daily and that two or three days ago he had been sleepy and nauseated . That day they found him lying on the floor, convulsing, and they took him to the hospital.

In this case, the sodium level was very low, only 119 mEq per liter, when the normal level is above 135 mEq per liter. Surely this low  level of sodium was the cause of the seizures, because other possible causes were ruled out.

The sodium level was corrected with intravenous hypertonic solution, and after two days the symptoms of water intoxication had completely subsided.

Also Read: Psychological Pregnancy: Symptoms and How to Detect It

As you can see, potomania can have different causes, but whatever it is, it is a condition that must be treated.

If you know someone who is drinking more than four liters of water every day, or this happens to you, you should immediately consult the doctor, you could  be saving your life or someone very dear.