The reactive depression is caused as a reaction to an external event or circumstance. In other words, it is a depressive state that the person experiences in response to a major stressor, such as a breakup of a partner, death of a relative, divorce, loss of employment…

Due to individual differences, a stressful event can cause one person to react with depression while another does not react. For example, before the death of a relative some people can resume their daily life, while others react with depressive symptoms. Most people who have reactive depression can recover within 6 months through cognitive behavioral therapy.

This type of depression can be serious and needs to be treated if it persists for too long a period of time and the person does not recover. However, most people disappear over time and can return to normal behavior. In other words; the reactive depression is temporary, unlike the major depression that is in the long term.

The clinic of reactive depressions is a little more diffuse than that of endogenous depressions, since these depressive pictures are closely linked to the personality of the person, which is not the case with hereditary depressions.

However, there are certain symptoms that are considered typical of this type of depressions. These are:

In reactive depression there is a clear alteration of mood, which is depressed and with symptoms such as sadness or loss of interest.

In fact, the inability to experience pleasure with most activities that were gratifying to the person prior to the onset of depression was considered the main symptom of this disease.

Likewise, this difficulty in experiencing pleasure causes a notable loss of interest in most things, so that the person with active depression is usually unwilling to do anything.

Likewise, irritability and anxiety may occur in response to mood and inability to function properly and “pull forward.”

The affective symptomatology is linked to certain thoughts, which usually maintain and / or aggravate the problems of the mood.

People with reactive depression often have low self-esteem, a lot of pessimism about their life and future, feelings of guilt , and a thought  marked by the negative aspects of their life.

As we have already mentioned, reactive depression is often closely linked to the personality of the individual and to the adaptation he makes to the various stimuli that are present in his life.

In this way, people with these types of depressions may have a personality that is very negative or very perfectionist.

One of these two types of personality might explain the tendency to overemphasize the negative aspects, to be incapable of adapting them, and to shape a thought centered on pessimism and personal devaluation.

Likewise, reactive depression can cause feelings of hopelessness and difficulty concentrating, thinking and functioning properly.

Likewise, reactive depression usually affects the functioning of the person, both socially, as well as working and personal, and their behavior is usually marked by a clear lack of motivation.

People with reactive depression usually have low energy on a constant basis; they often have a hard time doing any activity and tend to fatigue easily.

Likewise, their behavior is usually marked by social withdrawal, unwillingness to communicate with other people and the absence of leisure activities.

All this makes the activity and productivity of a person with reactive depression significantly decrease, and opt for a passive and inactive lifestyle.

The main difference between endogenous depression and reactive depression is clear, the first one is caused by genetic factors and the second one arises through a poor adaptation of the subject to the different situations or events that he has to live.

However, how can we differentiate one from the other? How can we know if a person suffers from an endogenous depression or a reactive depression?

Being able to differentiate both types of depressions is very important, since although both disorders are similar, they differ a lot in their treatment and evolution. 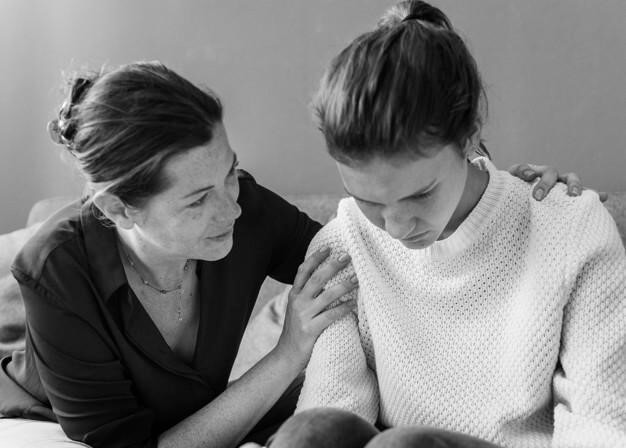 The main characteristics of the reactive depression that differentiate it from the endogenous depression are:

As we have seen, reactive depression can vary in its severity, to the point of not becoming a depression (and being a dysthymic disorder).

Thus, in general this type of depression usually affects less the social functioning of the person, and can preserve a certain functioning, things that do not happen with the endogenous depression.

In endogenous depression, psychotic symptoms such as hallucinations or delusional ideas can occur .

In reactive depression this does not happen and the mood disturbance does not become so high as to produce delusions in the person’s thinking.

In reactive depression there are no somatic and motor symptoms, which are very common in endogenous depression.

Thus, there is no marked loss of weight and appetite, there are usually no changes in movement, and insomnia or excess sleep is rarely present.

Reactive depression usually occurs after a stressful event, which overcomes the person’s ability to adapt.

This does not happen in endogenous depression, which, as we have already mentioned, arises through genetic causes, without the need for environmental circumstances.

In the same way, the person’s way of being and his personality pattern dictate the bad adaptation to the environment that causes the depressive picture. In endogenous depression, personality has nothing to do with depressive symptoms.

People with endogenous depression usually have a personality characterized by generalized anxiety, emotional instability, and traits of dependence and possessiveness.

Unlike endogenous depression, reactive depression does not connote such a high genetic load.

In this way, this type of depression is associated more to the way of being and to adapt to the life and events that the person has, which can be the origin of the depressive symptomatology.

That is why reactive depression is associated with personality traits marked by anxiety, obsession, perfectionism, dependence,  low self-esteem , emotional instability or guilt.

If a person possesses these characteristics in his / her way of being, it is possible that when he / she touch a difficult or stressful situation, his / her thoughts focus on the negative aspects.

When these types of thoughts exceed their intensity and take over the person’s cognition, they can provoke a series of feelings of sadness, guilt, pessimism or even hopelessness.

If the person is not able to manage these feelings, on the one hand, they will reinforce their negative thoughts, and on the other hand, their behavior will be modified, which will be marked by activities that are in accordance with their state of sadness.

This will make the person less and less exposed to enjoyable activities, receive less gratification from the outside world, and aggravate their feelings of sadness and their pessimistic thinking.

In this way, maladaptation can lead to a depressive syndrome and make it increasingly difficult for the person to recover his previous state.

In this way, this type of depression can often be treated with psychotherapy and without the need for medication.

However, in severe cases the combination of psychoactive drugs (usually SSRI antidepressants ) and psychotherapy is recommended.

One of the psychotherapies that have proven most effective in treating reactive depressions is cognitive behavioral therapy. This treatment is based, on the one hand, on modifying the thoughts of the person.

Subsequently work on the more general ideas of the person (for example, to be happy I have to be successful in everything) and do the same to modify it for an idea more adapted to reality and therefore less negative.

On the other hand, work is done on behavior, initiating gradual tasks that the person can do correctly, teaching to manage the time properly and performing a schedule of activities so that the person is exposed to pleasant situations.

Thus, reactive depression is a type of depression very closely linked to the person’s way of being and to the adaptation that he / she makes to life, which can be markedly improved by working to improve those thoughts and behaviors that provoke or reinforce the depressive state

Two distinct types of depression can be distinguished, each with particular characteristics and causes.

One is endogenous depression, an inherited depressive syndrome that arises through genetic causes.

The other type is reactive depression, which, unlike endogenous depression, appears as a  response to poor adaptation to stressful events.

However, it has been shown that poor adaptation to stressful events does not have to cause a depressive condition and that if it does, the depression experienced may vary in severity.

Thus, to delimit those depressive pictures, with the same symptoms and characteristics as the depressions, but of a lower intensity, the term dysthymia was proposed.

Thus, when we speak of reactive depression, we must first define whether the intensity of the symptoms are severe and refer to a t major depressive rastorno , or is milder and refer to a dysthymic disorder.

As we have said, it is considered that both disorders have the same nature and the same characteristics, so to differentiate one from the other is quite simple since only the severity of the symptoms should be dictated.

A major depressive disorder is characterized by:

The dysthymic disorder is characterized by:

Thus, as we see depressive disorder and dysthymic disorder are identical, and the only differences they have are the intensity and duration of symptoms.

The symptoms of dysthymic disorder are of lesser intensity and, when they are of a higher intensity, they occur for less time.

In fact, if the symptoms of dysthymic disorder were intense for more than two weeks, the diagnosis would be changed to major depressive disorder.