The sleepwalking in children characterized by a sequence of more or less complex behaviors that occur during slow-wave sleep occurs between phases 3 and 4 of NREM sleep, usually in the first third of the night.

It is classified within sleep disorders and is a problem that falls within the parasomnias, in the disorders of awakening.

Parasomnias are characterized by abnormal events or behaviors associated with sleep, its specific phases or moments of the sleep-wake transition.

Other parasomnias besides sleepwalking are nightmares, night terrors or other unspecified parasomnias ( sleep paralysis, behavioral disturbance of REM sleep).

An episode of sleepwalking begins with bodily movements that can reach the subject to sit on the bed in an abrupt manner or can also get up and start wandering.

It may be associated with other sleep disorders. In this way, we frequently find that the same individual also presents somnambulism, somniloquy, which indicates that there could be some kind of relationship.

In addition, in children, many episodes of sleepwalking precede nocturnal terrors, as well as children with enuresis, are more likely to experience sleepwalking throughout adolescence.

With disorders of awakening, we refer to the manifestations of partial awakening that occur throughout the dream. They are primary disorders of the mechanisms of normal awakening.

Classification and diagnosis of sleepwalking

Sleepwalking is included within the parasomnias. They are not serious disorders in childhood, although they can become annoying and draw the attention of the family because they are bulky.

In addition, excessive fatigue, feverish processes or anxiety can increase them.

The diagnosis of a parasomnia must be made with a detailed clinical history and in some cases, a polysynography can be used to differentiate it from some types of epilepsy.

During the episode, the child may respond in monosyllables to the questions but not always, since he or she will generally not understand the meaning of the words.

In addition, it is difficult to wake him up because he is deeply asleep and if he is able to do so he will be insecure and will be strange since he will not recognize the situation.

Sleepwalking is found in the Diagnostic and Statistical Manual of Mental Disorders (DSM-V), within parasomnias and non-REM sleep arousal disorders.

In it, it is diagnosed when the person has repeated episodes in which the individual gets out of bed and walks during sleep.

During this episode, he has his gaze fixed and blank and is relatively insensitive to the efforts that other people make to communicate with him, waking up only after much difficulty.

Symptomatology and characteristics of sleepwalking

Sleepwalking would consist of a dissociated state of consciousness since the phenomenon of sleep (neurophysiological state) is combined with that of waking (appearance, behavior). It would be considered an arousal disorder.

As we have said, it is observed in the first half of the night, when phases 3 and 4 of non-REM sleep are more frequent.

Due to the characteristics of the disorder, it would be expected to consider that it happened during REM sleep, where there is a rapid encephalographic activity and there is a high cerebral activation.

However, in the records, it is observed that it appears in non-REM sleep, where the cortex is progressively deactivated and slow waves appear, in addition to a decrease in muscle tone, lower cerebral blood flow and heart rate or glucose metabolism.

The symptoms of the sleepwalker are the body movements that he performs, which can lead him to get out of bed, to wander, to sit on it, and so on.

In addition, he keeps his eyes open and fixed, being able to inspect the environment and thus avoid the different objects that may be blocking his way.

However, there are different risks, such as being tripped and falling or falling down stairs or a window.

Occasionally he can speak, although the articulation he presents is very poor and is limited to murmuring, usually.

In addition, a false response occurs throughout the episode, whose end can occur in multiple ways. In this way, attracting the attention of the person or waking up does not usually have a result.

The duration of the sleepwalking episode is variable since it can go from about 1 minute to even exceed 30 minutes. And usually, a single episode takes place in one night.

The frequency with which it can occur can be even several episodes within a week and can even last several years.

In addition, the person with somnambulism does not have to have any alteration in the behavior during the day, since the problem occurs exclusively during sleep. Neither does it have to predispose to other pathologies.

However, the occurrence of frequent sleepwalking episodes worries the family and there may be an alteration in relationships with other people.

Sleepwalking implies that the child automatically repeats behaviors he has learned during waking periods during sleep. The child is deeply asleep when he does it.

A typical sequence of events may be that the child gets out of bed, asleep even if his eyes are open, go to the flavor and pee on the floor and return to bed, for example.

In addition, the most frequent form of appearance of sleepwalking is that which appears in childhood, presents a family predisposition and disappears at puberty.

However, there is another less common form that is when it appears in preadolescence and had not been present before. In this case, they are usually reactive ?? and it is usual to be comorbid to other psychopathological manifestations.

In children with somnambulism, there is the amnesia of the episode ?? or a? fragmentary memory? 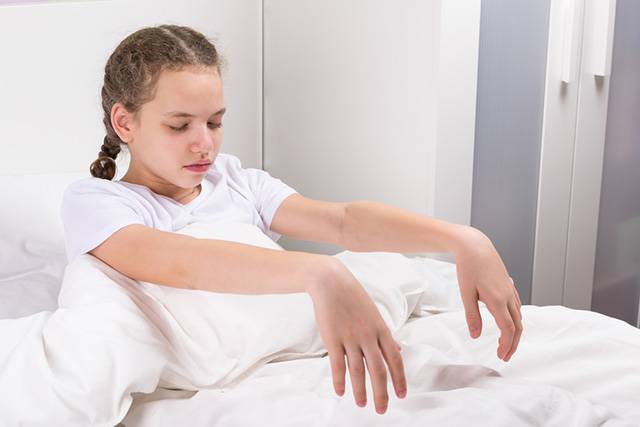 Sleepwalking could have a hereditary base since it usually occurs to a greater extent in children whose parents were also somnambulists in their childhood than in the normal population.

In addition, in monozygotic (identical) twins there is greater concordance than in dizygotic(twins), which would also support this statement.

On the other hand, we could indicate that there is a genetic predisposition in children that in times of stress (for example, school stress or exams) would awaken these episodes.

Sleepwalking in children does not indicate that there are also effective alterations, which does seem to be related is that stressful episodes exacerbate their appearance.

Sleep deprivation can also affect the time to shoot episodes of sleepwalking.

Different hypotheses about the etiology of sleepwalking have been described. Both emotional factors and maturational delays have been included, for example.

Other studies have shown, through the polygraph, that it is a disorder of awakening, where the subject, after phases III and IV of the dream, passes abruptly to the first two phases, so that a superficial dream occurs.

According to a study by the University of Washington (United States) that was published in the journal “Neurology”, a failure on chromosome 20 could help to show sleepwalking.

We could conclude that this alert disorder is due to an interaction between genetic, maturational, organic and psychological causes and that it usually occurs in stages of the keys for child development.

Sleepwalking begins between approximately 4 and 8 years, being more frequent in the male than in the female.

In addition, it is common to disappear throughout adolescence, so it is a disorder most often given in childhood.

Around 15% of children have at some point an episode of sleepwalking. Normally it disappears spontaneously at 15 years old and after this age, only 0.5% of adults conserve these episodes of sleepwalking.

Also, several studies have shown that about 25% of children have one episode per year and 10% at least once a week.

When episodes are very frequent or persist with age, it is advisable to perform the differential diagnosis with temporal lobe epilepsy.

It is important to note that the prevalence of sleepwalking increases when a nap is suppressed prematurely.

In children under five years who are abruptly removed from the siesta period, there has been an increase in episodes of parasomnias linked to deep sleep, among which we find sleepwalking.

It happens because a “sleep deprivation” occurs so that when children start sleeping at night, they quickly enter the 3-4 phase of sleep.

Sleep disorders in children should be evaluated considering their age since there are pathological behaviors that at certain ages can be considered normal or vice versa. And also ask if there really is a problem or are expectations of the parents.

Parents should be informed and reassured since these sleep problems are benign and their evolution is favorable.

In the evaluation should take into account the anamnesis and physical examination (if it is a transient or chronic problem, etc.), you can use sleep diaries and questionnaires, psychophysiological techniques, etc.

In the case of sleepwalking, a thorough history of the dream should be made, the episode time after the beginning of the dream, the family history of parasomnias, and episodes may even be recorded with a camera.

Some sleep disorders and this is the case of sleepwalking, in which the professional must make the differential diagnosis with other neurological diseases, usually with epileptic seizures.

In most cases, the diagnosis can be made using EEG and polysomnigraphy techniques. The EEG record during sleepwalking shows a combination of alpha, theta and delta frequencies, without a typical wakefulness pattern.

In sleepwalking episodes, there is no evidence of complete awakening even though the person’s behavior may be complex. The child shows a behavior of absence of response to stimuli and different levels of autonomous activation.

There is no specific treatment, although episodes usually decrease with the child’s age. Normally, since it is a benign sleep disorder, no special treatment is usually necessary.

In the treatment of sleepwalking, parents should take care that the child is not harmed during the episode.

It is recommended that they take into account the access to the windows, avoid dangerous objects inside the room, lock dangerous places such as windows or doors, avoid having high beds or bunk beds, block the stairs, etc.

The precaution also includes avoiding all the factors that can trigger the episodes: fatigue, anxiety, etc. And you should follow good sleep hygiene.

In addition, if it is an intense problem and anguish to the parents, the specialist can be asked for an assessment to deal with pharmacotherapy, with diazepam in a short period of time.

Another technique that is also used in the treatment of sleepwalking episodes is to awaken the child approximately 15 minutes before it happens.

The most appropriate is to attend to environmental control measures to avoid accidents and also to use behavioral procedures that are less intrusive and with fewer side effects than medication.

Some authors propose that a practice based on scheduled and therapeutically controlled naps can mitigate or reduce the frequency with which episodes of sleepwalking occur due to their effects on deep sleep.

Another alternative that could be evaluated is to put some kind of alarm that can help the child not get hurt when he gets up during the night.

How to act before the episode? During these, it is advisable to take the child back to his bed talking to him in a relaxed manner. In addition, you should speak with short and very simple sentences.

Also Read: What are Rare Diseases?

Sleepwalking is not a serious health problem for the child or affects their brain development. However, it can affect your night rest and may worry the family a lot, so prevention, in this case, is the most appropriate measure.