The social phobia is characterized by excessive fear of relacionarsee in social situations, to be publicly humiliated or act in public. It is estimated that it suffers up to 13% of the population at some vital moment.

It usually begins in adolescence and is usually more common in young people aged 15-29, with little education, single and low socioeconomic class.

Descriptions of shyness have been appearing in literature since 400 BC with Hippocrates, who made this description:

“He does not dare to be in company for fear of being dishonored or used; Thinks that other men are watching him. “

The first mention of the term social phobia was made at the beginning of the 20th century. Psychologists used the term “social neurosis” to describe extremely shy patients.

The idea that social phobia was a separate entity from other phobias came with the psychiatrist Isaac Marks in the 1960s.

This idea was accepted by the American Psychiatric Association (APA) and was officially included in the third edition of the DSM.

Its definition was revised in 1989 to allow its comorbidity with the avoidant personality disorder.

Just because you are nervous in some social situations does not mean that you have social phobia (FS).

Many people are shy or too self-conscious and that does not cause them big problems in their daily lives.

Also Read: What is Obsessive-Compulsive Disorder?

FS if it interferes with your routine, can cause anxiety and stress, and decrease your quality of life.

For example, many people get nervous when speaking in public , although people with FS feel worried for weeks or months before doing so or literally become paralyzed when they do.

Avoid social situations to a degree that limits your activities or interrupts your life.

The need to always be surrounded by someone you know.

Drink before social situations to reduce the nerves.

It is normal for a child to be shy. However, when you have FS you experience extreme discomfort when engaging in daily activities such as playing with other children, reading in class, talking to other adults, or acting in front of others. 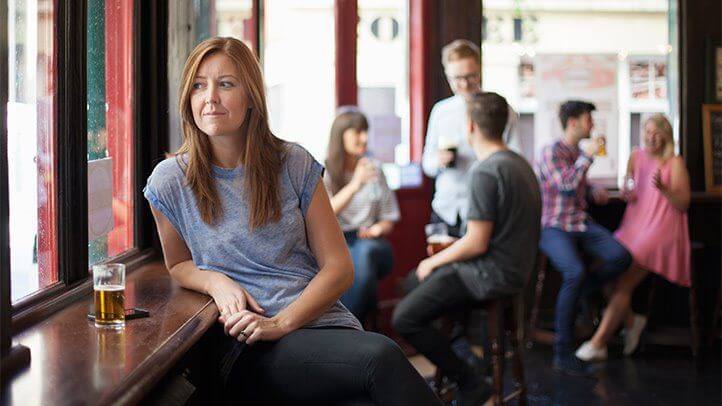 The following situations are often stressful for people with FS:

The following descriptions could be from people with FS:

“In any social situation I am afraid. I am anxious before leaving home and even more during the whole event. The closer I am to the social situation, the more anxious I am. My heart starts beating and I start to sweat when I think about social situations. “

“When I walk into a room full of people, I blush and feel as if everyone is looking at me.”

“At school I was always afraid of being called, even when I knew the answers. When I had work, I hated to see my boss. I could not eat with my colleagues or go to corporate parties. I worried about being tried or being looked at, I did not want to look silly. Sometimes I could not eat or sleep for days before a meeting. “

Currently it is considered an integrative model. That is, the causes that intervene in the development of social phobia are biological, psychological and social.

Scientists have yet to determine the exact causes. Studies suggest that genetics play an important role along with environmental factors.

Usually the FS begins at a specific point in life, from which it develops.

It seems that by evolution, the human being is prepared to fear people who reject us, criticize or people who show anger.

Thousands of years ago, our ancestors would avoid hostile rivals who might harm or kill them; Is something that actually occurs in all species.

This theory would argue that we have inherited the genes of those people who learned to move away from these signs of violence.

As early as 4 months some babies show patterns of shyness when they cry or are agitated by social stimuli or toys.

It can inherit a tendency to be socially inhibited.

Growing up with overprotective or hypercritical parents is also associated with FS.

In this factor intervenes the learning that is not in control of the events.

In this case, the person would feel anxiety every time he lives a social situation similar to the one that caused the anxiety attack.

Real situations that produce trauma, such as bullying in adolescence or childhood can also be given .

On the other hand, it is also influenced by the fact that parents transmit to their children the concern for the opinions of others.

A negative social experience can cause FS to develop, with interpersonally sensitive people more likely to develop it.

Approximately 50% of people diagnosed with social anxiety have had a traumatic or humiliating social event.

Like direct experiences, observing or hearing about negative experiences of other people can develop the FS.

Also, FS may be triggered by the long-term effects of not fitting in or being bullied, rejected or ignored.

Attitudes towards shyness and avoidance are factors that have been related to FS.

One study found that the effects of education on the part of the parents depended on the culture.

American children seemed to be more likely to develop FS if their parents emphasized the importance of others’ opinions or used shame as a disciplinary tactic.

However, that association was not found in Chinese children. In China shy or inhibited children are more accepted than their peers and are more likely to be considered to lead, unlike in Western countries.

Although the exact neuronal mechanisms have not been found, there is evidence linking FS with imbalances in some neurotransmitters and hyperactivity in some brain areas.

Misuse of stimulants, such as amphetamines, to increase self-esteem and improve social performance is common.

Although there is little evidence of abnormality in serotonin neurotransmission, the limited efficacy of drugs that affect serotonin levels may indicate the role of this neurotransmitter.

Paroxetine and sertraline are two SSRIs (selective serotonin reuptake inhibitors) that have been confirmed by the FDA to treat social anxiety disorder. SSRIs are believed to decrease the activity of the amygdala.

The amygdala is part of the limbic system , which is related to fear and emotional learning.

People with social anxiety have a hypersensitive amygdala in threatening social situations or hostile facial faces.

On the other hand, recent research has indicated that the anterior cingulate cortex, which is related to the experience of physical pain, also seems to be related to “social pain”, for example with group rejection.

Generalized: if fears refer to most social situations.

FS shows a high degree of comorbidity (co-occurrence) with other psychiatric disorders.

In fact, one population study found that 66% of people with FS had one or more additional mental disorders.

FS often occurs along with low self-esteem and clinical depression, perhaps due to a lack of personal relationships and long periods of social isolation.

To try to reduce anxiety and depression, people with social phobia can use alcohol or other drugs, which can lead to substance abuse.

It is estimated that one in five people with FS also suffer from alcohol dependence, although other researchers suggest that FS is unrelated, or that it is protective against problems with alcohol.

Other disorders common with FS are:

The most effective treatments for social phobia are behavioral cognitive.

Cognitive behavioral therapy aims to modify thoughts and behaviors by more adaptive ones.

Suitable treatments may be:

It is an effective treatment in generalized social phobia. It is intended that the person actively contact with the situations he avoids, that he faces his fears and that he becomes accustomed to the situations until the anxiety diminishes.

Some indications for exposure sessions are:

If for any reason the person has not been able to learn social skills , it will be important to establish this training.

When the person is afraid to show physiological symptoms such as turning red, tremor or sweat, they may work:

In people with social phobia and some personality disorder, cognitive-behavioral therapies will have to be longer.

Group therapy may be too fearful for some people, although it has certain advantages:

Other cognitive-behavioral techniques for FS include role-playing and training in social skills, being part of group therapy.

Three types of drugs are used:

If you have FS you are very likely to have negative thoughts and beliefs that contribute to anxiety.

Challenging these negative thoughts for yourself or a therapy is a way to reduce FS symptoms.

First, identify what negative thoughts are under your fear of social situations.

Then challenge them and change them to more positive and realistic ones, with questions like:

Here are some thought patterns that are common in FS:

Read the mind: assume that you know what other people are thinking and that they see you in the same negative way in which you see yourself.

Predict the future: assume that the worst will happen.

Catastrophic thoughts: getting things out of their real importance. For example, believe that if people notice that you are nervous it will be terrible or disastrous.

Customize: assume that people focus on you in a negative way.

How do you stop thinking that everyone is watching you?

To reduce self-attention, pay attention to what is happening around you, instead of looking at yourself or focusing on your anxiety symptoms:

A change of your body when you are anxious is that you begin to breathe quickly, which leads to other symptoms such as nausea, dizziness, hot flashes, tachycardia or muscle tension.

Learning to control your breathing can help reduce those symptoms. You can practice this exercise:

In addition to deep breathing exercises, regular practice of relaxation techniques such as yoga, medication or progressive muscle relaxation will also help control the symptoms of anxiety.

One of the most valuable things you can do to overcome the FS is to face your fears into social situations.

Avoidance prevents you from doing things you would like to do, reaching certain goals, or participating in social activities.

The following tips are good ways to start interacting with other people:

The following tips can help you reduce your anxiety levels in social situations: