Alcohol addiction is a true public health problem in many countries, since it costs the lives of millions of people around the world and is also linked to several phenomena that constitute a social problem, such as traffic accidents or domestic violence .

This addiction appears in increasingly younger people in Spain, which represents an even greater threat to the health of citizens

However, the normalization of alcohol consumption means that in many cases there are problems to identify the beginnings of addiction to this substance. Therefore, in this article we will see what are the main warning signs of alcoholism .

What are the main warning signs in people with alcoholism?
Alcohol abuse is one of the most common addictive behaviors in the world, since it is based on the consumption of a drug that is easy to obtain in almost all countries, and whose consumption is legal and highly normalized in most cultures .

Like most addictions, it is a very harmful disorder for the person who suffers it, which progressively increases its destructive effects on the affected person and can become lethal if it is not treated in time through the support of the healthcare professionals.

In this sense, let’s see a list of the most common warning signs that can help detect the development of an alcohol addiction in oneself, in friends or in family members. Of course, they do not have to occur all at once and, in some cases, the existence of only one of them does not imply that there is an addition; the definitive diagnosis can only be made by professionals.

1. Mood swings
Frequent mood changes in the affected person, especially irritability, bad mood and changes in mood, are usually a useful signal to detect pathologies such as addiction, since it is linked to the “monkey” after several hours of do not consume.

If this situation is prolonged over time, the person with alcoholism also tends to develop aggressive behavior towards the people around him, especially at those times when he does not have access to alcohol.

2. Change in drinking habits
Another of the warning signs that can show an addiction to alcohol is the change of habits and customs about the times when alcohol is consumed , such as, for example, drinking at times when previously you did not drink. be it very early in the morning or very late in the morning.

Likewise, changing the hours of each day to have time to drink, drink alone or get together with certain friends only to drink can also be clear signs that we are facing a case of alcoholism.

Signs that a person suffers from alcoholism

3. Control available alcohol
People with alcoholism often have obsessive control over their alcohol stores in their own home . In the same way, when preparing for a trip, they also tend to check in advance if they will have alcohol at their destination.

4. Hide alcohol at home
In the same regard to the obsession about available alcohol, people with alcoholism also tend to hide reserves of alcohol in various parts of their home / s to consume it later. 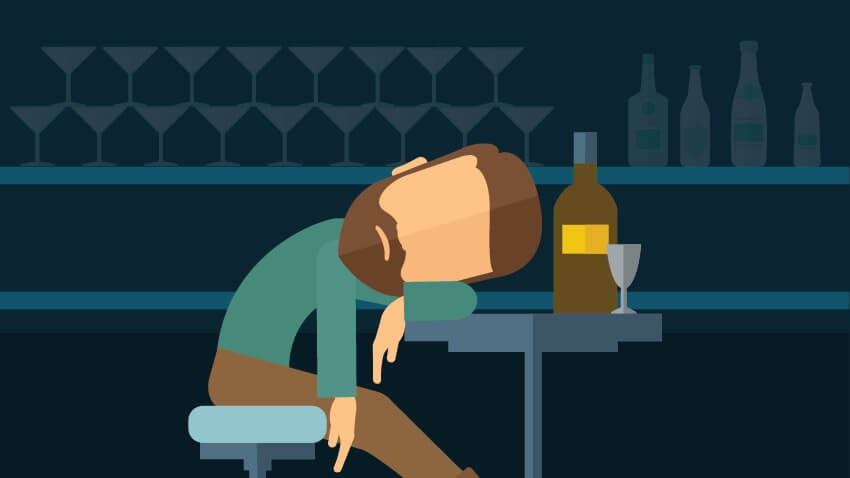 This custom has a double function; on the one hand, ensuring future alcohol reserves in the home, and on the other, hiding the addiction problem they suffer from from other family members.

5. Self-deception
There are many ways that people with alcoholism deceive themselves, and all of them are a good indicator that there is a real problem of indiscriminate alcohol consumption.

Permanent self-justifications about one’s own excesses , considering that if one is not very drunk “it does not count as having consumed alcohol” or denying that there is a problem pointing out that other people have a more consolidated addiction, are some of the most classic examples. .

6. Alteration in relationships
Alcoholism brings with it a global deterioration in the life of the person who suffers from it, and this wear and tear occurs both on a personal and physiological level and at the level of interpersonal relationships themselves .

Both the friendships of those who suffer from alcoholism and their family and partner relationships are often affected in many ways, either by the person’s mood swings or by situations of violence and aggressiveness, or even by the incompatibility of lifestyles. .

7. State of agitation without clear external triggers
One of the essential characteristics of alcohol addiction is the withdrawal syndrome , characterized by a series of internal and external physical symptoms present in the person in case of not having access to an alcoholic beverage for a certain time that goes beyond that which it usually happens between consumption and consumption.

Some of these physical reactions characteristic of withdrawal syndrome are excessive sweating, nausea, tremors, or chills.

8. Labor problems
In addition to affecting the personal environment of the affected person, alcoholism also usually has a direct impact on their professional or work environment.

Lack of performance or productivity, loss of concentration skills and relationships with coworkers are some of the signs that you have an addiction problem.

Needing to drink more and more progressively is another good way to detect whether or not a person has an alcohol problem.

It is important to note that school or academic failure can be both a precipitating factor to consume alcohol from a very young age and also a red flag that must be taken into account on its own.