The Tourette syndrome is a neurological disorder characterized by performing some movements and / or repetitive vocalizations, stereotyped and uncontrolled individuals known as tics. It can occur in children and adults.

Although it is a little known disorder, a recent study showed that Tourette syndrome affects around 200,000 North American people  and almost 2 million individuals worldwide.

In addition, this syndrome usually causes a series of negative consequences in people who suffer from it, affecting its functionality, performance,  well-being and quality of life.

In this article we will review this particular neurological disorder and explain its characteristics, symptoms, diagnoses, and  possible treatments.

Tourette syndrome (TS) is a neurological disorder that causes a series of abnormal movements and / or sounds called tics in the person.

The tics are performed automatically and involuntarily, so the person who suffers TS is unable to control the realization of this type of  movement.

These symptoms were already described by Jean Itard in 1825, when he witnessed them in a 7-year-old French girl.

This girl who gave rise to the first description of what is now known as Tourette syndrome, presented throughout his life a series of very persistent body tics  , barking vocalizations and obscene vocal emissions without being able to control them.

It was at this time when the name of Tourette’s syndrome was ruled to describe disorders with these characteristics.

However, today there are still some difficulties in the diagnosis of this syndrome among mental health professionals.

In fact, the Minnesota Association for Children’s Mental Health reports that practically 80% of people with this disorder are “self- diagnosed ” or  diagnosed by their relatives after learning about the syndrome.

That is why there may be some confusion today about what Tourette syndrome is and what characteristics or symptoms should be  presented to configure its diagnosis.

If I have tics in any part of the face or body does it mean that I have Tourette’s syndrome?

The answer is no, Tourette syndrome does not consist in witnessing a single tic, since the symptoms of this disorder include:

In this way, it is clearly seen that Tourette’s disorder does not consist of a simple appearance of tics since it constitutes a disease  made up of a series of more complex characteristics.

In fact, tics are relatively common symptoms, especially among children and young people, and the fact of suffering from them does not dictate that you are suffering from  a psychopathology such as Tourette’s syndrome.

As we have seen so far, the main symptoms and manifestations that occur in the TS are those movements popularly known as tics.

However, there is some confusion when it comes to specifying what is a tic and what is not a tic.

Tics are considered involuntary movements (motor tics), very brief, sudden, arrhythmic, recurrent and stereotyped, or sounds  caused by the movement of air through the nose, mouth or throat (sonic tics).

Thus, the first assessment we must make when talking about tics is to take into account that there may be both motor tics (when we talk  about movements) and vocal tics.

Both tics have the same characteristics, since they are involuntary, brief, sudden, automatic and recurrently appear in a stereotyped way  .

In the same way, both motor tics and vocal tics can be divided into simple or complex, depending on their qualities.

The simple motor tic is the best known form of tic and is possibly what many of us really interpret as a tic.

It consists of a sudden, brief and isolated movement, such as blinking, closing the eyes, contracting the shoulders or nose, shaking the head, closing  the hands, contorting the fingers, opening the mouth, etc.

The complex motor tic for its part consists of making patterns of movements more coordinated, sequential and slightly complex. These types of tics  may not seem as automatic as the previous ones and may be interpreted as volunteers.

Examples of this type of tics are acts such as touching, jumping, making obscene gestures (corropraxia) and imitating movements made by other people  ( ecopraxias ).

These types of movements are far from what is popularly known as tic, but they are the same symptom, since the person who suffers them performs  these actions as automatically and involuntarily as simple tics.

Vocal tics can also be differentiated between simple and complex. Simple vocal tics include a wide variety of disjointed sounds and  sounds produced by the passage of air through the nose or mouth, such as throat clearing, slurping or grunting.

On the other hand, complex vocal tics are sounds and noises that have a linguistic meaning, that is, they are developed vocalizations that can  include syllables, words, or even phrases and complete sentences,

An example of them is the fact of repeating words spoken by others (echolalia), repeating their own words (palliaia), and the vocalization of  obscene words in a recurrent manner (coprolalia).

This type of tics, as happens with complex motor tics, despite constituting more elaborate actions, the subject does them in a  totally involuntary way. 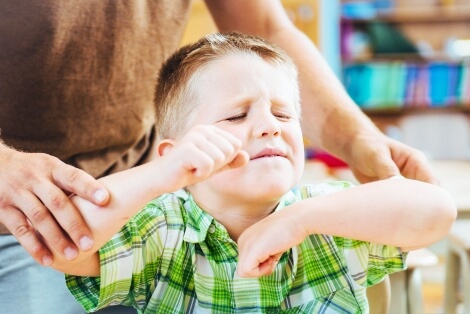 The symptoms that appear in this syndrome are the tics that we have described previously, both the motors and the vowels, as the simple ones and the  complex ones.

The most annoying and disabling tics that can occur in Tourette syndrome are those that include motor movements that produce self-inflicted damage such  as striking the face or different parts of the body.

Also, coproralia (emit obscene words or socially inappropriate) can greatly limit the patient’s day to day, cause great  difficulties to relate properly and cause problems in some cases.

The same happens with echolalia (repeating words or phrases that other people say) and ecopraxia (doing the same with movements), since they  can limit the person’s development and socialization.

Thus, we see that the most important tics that occur in the TS are not those popularly known and nominated as simple motor tics, such as  closing the eyes or moving the shoulders.

The symptoms that occur in this disorder are much more complex, annoying and disabling, a fact that turns Tourette syndrome into a  serious disorder that may require a certain therapeutic approach.

Likewise, the majority of people suffering from TS report that their tics occur in response to an involuntary sensory manifestation, such as feeling  tingling, discomfort, pressure or heats that induce them to perform the determined movement.

Thus, some people with TS describe having the need to perform the tics in a certain way or a certain number of times in order to relieve  the urgency or decrease the bothersome sensation.

It is common for tics to get worse with excitement or anxiety and improve when the person is doing quiet and highly focused activities.

In the same way, certain physical experiences can trigger or worsen tics. For example, tight necks can trigger tics in the  neck or hearing a person clearing their throat can trigger a tic with those characteristics.

Finally, it should be noted that although the tics that are present in Tourette syndrome are involuntary, sometimes some people may have  the ability to suppress or partially hide the performance of these acts, and thus decrease the negative impact they have on its operation.

So far we have seen that Tourette syndrome is a disorder that is characterized by the suffering of tics in a repetitive and constant manner.

However, what tics and what patterns of appearance determine the fact of having a Tourette syndrome?

To clarify what are the characteristics of the TS, we will comment below on its diagnostic criteria that, according to the Diagnostic and Statistical Manual of  Mental Disorders (DSM), are the following:

Although these are the diagnostic criteria and can be identified at the individual level, the diagnosis of TS must be made by a  neurologist or psychiatrist, who must perform the corresponding examinations to verify whether the symptoms presented correspond to a TS.

Course of the disease

The most common in Tourette syndrome is that the intensity of tics increases and decreases over time.

It is a disorder that appears during childhood or adolescence. It can arise at very early ages (6-7 years), and always debuts before  18 years of age.

The first tics usually appear in the neck, face or head area. Later they can evolve towards other areas of the body such as trunk muscles  and limbs.

Although it is a chronic disorder, it is not a degenerative disease and some subjects can improve their symptoms as they get older,  reaching the point of not needing pharmacological treatment.

Normally the first tics to appear are the simple motors, later the simple vowels appear and finally complex tics (both motors and vowels) can arise  .

The maximum intensity of tics usually appears during childhood or adolescence. In late stages of adolescence and adulthood, despite the persistence of  the disease, it can occur at a lower intensity.

Tourette syndrome is considered an unusual disorder, however, recent studies determine that between 1 and 3% of school- age children  could suffer from this disease.

Likewise, a higher prevalence in males has been connoted. Every 4 males affected by TS only one woman would be.

Since tics are symptoms that do not cause deterioration, many patients do not usually require any treatment.

However, when the tics suffered cause a deterioration of their functioning, especially through complex tics, they must be treated with  medication.

Normally, neuroleptics are used (drugs used to treat psychotic disorders), since they partially suppress the appearance of  tics.

However, these drugs do not allow the symptoms to be completely eliminated and they usually cause a series of negative side effects: sedation,  weight gain, slow thinking and movements, etc.

Other types of drugs can also be used, such as clonidine or guanfacine, drugs used to treat hypertension, or stimulant medications such  as methylphenidate and dextronfetamine.

However, these drugs have not been extensively studied and to date they have not demonstrated an efficacy high enough to  guarantee success in the treatment of Tourette’s syndrome.