The person suffering from this disorder is afraid to feel anxiety in situations where it is difficult to escape to a safe place and where immediate help is not available in case of having a panic attack.

This translates into fear of open spaces, to be in the middle of a crowd of people, to be in busy streets, in shopping centers, in supermarkets, to go to the movies, to queue, to travel by bus, metro, train, plane, et cetera.

And in being afraid to suffer a panic attack outside the home, to lose consciousness, to have a bad time, to get stuck and not be able to escape, to be ridiculed, to suffer a heart attack, to lose control, to go crazy and, even, to die.

Agoraphobia, as its name suggests, is a phobia, that is, it is a set of intense and irrational fears of which the person who suffers them is aware, but can not avoid suffering them.

That is, the person knows that his fear of open spaces and crowds is irrational and illogical, but he can not help but feel fear.

As we will see throughout the article, agoraphobia is one of the most disabling phobias that most affect the quality of life of the affected person,  preventing them from leading a normal life.

This disorder is more common in women than in men and its onset occurs at the beginning of adult life. 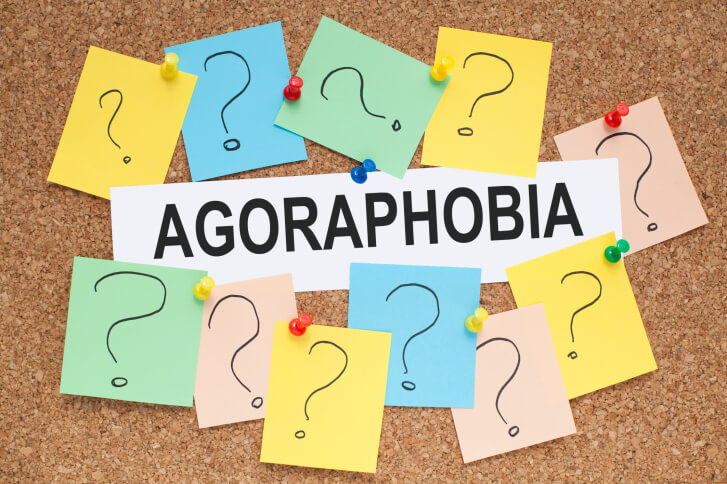 Differences between agoraphobia and panic attacks

Agoraphobia and panic attacks or panic attacks are two comorbid disorders, that is, they are two different pathologies that often occur together in the same person.

Have you ever suffered a panic attack? If the answer is yes, you know that they are very annoying and unpleasant to experience.

Panic attacks begin abruptly, reaching their maximum expression after ten or twenty minutes, although some symptoms can
remain for hours.

During the panic attack, it is very common for the person who suffers to confuse him with a heart attack, be afraid to lose control, go crazy or die.

Most frequent symptoms of agoraphobia

To the aforementioned symptoms of the panic attack are added many other symptoms typical of agoraphobia:

The person with agoraphobia does not know where the intense fear that he is coming from comes from, he is not able to locate its origin.

This ignorance makes the affected believe that all these symptoms arise due to a physical problem or a serious illness, so he goes regularly to the doctor and hospitals to perform tests to confirm their suspicions.

Consequences of the agoraphobic disorder

The main and most serious consequence is the fact that the person, regardless of whether he has suffered panic attacks or not, begins to avoid those situations and places that generate anxiety and fear, in which he does not feel safe.

That is, the person begins to avoid situations such as shopping centers, supermarkets, eating in restaurants, going to busy streets, being in open spaces, using public transport, going to the movies, traveling, playing sports …

All these avocations generate a serious problem in the quality of life of the agoraphobic, who spends most of his time at home because it is the only place where he feels safe, where he is not afraid of anything bad happening to him.

When he has no choice but to leave, he does so with a great feeling of discomfort, high levels of anxiety, fear of having a panic attack at any time … so his trips tend to be scarce and quick.

In these outings try by all means that someone knew and trusted to accompany you: a family member, a friend, the couple … the fact of being accompanied is a search for safety and control by the affected person.

Going accompanied does not make the symptoms that we just quit disappear, they are still present, although at a lower intensity. The accompaniment what it does is that the affected feel a little more secure than if he goes alone.

Another behavior carried out by agoraphobic people when they leave home is the use of “amulets”, which are nothing more than objects that for one reason or another give them a certain tranquility (a bottle of water, an anxiolytic, having a mobile phone by hand…).

The consequences of the disorder make your daily life is seriously affected, because the person stops going to work, stops meeting friends and needs the company of someone close to perform any paperwork outside the home.

In parallel, the person begins to distance himself from others, to feel alone, depressed, sad and with thoughts and ideas of suicide, which pushes him to consume drugs, alcohol and other drugs in an attempt to improve.

As it happens with any other disorder or pathology, the problem does not improve with the consumption of these substances, but it aggravates it, they could derive in an addiction.

How does agoraphobia arise?

Agoraphobia does not have a specific cause, that is, it is not due to a genetic alteration or chemical brain imbalance as with other disorders.

But there are factors that can predispose the person to develop the problem, such as the tendency to:

This disorder can arise because the person feels mild anxiety in a public and transited place and, from that moment and progressively,  begins to be afraid of experiencing these symptoms again, so he begins to avoid these places.

In the same way, it can happen that the person suffers a panic attack or an anxiety crisis in public abruptly and that is the turning point for the development of the agoraphobic disorder.

It also happens that the person mistakenly attributes the symptoms he experiences because of a specific problem (for example stress) to having an attack of anxiety or panic.

That is the person associates anxiety and panic attacks with the places where he has experienced these sensations and begins to avoid them at all costs.

The problem is that this association is growing and not only avoids the place where the panic attack happened or where the symptoms of anxiety were experienced but also many other places with similar characteristics.

As a result, the person begins to reduce the places they can go, to the point of staying at home because it is the only place where they are not afraid of suffering a panic attack or an anxiety crisis.

The person feels safe at home and the mere idea of having to leave triggers a series of very unpleasant emotions and feelings.

It could be said that agoraphobia arises by mechanisms of association and learning proper to the person and that this emergence can be progressively or abruptly. 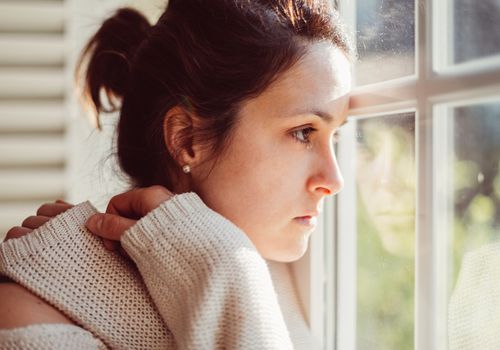 How to Overcome Agoraphobia

The agoraphobic person needs a psychology professional to be able to overcome the disorder he suffers since he has a tendency to become chronic if he does not intervene. The more time passes, the harder it will be to try and overcome.

It is very frequent that the person does not seek help for months, or even years, because the intensity of agoraphobia is usually fluctuating, it varies.

There are periods in the life of the affected in which the disorder is more severe and disabling and others in which its intensity is lower and the person believes that he is recovering, the problem will disappear soon, so do not seek help.

Within psychology, there are many different orientations and treatments.

The cognitive-behavioral treatment is the most successful in the treatment of agoraphobia and consists of gradually exposing the affected person to situations that cause fear and anxiety (open spaces and crowds).

For this exposure to be successful, the patient is previously taught the necessary skills to face their fears, such as relaxation techniques, cognitive techniques or identification of bodily symptoms.

In many psychology cabinets, associations and centers have virtual reality systems for the treatment of various pathologies,  mainly phobias.

With this new system, the patient is exposed in a virtual and progressive way to their fears. Ideally, the virtual exhibition should be combined with the real exhibition to obtain better and more lasting results.

If panic attacks occur along with agoraphobia, the technique of interoceptive exposure will be trained with the patient.

This technique consists of exposing the affected person to the symptoms that he fears, that is, to the symptoms of the anxiety attack. In this way, the patient becomes accustomed to these sensations, learns to identify them and can control them.

Many patients put resistance to the set of techniques used in the treatment of agoraphobia because their logic tells them to avoid what causes anxiety and fear, and the therapist is proposing just the opposite.

To break down this resistance the therapist must explain to the patients very well what the treatment consists of, why it is done in this way and that the exposure is going to be carried out gradually and according to their preferences.

There are many pieces of research, studies, and experiments that show that to overcome a phobia the patient must face it, he must face what he fears, preferably in a progressive way.

For people who do not want to go to individual therapy or for those who want to supplement this, there are group therapies with agoraphobes. The choice of one therapy or another will depend on the tastes and preferences of the patient.

Group therapies are very beneficial for patients because they find support in other people who are going through the same thing, feel understood and can both help and are helped by people who consider them equal.

In many cases, the treatment consists of the techniques that I have briefly explained here together with the consumption of certain drugs, mainly anxiolytics, and antidepressants.

The drugs can be prescribed for the treatment of agoraphobia or for some type of problem derived from this disorder, such as depression, but they should not be the treatment of the first choice. 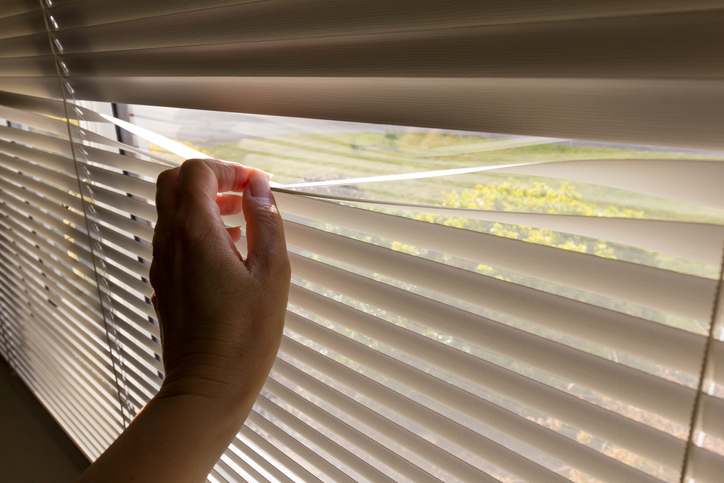