The amaxophobia or fear of driving is one of the most growing phobias in our society during the last years.

I think anyone would agree to conclude that, like many other phobias, the fear of driving can become very disabling for the person who suffers.

However, this psychological problem can be overcome through proper treatment and a good dose of personal effort.

In this article I will explain what it is, what it is about and what treatments and strategies can be useful to overcome the irrational fear of driving. 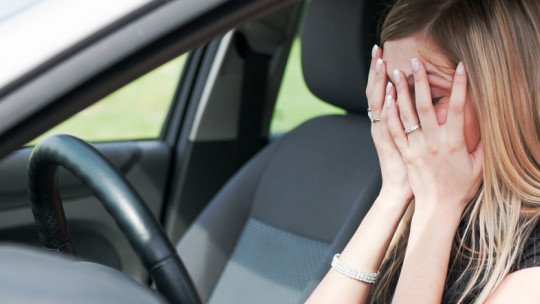 When we talk about amaxophobia, we are talking about an irrational, disproportional and disadaptive fear to drive .

So, the first differentiation we must do is the following: fear caused by lack of confidence in driving vs. phobia or irrational fear of driving.

The phobia is a special type of fear and differs from other types of fear by the following aspects: it is disproportionate with respect to the exigencies of the situation, can not be reasoned by the person who suffers it, it is beyond voluntary control , is maladaptive and leads to avoidance of the dreaded behavior.

Therefore, if the fear or fear that you suffer when you are driving the car does not meet these requirements, we are not before a phobia, but before another type of fear less incapacitating, which can be overcome by working on those aspects that can be cause: lack of practice in driving, problems of self-esteem , little adaptation to a new vehicle, etc.

As we have commented, amaxophobia is defined as an irrational and unreal fear to drive. This fear causes a total of 14 symptoms in people who suffer when they perform the dreaded behavior (driving) or simply when they imagine or think about it.

To speak of amaxophobia, it is not necessary that all these symptoms be present, but the set of symptoms that are experienced are predominant by the ones just mentioned.

As you can see, this fear is characterized by a combination of:

These three groups of symptoms, are those that define anxiety as a disorder, and therefore are basic to make the diagnosis of amaxophobia.

So, if when you imagine, think or do the conduct of driving notes these three types of symptoms, manifested in an exaggerated and disproportionate way, you are likely to have a phobia to drive.

It should be noted as the main element to detect amaxophobia , the fact that this fear and these symptoms are caused specifically by the conduct of driving, and not by other sources.

And how many people suffer from amaxophobia?

Well look: according to the latest studies carried out in Spain, it is concluded that about a million and a half people suffer this problem.

So when we talk about amaxophobia, we are talking about a much more frequent problem than we might think, and without an adequate therapeutic approach can be very disabling, since the person who suffers can be “forced” never to drive, or to drive with much discomfort due to this pathology.

Regarding the 1.5 million who suffer from amaxophobia, it is estimated that almost one million are women, and about half a million are men. Thus , this problem affects in a greater proportion the female gender than the male gender .

After seeing these data, which are at least astonishing, let us go and look for an explanation of why this disorder exists, and what its causes are.

A review of the scientific literature on specific phobias does not seem to have a single cause for these problems. However, we can comment on a number of factors that seem to be involved.

According to ” The Densy Psychological Services, ” a group of mental health professionals in the UK , these factors would be:

These would be the three situations that could be related to the development of amaxophobia.

But are these the only causes? Obviously not, since these situations may have suffered many of us, and we do not necessarily have to develop a phobia of driving.

So, are there genetic factors related to amaxophobia?

The answer to this question is yes, there are people who are more sensitive to anxiety , and therefore are more likely to experience certain levels of anxiety in these situations, which could play a key role in the development of amaxophobia.

The answer to this question is somewhat more complex. According to researchers Fyer et al., There is a higher prevalence of specific phobia in those people who have a first-degree relative suffering from a specific phobia.

However, it does not appear to be specified in the transmission with respect to the feared stimulus.

That is, if one of your parents suffers from amaxophobia, you are more likely to have a specific phobia, but it does not have to be a phobia to drive as your parent, but can be a phobia of any specific stimulus (animals, heights, blood , etc.).

Therefore, we could not state that there is a demonstrated genetic transmission in the phobia to drive of particular form, but yes in the transmission of specific phobias of different types.

To end the causes of amaxophobia, I would like to comment on a series of personality traits , which according to the II Report on Amaxophobia, prepared by the Road Safety Institute of FUNDACIÓN MAPFRE , are prototypical of people suffering from amaxobobia.

According to this study, some of the traits would be the following:

Likewise, insecurity, fear of lack of control, depression , the presence of other phobias (such as claustrophobia or hematophobia), or exposure to prolonged states of stress, could also be related.

Treatment: how to overcome the fear of driving

According to Dr. Alan Eisenstat,  amaxophobia begins with the thought that an accident can occur.

The more you think about the possibility of having an accident, the more anxious you will be, and the more symptoms characteristic of amaxophobia you will experience.

This formulation on amaxophobia is agreed by most cognitive-behavioral psychologists around the world for the treatment of phobias and many other types of anxiety.

According to this conceptualization, the reason anxiety (and phobia) is maintained is because avoidance of dreaded behavior prevents you from learning that the possibility of having an accident is less than you think.

So, one thing is clear: to overcome the fear of driving, you have to drive . Without getting into a car and grabbing a steering wheel, it is impossible to overcome amaxophobia.

To properly treat a phobia we have to do it through the 3 components we mentioned above: The physiological, psychological and behavioral component.

The most effective and most widely used technique is relaxation techniques , especially those that control breathing, such as diaphragmatic breathing.

The psychotherapist teaches these techniques to the person suffering from amaxophobia, so that he is able to control his breathing.

By controlling your breathing the level of body activation decreases, and therefore all those physical symptoms that you suffer when you have anxiety, such as tremor, palpitations and sweating decrease.

By decreasing these bodily symptoms, the feeling of anxiety and discomfort of noticing these alterations in your body decreases. Learning to control these symptoms through relaxation is basic so that when you get into a car, you dominate anxiety, and you do not dominate it.

The patient is taught how to reduce the tendency to think that he is going to have an accident. To do this, an effective technique is Socratic interrogation.

This technique consists of asking the psychotherapist questions, so that in the end the patient runs out of arguments to defend the phobia. It should be remembered that phobia is an irrational fear, so this technique tries to expose the irrationality of phobic thinking.

Through Socratic interrogation you try to change the idea that you are going to have an accident with total probability. However, it is done in a rational way, and the possibility of suffering an accident remains, since it exists. But the overestimation of suffering is eliminated.

In this yes that touches to get in a car and to start to drive.

This intervention is not usually performed before the previous two have been started and is performed through a professional rehabilitator.

When you start this intervention, you are already minimally able to control your anxiety when you get into the car through relaxation techniques. The goal is then to drive and experience firsthand what happens when you drive.

Through repeating driving behavior and witnessing that you do not have accidents, you will maximize the elimination of the idea of ​​having an accident in complete safety when driving. Likewise, resources are provided to handle difficult situations on the road.

Currently, in Spain there are a large number of specialized driving schools for the treatment of this problem, as well as psychotherapists specialized in phobias and therapies and courses through the internet.

So, if you suffer from amaxophobia, you should look for these types of resources, because through proper treatment, you will overcome your fear of driving.