People who suffer from this disorder experience high feelings of fear when they are in contact with other people. Likewise, the fact of interacting with other individuals gives them a marked response of anxiety and discomfort.

It is a serious psychological disorder that is especially prevalent in China and Japan. As a main consequence of the disease, it is connoted a remarkable isolation of the subject with respect to the rest of people.

This fact is explained due to the discomfort caused by contact with others. People with anthropophobia usually choose to avoid all human contact in order not to experience feelings of anxiety and fear.

Currently, this type of phobia is a psychopathology well studied and delimited. Likewise, interventions that may be effective for its treatment have been developed.

In this article we review the main characteristics of anthropophobia. Its symptomatology and diagnosis are explained and the treatments that can be applied for its correct intervention are discussed.

The term anthropophobia comes from the Greek and literally means “fear of the people”. This disorder is also known as social phobia or phobia of interpersonal relationships.

The main characteristic that defines psychopathology is the presence of a pathological fear towards people or human company.

By pathological fear is understood phobic fear, that is, a type of fear that is excessive, irrational, uncontrollable and maladaptive.

In diagnostic terms, anthropophobia constitutes a subtype of social phobia, so that both disorders are not exactly identical, although they are very similar.

People with this disorder experience phobic fear and, as a consequence, a marked response of anxiety whenever they are in contact with other people.

Likewise, these sensations may appear even when the individual is relatively close to another person, even if they are not interacting or communicating with them.

Anthropophobia is a psychological alteration that can develop in people of any age, sex and culture. However, in China and Japan a higher prevalence of the disorder is connoted, which, in their culture, is cataloged through the disease known as Taijin Kyofusho.

Delimitation of the fear of anthropophobia

Experiencing fear through contact with other people is not a normal response of human beings.

However, this does not mean that every type of fear caused by interpersonal relationships or contact with others has to be directly associated with anthropophobia.

In fact, the sensations of fear in such situations need not refer to the presence of a psychopathology. Unless the fear experienced presents a series of characteristics.

In this sense, the attributes that must be fulfilled about the fear experienced in anthropophobia are those that make it possible to identify the presence of a phobic fear.

This type of fear should appear whenever the individual contacts or is close to another person, and is characterized by:

The first characteristic that defines the fear of anthropophobia is its intensity. The person experiences sensations of fear totally disproportionate to the demands of the situation.

In practical terms, this characteristic translates into the experimentation of high sensations of fear in situations in which there is no apparent danger to the individual.

The situation is safe and does not present threats, but the subject interprets it as highly threatening and agonizing.

Probably, the most important characteristic of the fear of anthropophobia lies in the mental processes that govern its appearance.

The phobic fear is not governed by rational, coherent or congruent thoughts, but appears through totally irrational thoughts.

Both the subject himself and those around him realize that there is no reason to experience sensations of fear when in contact with other people. 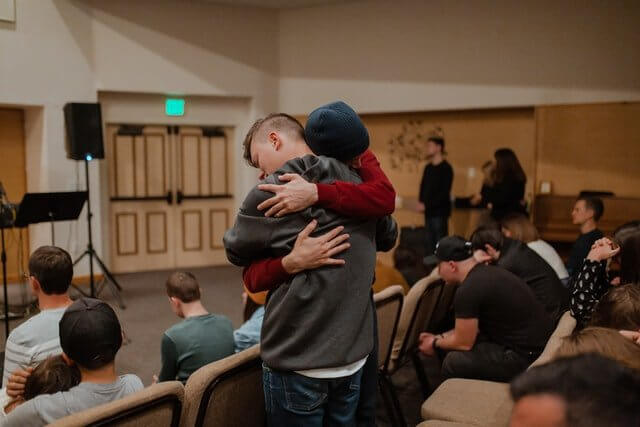 Although the individual himself is able to interpret his own fears as irrational and unjustified, he is not able to control the appearance of fear.

The sensations of fear appear in a totally automatic and uncontrollable way, without the subject being able to do anything.

At certain stages of life, especially during childhood or childhood, fear of interpersonal relationships usually increases.

It is common for children to be fearful when it comes to interacting with schoolmates or with people they do not know.

However, the phobic fear of anthropophobia can appear at any stage of a person’s life. And whatever its moment of appearance, the fear of contact with others remains unchangeable.

Finally, the last and most serious feature of the fear of anthropophobia is that it leads to the avoidance of the feared stimulus.

The person with anthropophobia will try to avoid contact with others by all means, since this is the only resource that also allows him to avoid the fear, anxiety and discomfort caused by these situations.

The last characteristic of the phobic fear of anthropophobia reveals the main consequence of the disorder: avoidance.

This consequence is common in all types of phobia, since all of them cause discomfort when the person is exposed to their feared elements.

However, all of them differ in severity depending on the characteristics of the feared stimulus.

In this regard, disorders such as spider phobia, the blood phobia or height phobia, despite sharing many features with anthropophobia, you are psychopathologies much less severe due to the difference between the dreaded elements.

However, in the case of anthropophobia, the importance of the element feared makes the phobic fear change completely and seriously damage the life of the individual.

In general, people with anthropophobia are subjects who live locked up in their homes, practically do not communicate with others and avoid doing any activity that involves contact with another person.

Thus, anthropophobia is a serious anxiety disorder that leads the person to a marked isolation and that greatly limits the individual’s life.

The most common manifestations of anthropophobia are usually flushing, the absence of eye contact or feelings of discomfort when the person is exposed to social situations or contact with others.

However, the symptoms of this disorder go much further, and in the current literature there is an optimal delimitation of each of the manifestations that it can cause.

In this sense, it is currently defended that the symptoms of anthropophobia are characterized by being anxious manifestations and affect both the physical plane and the cognitive and behavioral plane of the individual.

The symptoms referring to the physical plane of the person refer to a set of alterations and corporal manifestations that the individual experiences whenever he comes in contact with his feared stimulus.

These symptoms can vary markedly in each case, but all of them are motivated by the same factor: increased activity of the central nervous system.

In this sense, whenever an individual with anthropophobia is exposed to contact with others, it has one of the following symptoms:

The symptoms referring to the cognitive plane include all the thoughts that the subject develops with anthropophobia regarding their fears.

These thoughts are characterized by being irrational and uncontrollable, so they appear in the mind of the individual automatically.

Likewise, they are also characterized by being very intense and magnifying the attributes and negative consequences associated with contact with other people.

These symptoms are fed back with physical manifestations, causing a progressive and uncontrollable increase in nervousness and feelings of fear and anxiety.

Finally, in the behavioral plane there are two main behaviors caused by phobic fear: avoidance and escape.

Avoidance is the behavior that motivates the patient to reject any type of contact with others and, therefore, to develop marked isolation.

The escape, on the other hand, is the behavior that appears when the individual is not able to avoid contact with others, and is characterized by rapid and abrupt behaviors that allow the person to escape from the situation.

Anthropophobia, social anxiety disorder and shyness are concepts that have certain similarities but are markedly different.

First, it should be noted that unlike anthropophobia and social anxiety disorder, shyness is a normal psychological condition that does not refer to any pathology.

In this sense, shyness can be differentiated from both disorders by:

On the other hand, the differentiation between anthropophobia and social anxiety disorder is more complex. In fact, both alterations are neither the same disorders nor different disorders.

The treatment of anthropophobia presents great obstacles due to the characteristics of the disorder itself. The individual with this type of phobia fears any type of personal contact, so he will also fear contact with medical professionals.

In this sense, due to the difficulty of establishing a close and trusting relationship between therapist and patient, the treatment that has proven most effective is the combination of medication and psychotherapy.

The pharmacological treatment is usually based on anxiolytic drugs, and usually constitutes the first part of the intervention. Through drugs, we try to reduce the anxiety of the subject and thus, provide greater capabilities to initiate personal contacts.

However, pharmacological treatment alone has not been shown to be an intervention to eradicate anthropophobia. For this reason, psychotherapy is postulated as a second part of treatment.

In this case, the cognitive behavioral treatment is usually effective, which provides the subject with tools to learn, little by little, to expose themselves to personal contact and to control the feelings of anxiety that this type of situation provokes.