The pyromania is a psychic disorder that is defined as an impulse control disorder. It is a pathology that is based on the tendency to provoke fires. It is characterized by the repeated provocation of intentional arson.

Forest fires pose a serious threat to the natural environment and its conservation. Annually, fires are produced intentionally, leading to  serious losses at an ecological, social and economic level, even endangering the lives of people.

Sometimes from the media and public opinion there is  misinformation about the causes of these fires, the profile of people who carry them out and how to deal with this problem  adequately.

In this article, I will explain in detail what we refer to as ‘ piromania ‘, what are its causes, symptoms and most effective treatments.

The pyromania in the culture and media

We must be aware that part of the forest fires that occur have their origin not in natural causes but at the hands of  human persons.

The responsibility for these acts is recorded as an administrative infraction and also classified as serious imprudence in the Penal Code.

The relationship of human beings with fire has been present since the beginning of time. In addition, human behavior is often  impulsive, unpremeditated and sometimes accompanied by tension.

It is our learning through education and coexistence in society that helps us to modulate those impulses. It is when the inability to do so arises  when we enter fully into the field of psychopathology.

The Royal Academy of the Spanish Language (RAE) defines pyromania as the “pathological tendency to provoke fires”.

From the media, on many occasions, the term pyromania or arsonist is used only to designate the author of the fire,  using it as a simile responsible that causes the fire intentionally but not as the pathology in question.

This causes misinformation and misconceptions about the term, so let’s delve into it in detail.

These disorders are characterized mainly by the difficulty for the subject when resisting an impulse, motivation or temptation to carry  out an act that may harm him or others.

Before committing the act, the subject perceives activation or tension that is resolved in the form of liberation or gratification when committing the act. Later  there is no guilt or regret for having done it.

Thus, the pyromania could be defined as a behavior that leads a subject to commit fires for pleasure or for the gratification of making them, or  by releasing accumulated tension.

The fires take place without a specific motivation and respond to an impulse that arises from the subject that can not control.

The subject with pyromania keeps his cognitive abilities, his intelligence, his capacity for planning functional. 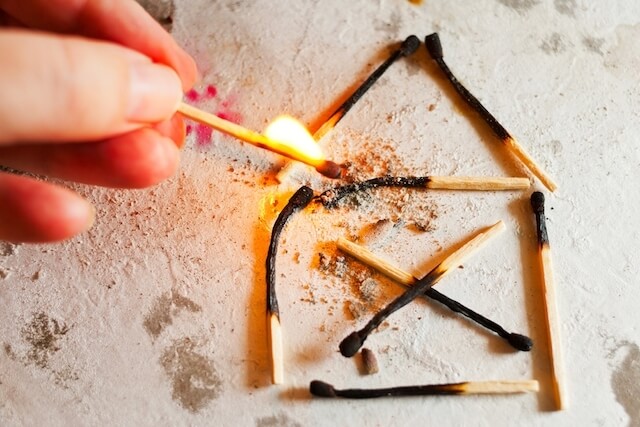 In the Diagnostic and Statistical Manual of Mental Disorders (DSM-5), we find pyromania within the set of destructive disorders,  impulse control and behavior.

The diagnosis of pyromania includes different criteria in which the affected person must cause fires deliberately and intentionally on more  than one occasion.

In addition, the person presents emotional tension or excitement before causing the fire. They are people to whom the fire and its context fascinate them, they  show a lot of interest, curiosity or attraction.

In addition, all this gives them pleasure, a gratification or relief to provoke them or to witness them or participate in the consequences that derive from them  .

It is important to note that the arsonist does not make the fire to obtain any economic benefit or as an expression of any sociopolitical ideology.

In addition, it does not do so to hide any criminal activity, nor as a way to express negative feelings, as a way to improve their living conditions  or as a response to any alteration of judgment or hallucination.

The provocation of the fire, in the case of the arsonists, is not better explained by any other conduct disorder, by any manic episode or  by an antisocial personality disorder.

In DSM-IV-TR, pyromania was included within Axis I, where all clinical disorders were included, except for personality disorders or mental retardation.

It appeared reflected in the impulse control disorders not classified in other sections, which included kleptomania, pathological gambling,  trichotillomania or intermittent explosive disorder.

In the ICD-10, classification of the World Health Organization (WHO) we find pyromania within the personality and  adult behavior disorders, in the habits of habits and impulse control.

Unlike other subjects who also intentionally produce fires, the arsonist does so by the simple question of fascination with  fire. Thus we find symptoms or characteristics such as:

It has also been associated with symptoms of sadness or anger, difficulties in coping with stress, suicidal thoughts, interpersonal conflicts.

Pyromania as the cause of fires

In Spain there is a complete database since 1968 about the causes of forest fires. This allows us to establish what the causes are and  how the phenomenon has evolved since then.

However, it should be borne in mind that in the absence of h0m0geneous criteria when defining the cause, it is often open to the judgment of the person who  interprets said database.

In 1994, a technical and scientific methodology was developed in regard to fire research, creating the Forest Fire Investigation Brigades  .

These brigades, which are made up of forestry agents or the environment, and it is from this moment when the collected times enjoy  empirical character.

In these classifications pyromania is considered an intentional cause in fires. However, we know that intentionality is not what it  marks if we are faced with an arsonist or simply an arsonist who performs it for various reasons, in order to obtain a benefit.

In many occasions, under indications of intentionality and where the author of the facts has not been found, it has been determined that the author is an arsonist,  when he has not been evaluated to know if we are dealing with a subject with a mental pathology.

For some experts, and given the subject that concerns us, we distinguish between:

* Arsonists : subject that a consequence of a mental pathology called pyromania develops a behavior that leads to the fire.

* Arsonist : subject who voluntarily and consciously spreads fire in a fire to cause destruction.

* Substance-induced disorder : subjects who, under the effect of certain substances that lead to transient volitional disturbance  can burn.

The fact of considering pyromania as a mental disorder has not been exempt, over time, from controversy.

The impulse control disorders are dated in the 19th century, with Pinel and Esquirol introducing the concept of ” instinctive impulse  ” to refer to it.

During the nineteenth century the idea that pyromania could be considered a distinctive mental disorder was rejected.

Authors such as Ray (1844) defined it as a type of insanity that nullified responsibility for the acts committed by the person.

Henry Ey, one of the authors, includes pyromania along with other paintings such as kleptomania or some homicides within the category of psychopathic personalities  .

Others like Stekel (1924) indicate that there may be a psychosexual conflict at the base that would lead the person to seek the solution in this way. Freud it  argued h0m0sexual sexual character problems.

For other authors such as Geller (1987), pyromania could be due to a communication problem, where pyromaniacs would be individuals who would possess  poor social skills.

This would imply that pyromania would be a disorder where the individual would show his anger through the provocation of a fire since he feels  inferior.

Vallejo indicates that pyromania could be a disorder where the individual (regardless of his attraction to fire) could demonstrate his courage and  power.

Throughout the classifications of mental disorders, in the DSM-I was included as an obsessive-compulsive problem, disappearing from the  classifications then to be incorporated again in the DSM-III, where it already refers to a problem of lack of control of impulses, which continues in the  later versions of the DSM.

In a family history of arsonists, has been associated with mental illness, personality disorders (specifically antisocial) and  family alcoholism.

Family problems can be found such as absence of parents, maternal depression, problems in family relationships and child abuse.

The fact of causing fires has also been associated with other problems such as the subject’s alcoholism (López-Ibor, 2002). In addition, many of  those who cause fires and do not meet the diagnosis of pyromania do suffer from other mental disorders.

For example, cases of personality disorders, schizophrenia or mania have been found.

The total incidence of pyromania is unknown, given that as we have commented throughout the article, the distinction of what is really the pathology  of pyromania has been misused.

In addition, in many cases the diagnostic criteria have not been applied properly, so that it could be said that, following them, we would be
talking only between 1 and 4%.

Some research, such as those by authors such as Lewus and Yarnell (1951) or Robbins and Robbins (1967), have argued that only 20-40% of  people who have set fires are arsonists.

If we look at what could be the profile of the subject that causes fires by the gratification or pleasure that the fire produces, we would be talking about,  according to some conceptualizations:

– Motivations for everything that surrounds the gratification around observing the fire

– Can collaborate in extinguishing work in fires

– History of learning and staff with difficult situations (abuse in childhood, for example)

In addition, these individuals are usually recognized as:

– People “mironas” before the fires, due to the fascination they feel for the fire

However, it should be noted that other authors consider that within the symptoms of the arsonists could be found:

– An IQ below the average

– Destruction in the home or family

– Dysfunctions of a psychosexual nature

Course and forecast of pyromania

It is quite unknown how he studies and what prognosis this pathology has. Some studies indicate that it seems to start during childhood. However,  other more recent ones (Roncero, 2009), indicate that it is more frequent in males and usually begins during adolescence or beginning of adulthood.

The age of maximum incidence usually occurs around 17 years.

When the start takes place during other periods, such as adolescence or adulthood, the fire tends to have a destructive character.

The beginning of the pathology has been associated with situations of personal or vital changes and crises and the impulse seems to happen episodically.

In relation to the prognosis, if the patient is able to work verbalizations in therapy, this will be better. However, if it is associated with problems of  intellectual disability or alcoholism, it will be worse.

It is often complicated by the legal consequences of the provocation of the fire.

Traditionally, pyromania was treated from the psycho@nalytic point of view, so that intervention was difficult because the  patient rejected the fact that he assumed he was responsible and using denial.

From the most behavioral therapies, aversive therapy, positive reinforcement and punishment, satiation and structured phantasies have been used  with positive effort.

Treatment for pyromania covers behavior modification therapy. It can be complicated by the lack of understanding of the problem and the  lack of demand for help on many occasions.

The person can be aware of the dangerousness of his behavior as well as the inadequacy, but since he does not regret or reproach anything, he will hardly  ask for help to change.

It is essential to work on impulse control, self-control. Role-playing can also help in the resolution of conflicts.

The focus should include psychoeducation, problem-solving skills, learning in interpersonal communication strategies and managing  difficult emotions such as anger, as well as cognitive restructuring.

Relaxation techniques, self-esteem and self-image work, as well as social skills may also be appropriate.

In some cases, psychotherapy may be combined with pharmacotherapy to treat the lack of impulse control.

By way of conclusion, it should be noted that pyromania seems to be still a mystery. We find hard to find information and investigations in this regard,  leading us to investigate all those who cause fires to study the behavior of the arsonist.