The Aphasia is a neurological disorder that occurs as a result of injury in brain areas that support language (National Institute of Neurological Disorders and Stroke, 2015).

This type of alteration can cause deficits in the expression, comprehension, reading and / or writing, completely or partially (American Speech-Language-Hearing Association, 2015).

Generally, in most right-handed and left-handed people, localized lesions at the cerebral level in the left hemisphere will cause aphasia or language-related disorders.

However, it is also possible that lesions present in the left hemisphere cause other deficits and alterations also related to language (American Speech-Language-Hearing Association, 2015).

Therefore, aphasia, in itself, is not a primary disease, but a symptom secondary to a brain injury caused by very different factors (National Institute of Neurological Disorders and Stroke, 2015).

In addition, people suffering from aphasia can also present other problems of the type: apraxia (deficit or inability to  perform motor actions directed to a goal, associated with an order, family or learned), dysarthria (deficit of motor speech programming  ) and / or swallowing problems , among others (American Speech-Language-Hearing Association, 2015).

The aphasia is this is a neuropsychological deficits alteration that produces different deficits in the language area: production, comprehension, reading and writing(National Aphasia Association, 2015).

More specifically, aphasia is a deficit or alteration of the ability to use language that produces a deficit in verbal communication  or an acquired language loss and that is characterized by the presentation of errors in the production of language ( parafasias), failures in  understanding and difficulty in finding the right words in the use of language (anomie) or in a more summary way, a loss or disorder of the language that occurs as a result of brain damage (Ardila and Rosselli, 2007) .

Generally , aphasia has always been associated with the occurrence of ischemia or stroke in the left hemisphere , however, it is now  known what conditions such as brain tumors, infections or traumatic brain injuries can also cause it (National Aphasia  Association, 2015 ).

Normally, the signs and symptoms of aphasia usually affect a specific aspect of language use: ability to retrieve  the names of objects, ability to organize words in a sentence, ability to read, etc. (National Aphasia Association, 2015).

Despite this, there are also cases in which there is a generalized deficit and multiple aspects of communication are altered (National Aphasia Association, 2015).

Who can suffer from aphasia?

Anyone can suffer a brain injury that results in the development of an aphasic type disorder, however, most  people with this type of disorder are elderly or middle-aged (National Insitute of Deafness and Other Communication Disorders , 2010).

Approximately one million people in the United States suffer from aphasia. The National Aphasia Association notes that about 80,000 people acquire  aphasia each year as a result of strokes (National Institute of Deafness and Other Communication Disorders, 2010).

The signs and symptoms of aphasia will depend fundamentally on the type, area and severity of the lesion.

In some people there will be difficulties in producing words or phrases, while others will not be able to understand others  (American Speech-Language-Hearing Association, 2015).

In addition, aphasia can also cause deficits in oral language (expression and comprehension) and in written language (reading and writing) (American  Speech-Language-Hearing Association, 2015).

The Mayo Clinic (2015) notes that people with aphasia may present some of the following characteristics:

– Communicate with short or incomplete sentences.

– Speak with sentences without literary or grammatical meaning.

– Not understanding the conversation of other people.

Despite this, the deficits and difficulties presented by people with aphasia are much wider, so they will depend on the type of  aphasia suffered. 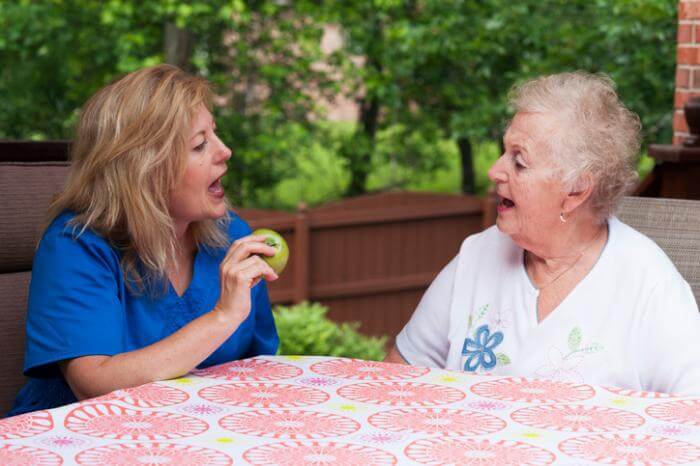 Throughout the development of the medical and / or psychological literature there are more than 20 classifications of different aphasias (Ardila and Rosselli, 2007).

In the case of the Boston group, three basic types of cortical aphasias stand out: 1) Broca’s aphasia , 2) Wernicke’s aphasia, and 3) conduction aphasia (Ardila and Rosselli, 2007).

The Broca or non – fluent aphasia , occurs as a result of damage or injury in areas of the left frontal lobe (National  Insitute of Deafness and Other Communication Disorders, 2010).

It is a type of aphasia that fundamentally affects the production of language. Those affected tend to use very short sentences with meaning, but  they are produced with great effort (National Institute of Deafness and Other Communication Disorders, 2010).

Normally, they understand the language without any difficulty but they can cause great discomfort communication difficulties (National  Insitute of Deafness and Other Communication Disorders, 2010).

At the clinical level, bitch aphasia is characterized by an expressive, non-fluid language, with poor articulation, formed by short, ungrammatical expressions and phases  that occur with great effort (Ardila and Rosselli, 2007).

In addition, people with bitch aphasia usually suffer from weakness or paralysis in the extremities of the right side of the body (National Institute of  Deafness and Other Communication Disorders, 2010).

The Wernicke ‘s aphasia or source aphasia , results from damage or injury temporoparietal areas ( Wernicke ‘s area ) (National Insitute of  Deafness and Other Communication Disorders, 2010) and have used terms such as sensory aphasia, receptive aphasia or central aphasia, for its  denomination (Ardila and Roselli, 2007).

In most cases, the lesions occur in the left temporal lobe, however, it can also develop with damage associated with  the right hemisphere (National Insitute of Deafness and Other Communication Disorders, 2010).

In the case of people with Wernicke’s aphasia, they have no difficulties in the motor production of language, but without expression. They often use  long sentences, often meaningless. They often use unnecessary words, invented or without meaning (National Insitute of Deafness and Other  Communication Disorders, 2010).

As a consequence of these alterations, it is difficult to follow the conversational thread of these people. In addition, they also present significant difficulties  in understanding language and are not usually aware of these errors (National Institute of Deafness and Other Communication Disorders, 2010).

In this type of aphasia, the major deficit affects repetition. It is characterized by a spontaneous fluid language, good comprehension, but with a  poor repetition characterized by the presence of literal paraphasias (substitution of phonemes). At secondary level, they can also appear: difficulties  and defects in the denomination, reading disorders or alterations in writing (Ardila and Rosselli, 2007).

The most common cause of brain damage in aphasia is stroke (Mayo Clinic, 2015).

A stroke occurs when the blood supply to a brain area is interrupted, either by blockage of a blood vessel  or stroke (National Institute of Neurological Disorders and Stroke, 2016).

When some brain area does not receive enough oxygen, the brain cells begin to die, so the brain areas begin to degenerate  their function (National Institute of Neurological Disorders and Stroke, 2016).

On the other hand, the damages caused to the brain level by a traumatic brain injury, tumor, infection or degenerative process can also cause  aphasia (Mayo Clinic, 2015).

– Brain tumor : A tumor is an abnormal accumulation of cells that form a mass and that will cause damage at the neurological level, both by  the pressure they can exert on other brain and spinal structures and by the spread of it through the different areas (Johns  Hopkins Medicine, 2016).

– Infectious processes : infections at the brain or spinal level can cause a significant inflammation of the tissues and  therefore cause a wide range of symptoms. Specifically, meningitis is an infectious process that specifically affects brain tissues  (National Institute of Neurological Disorders and Stroke, 2016).

In addition to these factors, transient aphasia has also been reported, due to migraines, seizures or a transient ischemic attack (Mayo  Clinic, 2015).

– Migraine : it is a type of headache that occurs in the form of recurrent attack and that causes throbbing or pulsating sensations  that usually affect one side of the head. (World Health Organization, 2012; (National Institute of Neurological Disorders and Stroke,  2015).

– Seizures : Seizures or epileptic seizures occur as a result of unusual neuronal activity that is altered causing  seizures or periods of unusual behavior and sensations and can sometimes cause loss of consciousness (Mayo Clinic, 2015).

– Transient ischemic attack : occurs when there is an interruption of the blood flow of a momentary brain area. It usually occurs as a result of the presence of an arteriosclerotic plaque or thrombotic embolus and resolves in less than 24 hours.

How is aphasia diagnosed?

Once the etiological cause has been diagnosed at the medical level, for the diagnosis of a possible alteration of the language it is fundamental that several  areas are evaluated by a specialist in neuropsychology and speech therapy (American Speech-Language-Hearing Association, 2015):

– Other aspects : general cognitive functioning, swallowing, among others.

For the treatment of language disorders there is a wide variety of therapeutic approaches (American Speech-Language-Hearing Association,  2015).

The type of rehabilitative intervention will depend on the patient’s characteristics, objectives and needs (American Speech-Language-Hearing  Association, 2015).

When the damage to the brain level is mild, it is possible that skills related to the language can be recovered. However, many of the  people who suffer from aphasia undergo therapeutic interventions, rather than recovering language at a complete level, they do so to generate  compensatory strategies that allow them to maintain functional communication (Mayo Clinic, 2015).

The recovery of language skills is usually a slow and progressive process, some make significant progress and others are able to  recover functional levels before the injury (Mayo Clinic, 2015)

Therefore, in order for a positive effect to occur in linguistic rehabilitation, it is fundamental, among other factors, to carry out an early approach . Many studies have indicated that the therapy is more affective when it starts soon after the injury.