The apiphobia , also known as melisofobia, is a type of specific phobia is characterized by an irrational and excessive fear of bees, wasps and hornets. That is to say, it is the name that receives the phobia of bees.

The fear of bees or wasps is quite common among society, mainly because of the fear that causes the possibility of being bitten by these animals.

However, apiphobia does not refer to a simple fear of bees, but is a psychopathological disorder that describes a phobic fear of these animals.

People with apiphobia experience high feelings of anxiety whenever they are exposed to these animals, so they always avoid contact with bees and wasps.

At present, apiphobia is a well-defined disorder that has therapeutic interventions capable of reversing the phobic fear of bees.

Apifobia is an anxiety disorder that is encompassed within the alterations known as specific phobias.

In this case, apiphobia is a term that comes from the Latin where “apis” means bee and “phobos” fear. That is, apiphobia is characterized by the presentation of fear towards these animals.

However, not all kinds of fear of bees are included in apiphobia. In order to relate the fear of these animals with this type of specific phobia it is necessary that bees and wasps cause a phobic fear.

The fear experienced by people with apiphobia to bees is characterized by being of excessive intensity. That is to say, the contact with these animals generates sensations of fear excessively high.

On the other hand, apiphobia is an alteration that is governed by irrational thought patterns. Phobic fear of bees is not subject to congruent and coherent cognitions.

Likewise, phobic fear is characterized by being uncontrollable. In this sense, although the subject may be aware that his fear of bees is irrational, he can not do anything to control it.

Finally, we must bear in mind that the fear that originates apiphobia is persistent and permanent. This is not subject to temporary factors, so it will always be presented if it is not properly intervened. 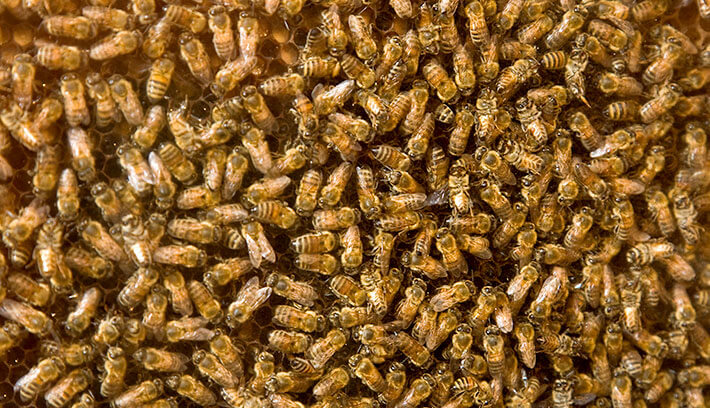 The symptomatology of apiphobia appears due to the feelings of fear caused by the bees. For this reason, the manifestations tend to be mainly anxious and these appear when the subject is exposed to their feared elements.

One of the most important symptoms of the disorder are the physical symptoms. These constitute a series of modifications in the functioning of the organism and originate due to the increase in the activity of the autonomic nervous system caused by the fear of bees.

On the other hand, cognitive manifestations play a fundamental role in the symptomatology of apiphobia. These constitute a series of irrational and negative thoughts about bees that usually generate feelings of discomfort and the need to flee from the feared element.

Finally, apiphobia is characterized by affecting the behavioral pattern of the person. In this sense, the most typical symptom is avoidance, which is defined as the elaboration of a series of behaviors that aim to avoid contact with bees.

When the avoidance behaviors fail and the subject is exposed to the bees, it is usually common for the escape to appear. That is, the behavior by which the subject is able to escape from their feared elements.

In order to prepare the diagnosis of apiophobia and to establish the presence of this type of specific phobia, the following criteria must be met:

The data about the etiology of the disorder suggest that there is no single cause for apiphobia, but that different factors may be related to the development of the disorder.

In this sense, direct conditioning seems to be the most important factor. Having lived traumatic experiences related to bees can lead to the development of apiphobia.

Currently the treatment of first choice for apiphobia is psychotherapy. Specifically, the intervention uses the most is cognitive behavioral treatment.

The main route of action of this treatment consists in exposing the subject to the bees, either live (directly exposed to the animal) or through virtual or narrative exposure.

Likewise, the incorporation of relaxation techniques can be useful to reduce the state of anxiety caused by the fear of bees and cognitive therapy to manage and modify irrational thoughts about these animals.