The batophobia is the extreme and irrational fear of the depths, constituting an anxiety disorder in which the person who suffers experience a panic and terror when exposed to their phobic stimuli. It is a type of specific phobia, so it shares the same characteristics as claustrophobia, blood phobia or spider phobia.

Thus, when a person suffering from batophobia is in a situation where he can not see the bottom or the end part (for example, a dark tunnel or a very high pit), he will experience feelings of anguish and anxiety very much. elevated.

The anguish and anxiety experienced is not limited to feelings of discomfort, restlessness or respect for the observed depth.

The person with batophobia fears above all the situations in which he can not see the end, so he will try to avoid this type of spaces at all costs, with the objective of not suffering the reaction of extremely unpleasant anxiety that causes him. 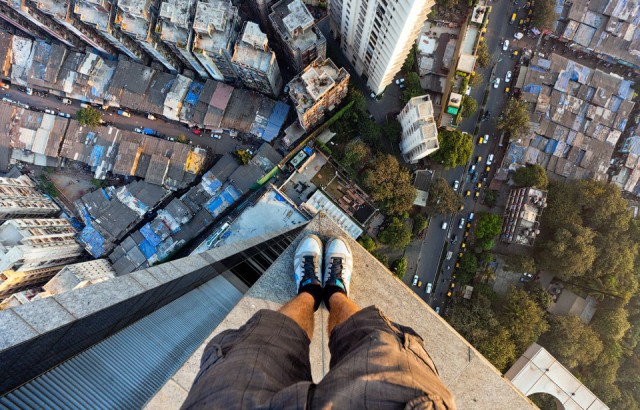 When the individual is exposed to these situations will suffer both physical and cognitive and behavioral reactions, and all of it will be accompanied by a more than high discomfort.

How can we identify the batophobia?

So far we have seen that the batophobia consists of a disease in which the person completely fears spaces that convey feelings of depth.

However, if the situations are very deep, possibly right now you have doubts to discern if you have batophobia or not.

In the first place, we must bear in mind that fear, fear or repair towards very deep spaces can be a totally normal reaction and it does not always have to make a phobic disorder.

Considering the very nature of people, those situations in which there are elements that we can not control (such as very deep spaces) can automatically activate our anxiety responses.

The body will be activated in a more pronounced way in order to be more attentive and able to monitor the possible dangers that are not controlled (because the depth prevents them from being seen).

However, as long as this anxiety reaction is not exaggeratedly high and the fear experienced can be controlled, we are not talking about batophobia and we are referring to a totally normal reaction.

Thus, the main aspect that we have to take into account to correctly identify our response to anxiety in deep spaces lies in the type of fear or fear that we experience.

How is the fear of batophobia?

The fear and fear experienced by people with batophobia has a number of characteristics.

In this way, not any experience of fear is valid to affirm the presence of this anxiety disorder.

First of all, we must bear in mind that in order to talk about batophobia, the fear experienced has to do with the specific situation of depth.

So, if fear does not appear in a specific way before a space in which the sensation of depth is interpreted in a clearly circumscribed way, we can not speak of batophobia.

In addition, in order to relate fear to depth with batophobia, this fear must have another set of characteristics.

The feared stimulus (depth) must not present sufficient demands to explain the individual’s anxiety reaction.

Thus, they argue that the fear experienced by the person with batophobia is totally disproportionate.

The situation or space that transmits depth does not represent any real danger to the individual but he interprets it as highly distressing, dangerous and harmful, and responds with an exaggeratedly high anxiety response.

The fear experienced is also totally irrational, since the individual reacts with high anxiety before a neutral situation that does not involve any danger.

In addition, the irrationality of the fear experienced is not only observable or identifiable by others, but the individual himself is able to interpret it as such.

The person with batophobia coincides in affirming that his phobia is totally illogical and he is not able to rationalize why he suffers it or what elements of the deep spaces cause him so much fear.

A clear component of uncontrollability must be added to the previous two points.

The person with batophobia is unable to control their anxiety response and when it appears it totally takes over both their emotions and their thoughts and behaviors.

The person with batophobia is incapable of supporting a situation in which a clear sense of depth manifests itself.

Thus, when the individual is in spaces such as tunnels or deep wells, he will try to escape as soon as possible to avoid his discomfort and the high anxiety response.

What are the symptoms of the anxiety response?

As we see, the fear that produces the depth to a person with batophobia generates a high anxiety response.

The anxious symptomatology of the disorder has a series of characteristics that define it, although it is subject to a certain variability and can be presented in different ways depending on each person.

In general, there is a clear predominance of the relative physical symptoms of anxiety, although the cognitive and behavioral components are also present and can play an important role.

The main symptoms of batophobia are:

As we have said, these are all the symptoms that a person with batophobia can experience when exposed to their feared stimulus, however, it does not always have to be presented by everyone.

In general, the most intense and distressing are the physical symptoms, which can appear automatically when the individual is exposed to a deep space.

Likewise, in some cases the anxiety response can appear simply with the imagination of deep spaces, without being necessary to expose oneself to one of these real situations.

To be able to identify the presence of batophobia, beyond what was previously mentioned, the following diagnostic criteria must be met.

Although below we specify the criteria for the diagnosis of batophobia in order to provide a better understanding of the disorder, the diagnosis of this psychopathology must always be made by a medical professional.

Finding the source of phobias is usually a complicated task, so if you try to find some element or experience when you were little that explains why you have batophobia, you probably will not get it.

In fact, it is considered that the batophobia does not have a unique origin and that the most usual thing is that it is the conjunction of a series of factors that gives rise to the disorder.

In some cases, a relationship can be observed between exposure to deep and traumatic situations during childhood and the development of batophobia during adulthood.

Likewise, in some cases, exposure to terrifying stories or visualizations about deep spaces can also play an important role in the development of batophobia.

However, in most cases no direct relationships are observed, which is why the participation of genetic factors is also supported.

In fact, as already mentioned, having caution or respect before deep spaces is a normal reaction.

All the people if we are, for example, in the sea and we can not see the total depth of the water, we can experience a certain amount of protection before that situation.

In batophobia, the individual replaces those feelings of caution or respect for a much more intense response, where the anxiety experienced acquires a clear phobic component.

The main treatment for batophobia consists in the realization of psychotherapy through a psychologist expert in this type of disorders.

In fact, psychotherapy has been shown as the most effective treatment to intervene phobias and get very good results.

If you have batophobia, you want to overcome your fears and go to a good psychologist, you will surely get results.

The psychological intervention that shows the greatest effectiveness in reversing batophobia is the cognitive behavioral treatment.

Thus, while other therapies can also provide positive aspects, when intervening this disorder it is advisable to go to a psychotherapist who performs this type of treatment.

It is a fundamental step to overcome the batophobia and involves exposing the patient to their phobic stimuli, that is, spaces with depth.

It has been shown how the avoidance of feared stimuli is the main factor that maintains anxiety responses, so exposing oneself in a guided and controlled way allows us to reduce panic experiences and overcome fears.

In those patients in whom exposure can not be done because the fear experienced is too intense, systematic desensitization is performed, an approach that will expose the patient little by little to their phobic stimuli.

They tend to be performed prior to the exposure in order to reduce the anxiety of the patient and provide a state of tranquility that facilitates the approach to the phobic stimulus.

In cases where there are strong negative thoughts and beliefs about the feared stimulus, cognitive therapy is used to modulate them and ensure that they do not interfere with the individual’s daily life.