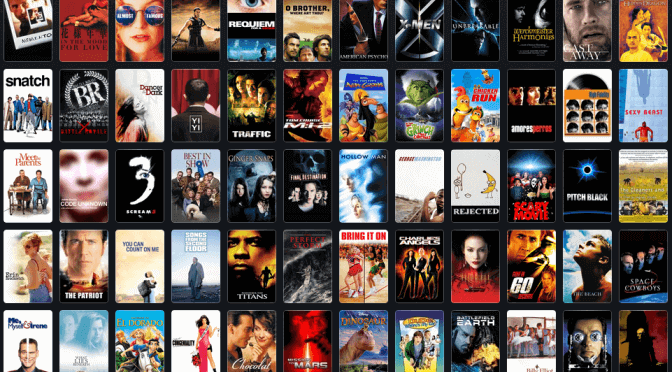 Thanks to this list of movies from the world of drugs  you will be able to approach them: how addictions appear, what types of drugs exist, how they feel those who consume them and what consequences may come later.

Drugs have the power to change what people feel, think and perceive of the outside world; coming to become a thrilling and pleasurable experience for some, while it can be a nightmare for others.

In fact, there are people dissatisfied with their life who will find in drugs a refuge, a way to escape from their reality. On the other hand, others use them as a means to experience new sensations and have fun.

The truth of all this, is that things do not usually end as well as they should. Normally when you get into an addiction problems begin to appear, and the situation can become a real drama.

If you are curious to know more about this topic, a good way to discover it is through the cinema. Would you be able to see them all?

It is a must-have movie if you want to know more about the topic of drugs. Directed by Darren Aronofsky, tells how a boy, his friend and his girlfriend are destined to misfortune by their increasingly strong addiction to heroin and other drugs.

At the same time, it shows us that not only illegal substances can also be drugs and destroy a person; Teaching us how the protagonist’s mother is obsessed with going out on television and becomes addicted to caffeine and weight loss pills of suspicious origin.

Exceptional film directed by Martin Scorsese. Henry Hill, a boy whose dream since childhood is to be a gangster; so he leaves school at 13 and goes on errands in the mafia. As time goes by, the confidence of the superiors is gained and they ascend, seeing themselves immersed in a world of crimes, violence and drugs.

Shocking German film based on a real case and directed by Uli Edel. It is about a girl of 12 years old fan of the music of David Bowie, who by social pressure ends up injecting heroin and becoming addicted. Throughout the film shows the darkest side of this drug, capturing what she and her friends have to do to get their dose.

It is an essential film by Danny Boyle, another of the essentials. It tells the hard adventures of a group of young people addicted to heroin, whose lives are totally focused to get money and be placed; without having other goals or objectives. It is a film full of metaphors about life that will make you reflect.

It is directed by Ted Demme and stars Johnny Depp and Penelope Cruz. It tells how George Jung, a boy who starts selling marijuana on the beaches of California in the 70s.

Little by little he ends up increasing his business, to the point of working for Pablo Escobar as a cocaine dealer. He comes to produce an immense fortune, but his addiction will sink him into failure.

It is a fundamental gangster film directed by Brian De Palma, having one of the best ratings in Filmaffinity.

Tony Montana (Al Pacino) is a criminal of strong character, cold and implacable; who takes refuge in the United States with the aim of becoming the most prestigious and rich gangster. Accompanied by his friend Manny Rivera, he will begin to traffic cocaine to achieve his goal.

From director Terry Gilliam, it can be considered one of the quintessential films about drugs. It is about a journalist and his lawyer who are heading to Las Vegas through the desert. For this use a red convertible whose trunk is full of drugs of all kinds.

Under the effects of drugs will go crazy adventures, appearing in full detail the symptoms that produces them.

One of the legends that has promulgated this film is the drug “adrenochrome”, supposedly extracted from the human adrenal glands.

Stimulating film by Gaspar Noé that will immerse you in the effect of drugs, telling the life in Tokyo of a drug trafficker and his sister, who works as a stripper.

It begins when a confused night, the police shoot the protagonist while trying to hide. From then on, the story of the protagonists is told, showing the union of two brothers who have gone through a difficult life.

Drama directed by Joshua Marston, shows in a realistic and crude way, the experiences of the “mules” or people who transport drugs in their body. Maria, the protagonist, is tired of her work and her life, when a man appears who coaxes her to work for him as a mule, promising a large sum of money if she manages to make only one transport. This money could completely change Maria’s life, which makes her take the risky decision.

It’s a movie about love and addiction, which makes us see how drugs captivate you and take you to the abyss. It is about the relationship between Dan, who is a poet, and Candy, a girl who studies art. Both embark on a romantic and bohemian relationship dyed by the heroine, which goes through different phases (Heaven, Earth and Hell) and where the protagonists will not stop fighting to try to save their love.

It is a heartbreaking Colombian film directed by Víctor Gaviria, which reflects the lives of children addicted to glue in a criminal neighborhood of Medellín. The protagonist is a 13-year-old girl who sells roses in an environment populated by violence, drugs and prostitution.

It is a film based on real events, directed by Michael Cristofer. Angelina Jolie makes the model Gia Marie Carangi, who rises to success for its beauty and sensuality. However, her dissatisfaction at work and her failure to try to make her makeup artist fall in love causes her to experiment with drugs, beginning to sink into failure.

Pedro Almodóvar always surprises us with his controversial stories. In this case, it reflects the life of Gloria, a frustrated housewife who is addicted to amphetamines to escape from her boring life.

The full movie covers 3 different stories that take place in Scotland. “The cause of Granton Star”, is a comedy that deals with topics such as revenge, religion and football. “A soft uncle”, who tells the failures of a manipulable and weak boy; and “The Acid House”, where you can enter the world of LSD.

American film directed by Ken Russell, which deals with a scientist interested in discovering other states of consciousness called Eddie Jessup. He, while studying schizophrenia, realizes that there may be other states as real as vigil. In this way, he starts experimenting with his colleagues, depriving his body of stimulation and consuming hallucinogens. But such experiments end up having unexpected effects that will not prevent Eddie from stopping his investigation.

It is a science fiction movie that makes us see what the world would be like if there were a revolutionary drug that would increase our cognitive capacity without limits. In this way, Eddie, the protagonist, when he consumes the drug can remember in detail everything he has read, seen or heard, even just once.

Directed by Roger Corman and written by Jack Nicholson, it is the first film that shows LSD consumption as the main theme. It’s Paul Groves, who after losing his wife enters a serious crisis. However, your friend offers you to try LSD to help you forget.

The first story is about Ronna, a supermarket cashier who has economic problems and who, during that night, will offer her a more profitable job. The second story is starring Simon, a partner of Ronna who will spend a crazy night in Las Vegas with his friends. The last story is about the adventures of two (apparently) friends, Adam and Zack, who have problems with drug possession.

It is a controversial and shocking drama that narrates the day to day of young people in New York, fully advanced for their age filling their lives with sex, drugs and alcohol. It aims to reflect the problems of the society of the United States in the 90s.

This film by Justin Kerrigan, tells the life of two couples and their camel, in which throughout the week lead a seemingly normal life, with their routine and boring jobs. In reality, they go through a series of difficulties that they try to avoid during the weekend, when they immerse themselves in the world of drugs.

It is a Brazilian film based on real events by Fernando Meirelles and Kátia Lund, with an excellent rating by Filmaffinity users. Reflects life in a suburb of Rio de Janeiro, from the 60s to the 80s, a period undermined by violence and drug trafficking.

The protagonist is Buscapé, a sensitive child who is very clear about his goal in life: not to get carried away by the horrible fate to which most children of his age are condemned and to fight to become a photographer if he survives.

Excellent film by Martin Scorsese, based on the life of Jordan Belfort (played by Leonardo DiCaprio), a New York stockbroker who, due to ambition and fortune, achieved success and let himself be carried away by drugs, power, women. The desire to get more and more begins to bring problems.

It is an independent film comedy directed by Jonas Åkerlund. It is about a drug addict named Ross, who works as a chauffeur and messenger for his camel, a man who makes methamphetamine in his house.

It’s a meal by David Gordon Green, whose protagonist is Dale Denton, a court clerk who assiduously consumes marijuana. One day, his camel offers him a new type of marijuana called “Pineapple Express” that he only sells. The problems come when Dale, witnessing a murder, accidentally leaves the Pineapple Express cigarette butt at the scene of the crime.

It is an American film by David Veloz, which reflects the life of a successful Hollywood screenwriter who apparently has everything anyone could want. However, what nobody knows is that he can spend $ 6,000 in heroin a week. For this reason, he is forced to enter a detoxification center where he will remember past moments of his life.