The postpartum depression is very common among women who have just become a mother syndrome, however not all symptoms experienced after  childbirth indicate that it is suffering a depression.

In this article we will review its characteristics, symptoms, causes and most effective treatments.

It is a disorder that is part of depressive disorders, which are quite frequent in the general population  (especially in women), and can occur at any time of life.

Also, as the name suggests, is a depressive disorder that can be moderate or severe, which occurs in women after giving birth.

However, the presentation of this depressive picture (or depression), does not have to occur immediately after delivery, but it can  occur from a few days after delivery, until a year after giving birth. Most times it usually appears about 3 months after the  birth of the child.

So if the symptoms appear after a few weeks of giving birth, it could be  postpartum depression.

It should be noted that this disorder causes suffering and discomfort both in the person who suffers it and in the  family, and affects the health of the newborn.

Thus, it is clear that PD is a severe depressive disorder that has the peculiarity of developing in women during the days or  weeks after the birth of their child.

Let’s go on time to see what are the typical symptoms of this disorder to have a little clearer what are their characteristics .

What symptoms are part of postpartum depression?

Like all depressive symptoms, PD is characterized by a large number of symptoms.

You probably already know which are the most characteristic symptoms of depression as feelings of sadness, crying or lack of interest in  things.

However, beyond the most popularly known, in the PD can present a wide variety of symptoms, which may be  of equal or even greater importance.

These symptoms are the following:

1. Sadness : it is the most frequent symptom. The woman with PD has a depressed mood and often feels miserable, unhappy and wanting  to cry permanently.

2. Changes in appetite: e s quite common appetite and food intake change significantly, either increasing or decreasing. This symptom is usually reflected in the  weight of the patient, which increases or decreases significantly.

3. Irritability and agitation: e l depressive symptoms often cause more irritable and agitated state of the woman in front of her husband, family, even newborn son.

4. Feelings of worthlessness or guilt: l you sad feelings are often accompanied by these feelings. The woman usually feels useless and guilty for suffering from depression and not being able to  take good care of her newborn child.

5. Lack of pleasure: c omo all depressive, this practically ubiquitous in all DP symptom. The patient with depression will be very difficult to  have interest or experience pleasure with anything.

7. Loss of energy and fatigue: l to depression causes a much higher than usual tiredness, with a noticeable loss of energy and difficulty performing any task, falling  well into inactivity (asthenia has similar symptoms).

8. Anxiety : u na woman with DP usually provides states anxiety manifested by a feeling of fear of not being able to care for their newborn, not  loving him enough or being unable to be alone with him.

9. Disconnection: l to postpartum depression often results in the sufferer some difficulty paying attention to the most relevant aspects of your life, and shows  off its context and focused on their concerns.

10. Loss of concentration: similarly, postpartum depression usually causes a marked loss of ability to concentrate on anything.

12. Problems to perform domestic or labor tasks:  postpartum depression is usually very disabling, so except for the milder cases, it is usual to incapacitate the person who suffers it to continue  working life, and in many cases to perform homework.

13. Inability to care for the baby or herself:  although it may seem strange that a mother is unable to care for her newborn baby, it should be noted that PD is a serious depressive disorder  , and as such can incapacitate the mother for Take charge of your child and even of yourself.

14. Negative feelings towards the baby:  the origin that identifies the mother as the cause of her depressive state is the birth of her child, so negative feelings towards the baby (although they  cause discomfort to the mother) are usually present during the episode. Even in the most serious cases, you may think about harming your baby. No  howevers these thoughts rarely materialize.

15. Puerperal psychosis: although not many, some extreme episodes of postpartum depression can be accompanied by psychosis. This psychosis is characterized by a loss of  contact with reality, strange ideas, confusion, agitation and lack of sleep.

These 15 symptoms are characteristic of postpartum depression, but this does not mean that if you suffer any of them you have to have it,  or that to suffer it you have to present them all. 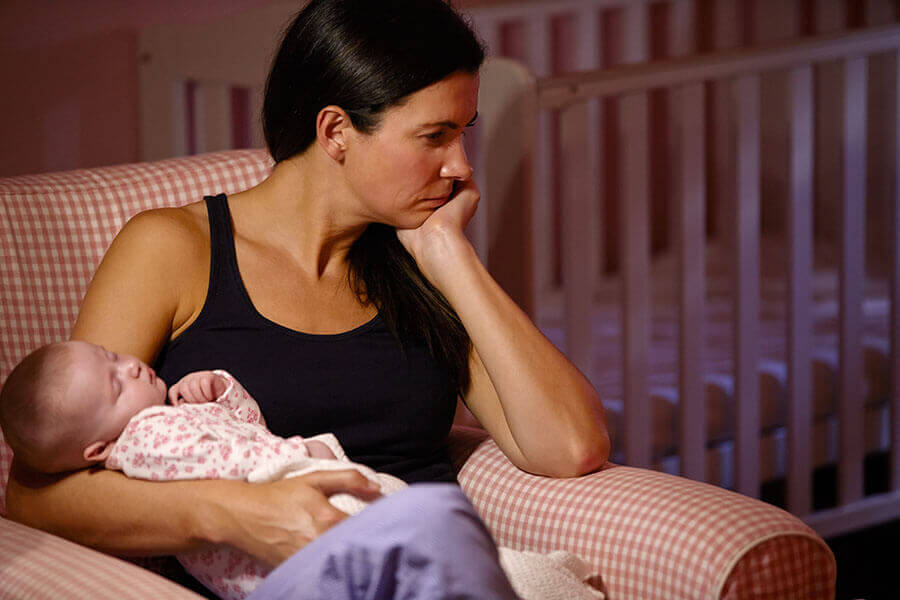 Let’s see where the diagnosis of postpartum depression is heading.

What is your diagnosis?

Postpartum depression is defined as the development of a major depressive episode during the first 4-6 weeks after delivery, although in  practice this episode may occur up to about one year after giving birth.

The clinical picture usually presented by women who suffer from it is the same as that which characterizes major depression, that is, PD  does not differ qualitatively from other depressive episodes that occur in contexts other than postpartum.

Therefore, in order to diagnose a PD, most of the following aspects must be presented during the weeks or months  following the delivery:

Although roughly these are the defining points of PD, this diagnosis must be scrupulously performed by a psychiatrist or  clinical psychologist, through a detailed exploration of the signs and symptoms in the context of a clinical interview.

How can I know if I have postpartum depression?

Although the diagnosis of a depressive disorder such as PD must be made by a clinical professional, during pregnancy and  childbirth, multiple changes occur in the body (hormonal, physical, psychological, etc.) naturally.

It enters into the expected, that this series of changes can produce diverse emotional variations, appearance of new feelings or presentation  of unusual thoughts; and these small alterations do not necessarily have to be interpreted as the beginning of a depression.

Given this situation, it would be convenient to @nalyze the changes you notice after delivery, and go to a medical professional when:

If I suffer postpartum depression am I a weirdo?

Admitting a PD after giving birth to your child is often a difficult and expensive task for all that it implies.

However, this disorder is quite common among women who have just become mothers in our population.

It is estimated that this disorder affects 13% of women after childbirth, and can affect up to 30% in teenage mothers.

At present, the causes that make up the appearance of PD are not known exactly.

However, many different factors have been detected that can affect the mood of the woman after giving birth. These are the  following:

There are a series of psychosocial components that can act as risk factors in PD. Having anxiety, depression or stressful events  during pregnancy can increase the risk of PD after the baby is born.

Likewise, having little social support during pregnancy or pre-pregnancy stages, or having had depressive episodes before pregnancy and  childbirth can also increase the risk of PD.

The regulation of certain hormones maintains a close link with PD disorder. Low levels of estrogen (which already  decrease with pregnancy) and progesterone, increase the possibility of developing PD.

Likewise, women with PD have high levels of glucocorticoids, and low levels of tryptophan and folic acid during  pregnancy.

Possessing very high expectations about childbirth can cause when the moment of giving birth comes, that perspective is disappointed, and creates  frustration in the mother.

Many cases of women with PD have experienced a birth with complications or traumatic, premature births of their children or  health problems in the newborn.

Often, motherhood is conceived as a time in which a woman must be radiant, vital and capable of performing all tasks perfectly.

Women who maintain this perception of motherhood and who once are a mother have difficulties when performing all the tasks  presented to them, may be more exposed to starting a postpartum depression picture.

The intervention of first choice for major depressive episodes is pharmacological treatment, usually administration of antidepressants.

However, despite the fact that antidepressants have more than shown efficacy in reversing depressive episodes, in postpartum depression the use of  drugs must be monitored very closely, due to the possibility of affecting the baby through breastfeeding.

Therefore, treatment with antidepressants in women with PD who are breastfeeding is ruled out, as it could be very harmful  for the newborn.

Regarding psychotherapy, interventions such as cognitive behavioral treatment, support for couples or interpersonal psychotherapy have  shown their effectiveness in PD, so it is recommended to complement pharmacological treatment with psychological therapy.