That is, a person suffering from binge eating disorder has an uncontrolled way of eating, which translates into a significant increase in weight.

The person with binge eating disorder loses control over their eating behavior and continues to consume large amounts of food despite not  feeling hungry or even feeling full.

Thus, the origin of this eating disorder lies in a psychological problem, since the person loses control of his behavior, and although  his body tells him that he no longer wants food, he continues to eat food in abundance.

If you have ever experienced an eating disorder closely, either in the first person or through family or friends, right now you are probably  asking a question …  Is this disorder called binge eating the same as the famous bulimia nervosa ? 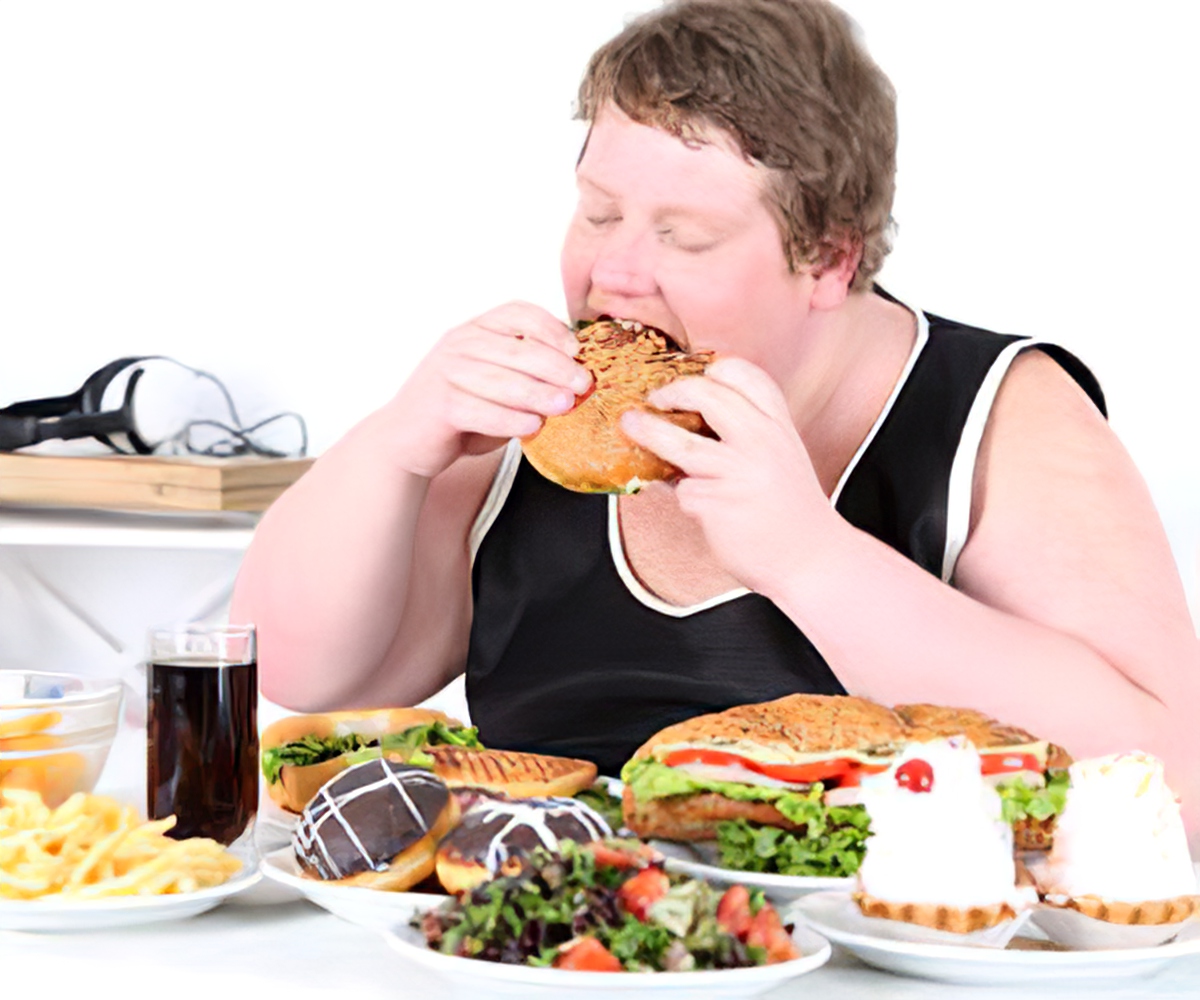 It is a very similar but different disorder since it is mainly differentiated by the absence of compensatory behaviors.

To put it another way: in bulimia nervosa, there are also episodes of binge eating, in which people eat excessively, with great anxiety and unable to  stop eating large amounts of food.

However, once the binge episode ends, guilt and anxiety appear for having carried out an unwanted behavior, since the objective of a  person suffering from bulimia is to reduce their weight due to the displeasure of their physique and their body image.

This guilt and anxiety for having eaten a lot causes the person to do compensatory behaviors, whether purgative, such as inducing vomiting or using  laxatives, or not purgatives, such as fasting or performing extreme exercise to lose weight.

As we have just mentioned, people suffering from binge eating disorder usually suffer from weight gain, which is why they are usually overweight  or obese.

However it is not always so. You can have a binge eating disorder and be at a normal weight.

Therefore, we will see what are the symptoms that best define binge eating disorder, and that if they occur, they are more than likely to be  suffering this problem.

Although the symptoms we have just discussed are typical of binge eating, how can we really know if a person suffers it or not?

And it is that presenting or having presented any of these symptoms does not have to lead to a binge eating disorder.

Sometimes we can present some binge episode in isolation, due to stress or personal problems, but not due to a psychological disorder.

For these symptoms to be part of a binge eating disorder, the following criteria must be met:

1- The recurrent episodes of binge eating are characterized by:

A. Eat in a period less than two hours, a quantity of food greater than that normally eaten by people in that same period (ie, greater than what would be a copious meal or a large dinner).

B. During binge eating, the person presents a total loss of control over their behavior: even if they want, they can not stop eating or control the food they eat.

2 – While binge happens, the person has a minimum of the following indicators of loss of control:

A. Eat until you feel extremely full

B. Eat a lot of food when you are not hungry.

C. Eat large amounts of food throughout the day, without planning what you eat or when you eat.

D. Eat in secret from others when they feel ashamed of their own eating behavior.

4- Binge eating is at least 2 times a week for a minimum of 6 months.

It is considered that people suffering from binge eating disorder are halfway between those who suffer bulimia nervosa and those who are obese.

They usually present high levels of dysphoria and psychological distress due to their problem, as well as a perfectionist, meticulous, controlling type of personality
with great concern to failure.

They tend to have a high predisposition to depression, so it is likely that they have previously suffered an episode of this type.

Likewise, it is also common to have panic attacks and anxiety.

They have an alteration in their body image, overestimating their weight and height, although in a much smaller way than what can happen in people with  anorexia or bulimia nervosa.

However, the fact that they usually present overweight or obesity, produces dissatisfaction with their physical appearance and an overestimation  of their obesity (they look fatter than they really are).

In addition to the psychological distress that this disorder in the person who suffers, can also cause serious health problems.

These alterations are usually caused by obesity and include, among others:

How many people suffer?

The prevalence data are confusing today, since a few years ago this disorder is known as a psychopathological entity,

However, the data currently available indicate that it is the most common eating disorder among the population of the entire planet.

Currently, it is reported that this disorder affects approximately 2% of the world population.

What is clear is that the prevalence of this disorder is very high among obese people, since more than 20% of people who are  obese also have binge eating disorder.

Thus, this disorder represents one of the greatest risk factors for obesity, since two out of ten obese people are due to  binge eating disorder.

Likewise, a greater prevalence of this problem has been identified in women than in men.

Currently, the specific cause of this disorder is not yet known, although it seems clear that there are several factors associated with its development.

Like other eating disorders, it seems clear that binge eating disorder results from the combination of both biological, psychological and environmental factors  .

Regarding the psychological aspect, it seems that there is a certain correlation between depression and the appearance of this disorder.

And is that almost half of people suffering from binge eating disorder, have or have had a depressive episode.

Similarly, symptoms such as sadness, anxiety, stress, or other feelings of personal discontent also seem to be closely  related to this eating disorder.

In addition, impulsivity and substance abuse seem to be factors that can act as precipitants of binge eating disorder.

All this would indicate that this disorder has a strong emotional component, so alterations of this type could favor its appearance.

However, an emotional disturbance does not explain much less the appearance of this disorder, there seem to be many more factors at play.

Nowadays, the linkage of certain genes with this pathology is being investigated, which would indicate that the binge disorder also contains a  hereditary component.

And it is that this psychopathology is more frequent among those people who have relatives who have already suffered it before.

Similarly, it seems that hormones such as serotonin may also be involved in its development.

Finally, with regard to environmental factors, it has been connoted that people who suffer from this disorder often come from families  with poor eating habits.

They tend to be families that eat too much and that place little emphasis on the importance of eating a healthy diet and lifestyle, and do not  value the nutritional component of food.

Thus, it seems that there is no single cause for this disorder, but that it originates due to the conjunction of psychological, genetic and environmental factors  .

Can it be prevented?

Although not all binge eating disorders can be prevented, the causes of this psychopathology that we have just mentioned indicate that we can perform  certain actions to try not to appear.

Therefore, receiving a good food education during childhood and adolescence, acquiring the value of nutrition and physical health,  seems to be an important factor to prevent it.

In the same way, stopping timely and adequately dealing with problems related to alterations in mood, self-esteem problems, or  other emotional problems, could also save us from ending up suffering from a binge eating disorder.

Binge eating disorder is a serious pathology so if you suffer it is very important that you receive the proper treatment and do everything possible to  try to redirect your eating behavior.

At a pharmacological level, medications such as desipramineand imipramine (tricyclic antidepressants) have been shown to be effective in  reducing the frequency and duration of binge eating.

The psychological treatment should be aimed at modifying and improving all areas of the person that do not work properly.

Therefore, work must be done to improve physical condition and reduce excess weight, through the establishment of adequate intake habits and  healthy physical activity.

In the same way, you should work directly on binge eating to ensure that they do not appear, and perform management strategies for anxiety and  impulsivity.

Finally, it is very likely necessary to perform a cognitive restructuring on the body image, so that it is no longer distorted, and  work to achieve an emotional stability that allows binges not to reappear.