The traumatic brain injury ( TBI ) or Traumatic brain inujury ( TBI ) is an impact in the brain which occurs due to an external force that can lead to decreased or altered level of consciousness, which in turn causes a decrease of cognitive and / or physical abilities (Portellano, 2005).

In other words, a TBI is any traumatism that occurs in the head, either superficial level affecting the scalp or  more serious, affected the skull and brain tissue (Ferrés Cuñado, 2016).

In addition, cranioencephalic trauma is one of the most common types of acquired brain damage. Specifically, in Spain and in other industrialized countries  , TBI is the leading cause of death in young adults (Jodar Vicente, 2013).

Injuries can occur when the head hits or is struck suddenly and violently with an object or surface, or when an object  pierces the cranial vault and accesses nerve tissue (National Institute of Neurological Disorders and Stroke, 2016).

Among the most common causes of TBI are traffic accidents, falls, accidents at work or violent attacks (Jodar  Vicente, 2013).

The signs and symptoms of traumatic brain injuries can vary in a continuum from mild, moderate or severe ,  depending on the extent of damage and nerve damage (National Institute of Neurological Disorders and Stroke, 2016). 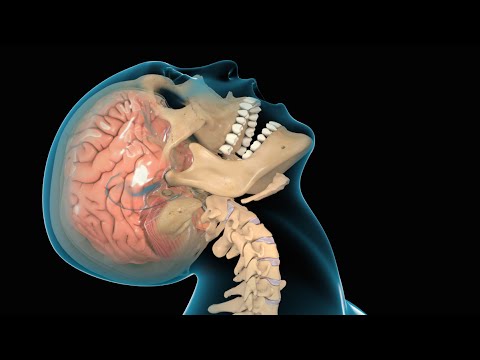 Therefore, the severity can vary from a light bruise or bruise, to severe bruising in brain areas. Specifically, the most common injuries  include: contusions, cranial fractures or scalp wounds (Reed-Guy, 2015).

The consequences and treatment of traumatic brain injuries vary enormously among different cases, since they depend both on the cause of  the injury and the severity of the injury (Reed-Guy, 2015).

When an object violently hits the skull, a wide variety of medical conditions can appear: headache, confusion, dizziness,  dizziness, blurred vision, fatigue, sleep, loss of consciousness and other neurological and cognitive symptoms (National Institute of Neurological Disorders and  Stroke, 2016).

Due mainly to the structural configuration of the skull, the TCE will cause damage both in the affected areas , that is,  those that receive the impact, and in others further awayas a result of the blow-counterattack effect (Pelegrín, Muñoz-Céspedez and  Quemada , 1997, Portellano, 2005).

On the other hand, traumatic brain injuries can be divided into two main groups:

In open cranioencephalic traumas, the skull suffers a fracture or penetration. In these cases, it is possible that the damage reaches the brain tissue  or fragments of bones are embedded (Ardila and Roselli, 2007).

In addition, when the encephalic mass is exposed to the outside, the risk of contracting an infection will increase “(Portellano, 2005).

In closed head injuries, brain injuries occur as a result of the mechanical effects of the traumatic event (Ardila  & Otrosky, 2012).

In this case, the skull does not suffer a fracture and a concussion or contusion of the encephalic mass occurs (Ardila & Otrosky, 2012) and generally  produces more diffuse neurological and cognitive effects (Portellano, 2005).

Traumatic brain injuries represent an important public health problem due to their frequency in the general population and the consequences  or consequences associated with them (Esper et al., 2010).

Of the serious cases, more than 99,000 people will suffer major sequels, so they may remain in a state of chronic disability  (Cleveland Clinic, 2014).

In the case of Spain, there are around 200 cases of traumatic accidents per 100,000 inhabitants each year. Within this high figure,  most cases (80%) will be considered mild, while 10% will be serious and another 10% moderate (Hospitals Nisa, 2016).

In addition, traumatic brain injuries are two or three times more frequent in men than in women, while the most affected age group is the  period from 15 to 24 years of age. However, after 60 years the risk also increases (Cleveland Clinic, 2014).

The most characteristic signs and symptoms in traumatic brain injuries are physical injuries to the head :

In addition, brain or nerve tissue damage may occur at the time of impact or develop later. Some of the physical injuries  resulting from traumatic brain injury are (Portellano, 2005):

In addition to these signs that are evident at the time of impact or trauma, traumatic brain injuries can have important  physical or neurological consequences. Although the clinical course is quite heterogeneous, a set of symptoms have been identified that appear  frequently immediately after the traumatic event or a few days later.

Specifically, depending on the severity of the traumatic injury we can distinguish various symptoms (Mayo Clinic, 2014):

Signs and symptoms related to mild head trauma may affect the physical, sensory and cognitive area.

b) Cognitive and neuropsychiatric symptoms

There are numerous events or conditions that can cause traumatic damage to the brain.

In addition, routine accidents and falls are another common cause, especially in people over  65 (Cleveland Clinic, 2014).

Other less frequent causes have also been identified, such as bullet wounds or the use of forceps during birth  (Ardila & Otrosky, 2012).

Systematically, the most common causes of TBI are (Mayo Clinic, 2015):

a) According to the type of injury:

– Open TCE : when a cranial nerve takes place and the brain tissue is exposed to the outside (Jodar Vicente, 2013).

– TBI closed : when there is no open lesion and the damage occurs secondarily the traumatic event (Jodar Vicente,  2013).

b) According to the location of the lesion

– Cranial: the lesions affect the inside of the skull, but do not involve other secondary cerebral level (Jodar Vicente,
2013).

– Epicranial: the lesions affect the outside of the skull (Jodar Vicente, 2013). Apart from these classifications, the most usual one in head injuries is the one that refers to the severity criterion:

The traumatic brain injuries are considered an urgent medical condition, so they are treated in medical services with special  priority.

The first diagnostic action used in TBI has to do with the determination of the level of awareness of the patient. The most commonly used scale  is the Glasgow Coma Scale (GCS), which offers an initial index of severity (Mayo Clinic, 2014).

On the other hand, all the information related to the traumatic event is collected: how it happened, where, initial symptoms, altered conscience, etc., (Mayo  Clinic, 2014).

The complications and sequelae will depend fundamentally on the severity of the traumatic event. In the mild type of TBI, they may present minimal sequelae  , however in the more serious, other more severe ones may appear: chronic coma, physical disability, deep cognitive deficits, etc. (Ardila and Roselli, 2007).

In any case, all those individuals who have just suffered a TBI should receive urgent medical attention.

The treatments used in the acute phase are aimed at controlling the immediate signs and symptoms of the traumatic event. It is essential to maintain  vital signs and control possible bleeding and fractures.

In addition to the use of pharmacological measures, in some cases it may be necessary to address medical complications through surgical procedures  to repair fractures, lacerations, bone incrustations, clot development, etc.

Also Read: What is love scientifically?

In the sub-acute phase, all therapeutic interventions will be oriented towards recovering the patient’s level of consciousness and the affected cognitive and physical areas  .