The dermatophobia is the irrational, extreme and unjustified fear of skin diseases and any type of injury that occurs in these regions.

This alteration, which is also known as dermatophobia or dermatophobia, is an unusual phobia. However, it can cause high rates of discomfort.

People with this disorder usually have very high anxiety rates. Likewise, it is common that the fear caused by the possibility of suffering from a cutaneous disease results in a behavior of constant evaluation of the state of the skin itself.

For this reason, dermatopatofobia is not a minor pathology. Their presence can greatly disable the functioning of the person and it is essential to treat it correctly. 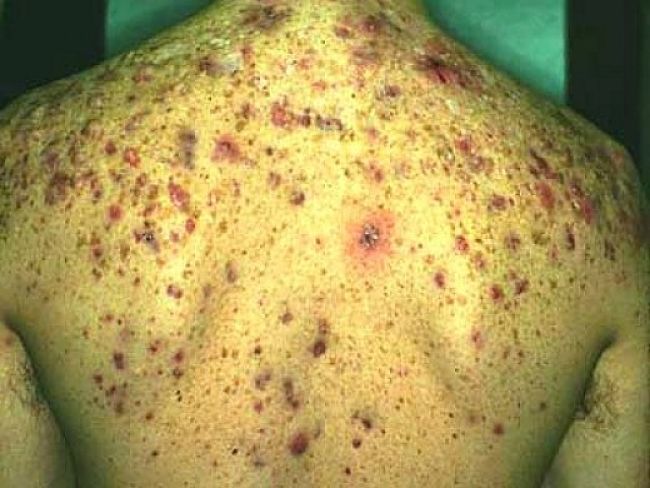 In this article the characteristics of this type of phobia will be explained. They will comment on its causes, what symptoms it causes and finally the most effective interventions for its treatment.

The dermatophobia is one of the multiple types that exist of specific phobia. In this way, it shares many characteristics with other well-known alterations such as spider phobia, heights or blood.

Specific phobia is a disorder characterized by the presence of clinically significant anxiety in response to exposure to specific objects or situations.

In this way, the main characteristic of dermatopatofobia consists of the appearance of anxiety before the exposure of a stimulus that indicates the presence of a disease in the skin.

Obviously, the detection of the feared stimuli of this disorder is somewhat more complex than that of others. In the phobia of spiders the element feared are spiders and in the phobia of blood the stimulus that causes anxiety is the blood itself.

However, defining what stimuli provide the idea of ​​having a disease on the skin is more complex. In fact, the interpretation of the stimulus is totally subjective, so these tend to vary in each subject.

A person with dermatopatofobia can interpret having very dry skin as an element that indicates the presence of a cutaneous pathology. On the other hand, another may think that the use of gel damages their skin and another subject may believe that having itching on the back is the symptom that predicts the presentation of the disease.

The usual thing is that each individual presents a large group of feared stimuli, which are associated with the probability of suffering from a skin disease. In addition, many studies have shown how these elements are not static, so that a person can be presenting more and more feared stimuli.

The main element that defines the dermatophobia is the experimentation of an extreme fear of cutaneous diseases.

This fear is defined as phobic and presents a series of characteristics that define it. Thus, not all fears of skin diseases configure the presence of dermatopatho- phobia.

The main characteristics that define the fear that is present in a person with dermatopatofobia are:

The fear that is experienced in the dermatophobia is totally disproportionate to the demands of the situation.

In this way, totally neutral stimuli often provoke extremely high anxiety responses. The elements feared in the dermatophobia are not real danger, but the individual interprets them as such.

In this way, real or justified probabilities of suffering from a skin disease or specific symptoms that indicate a bad state of the skin are not the elements that define the presence of dermatopatofobia.

The fact of fearing neutral stimuli, harmless and that do not cause any harm to the person is irrational.

However, the irrationality of dermatopathopobia goes further. Fear is not only irrational for others, it is also for the individual who suffers from the disorder.

Thus, the dermatopatofobia does not imply the presence of delirium, in which the person begins to interpret things in an unreal or extravagant way.

The individual with this type of specific phobia is fully capable of rationalizing his fear and realizing that this is irrational.

Although the individual is aware that his fear is irrational and, therefore, has no reason to present it, he continues to experience it immovably.

This fact is explained by another of the qualities of fear, uncontrollability. Fear is beyond the voluntary control of the person, so no matter how much they do not want to have it, they are unable to avoid it.

Besides being disproportionate, irrational and uncontrollable, the factor that best defines the fear of dermatopathopobia is its intensity.

The fear of different stimuli related to the possibility of suffering a skin disease is experienced with high intensity and maximum discomfort.

In this way, the very fear of conceiving a pathology of the skin modifies the behavior of the individual. He will try to avoid the situations and the feared elements by all means.

For example, if a subject fears a specific type of gel because it believes it will damage the skin, it will completely avoid its use. The same can happen with sun exposure or any other element that may be associated with having a skin disease.

An important characteristic of the dermatopatofobia is that the fear that is experienced is not transitory. In this way, the disorder persists over time and does not subside.

This fact highlights the need to treat psychopathology. If it is not intervened properly, a subject that presents dermatophobia will continue presenting it all his life.

The fear of multiple stimuli, notably unpredictable, which are associated with the probability of suffering from a skin disease can seriously affect the functionality of the individual.

The fear of the dermatopatofobia does not allow the subject to adapt well the environment, but quite the opposite. For this reason, it is classified as a maladaptive and pathological fear.

Finally, it should be noted that, as with the rest of specific phobias, dermatopathopobia is not a specific disorder of a certain stage or age.

It does not appear only in adulthood, in adolescence or childhood, but can originate in any of them and persist over time.

The symptomatology of this disorder is usually quite varied, so there is no single group of delimited manifestations that occur in all cases.

However, all the symptoms that are connoted in the dermatopatofobia are pertaining to anxiety. In this way, the manifestations respond to an increase of the activation, due to the direct effects of the fear that is experienced.

In general terms, the symptomatology can be grouped into three main areas: physical symptoms, cognitive symptoms and behavioral symptoms. Thus, this disorder affects the three great spheres of the human psyche.

When the subject with dermatopatofobia is exposed to one of its feared elements, it reacts with a clear response of anxiety.

The alterations of anxiety provoke in an irremovable way, a series of determined physical changes.

In the case of dermatopatofobia, these manifestations may vary slightly in each case. However, all of them respond to the increased activation of the central nervous system.

The physical symptomatology that can originate the dermatopatofobia is:

The physical symptomatology is not explained without the fear of cutaneous diseases. In other words, the fear of dermatopathopobia causes the body to become active, increase their anxiety and present some of the 10 symptoms mentioned above.

In this way, bodily manifestations appear as a function of the emergence of a series of thoughts.

These thoughts motivate the anxiety and at the same time they are fed with the physical symptoms, a factor that provokes a progressive increase of the nervousness and the feelings of anxiety.

The cognitive symptoms of dermatophobia can be very varied. The feared elements can be multiple and the association between these and the fear of suffering from a skin disease as well.

Thus, in dermatopatofobia a series of distorted thoughts are present, both with regard to the fear of conceiving a pathology of the skin and with respect to the feared stimuli that indicate this probability.

Finally, the intensity of the previous symptoms leads to a clear change in behavior. The person with dermatophobia will try to avoid the feared elements in order to also avoid physical and cognitive symptoms, which generate a high level of discomfort.

Thus, this alteration affects the normal behavior of the person. This will begin to be governed by their fears and may limit their functionality.

In addition, multiple studies have shown that the avoidance (or escape when it can not be avoided) of the situations and / or feared elements, is the main factor that aggravates and maintains the disorder.

The fact that the individual flee from his fears and is not able to face the elements he fears, causes the phobia not to recur and remain throughout the tempo.

The pathogenesis of specific phobias shows that there is no single cause that causes these disorders, but there are many factors that intervene or can intervene in their genesis.

With regard to dermatopatofobia, 5 different causes have been postulated that could play an important role.

The fact of having been exposed to situations that motivate fear of cutaneous diseases seems to be an important factor of dermatophobia.

Specifically, receiving educational styles during childhood that place a high emphasis on the dangerousness of skin diseases could be a factor related to the disorder.

Likewise, having suffered injuries in the skin regions or having experienced traumatic situations with the skin could also influence.

The conditioning of the fear of cutaneous diseases does not necessarily have to be acquired directly, but it can also be done vicariously.

In this sense, having visualized or observed unpleasant or impacting elements on alterations in the skin, could motivate the appearance of dermatopatofobia.

Finally, in the same vein as the previous two points, acquiring verbal information about the danger of cutaneous diseases can also contribute to the genesis of dermatophobia.

Some authors postulate the presence of genetic factors in dermatopathopobia. However, today there is still no clear data about the heritability of the disorder.

Unrealistic beliefs about self-harm, attentional biases towards threats or low perceptions of self-efficacy are cognitive factors that are associated with the genesis of dermatopathopobia.

However, there is a remarkable consensus in affirming that these factors have a more relevant role in the maintenance of phobias than in their origin.

Treating dermatophobia is essential to eradicate phobic fear, anxious symptoms and the disorder itself. In fact, if it is not properly intervened the alteration can be chronic and seriously affect the person.

The intervention of first choice for this psychopathology is psychological treatment. Specifically, cognitive-behavioral treatment has shown very high efficacy rates for dermatopathopobia.

In these treatments, systematic desensitization is usually used, in which the subject is exposed to his feared elements in a progressive manner, with the aim that he will get used to them.