The development of language in children has become a central point in studies on neurocognitive development. Despite being a complex function and presenting a slow acquisition, the child’s linguistic potential becomes evident from early stages of development.

The language is a system that we use to interactively interact with others through the use of sounds, symbols and words. Through it we try to express contents, meanings, ideas or thoughts (Jhonson and Hann, 2015).

Development of Language in Children

Different specialists in the linguistic area maintain that there is a clear relationship between the development of these skills and the early experiences and abilities of perception of speech and speech to which the babies are exposed from birth, and they will also constitute the bases for the development Subsequent complex linguistic functions (Jhonson and Hann, 2015).

In the stage that includes the period from 12 to 24 months, children begin to produce their first words referring to the naming of objects, while the sentences begin to occur around 18 months. From this moment, these phrases begin to evolve gradually, acquiring a greater complexity to achieve an efficient communication (Roselli et al., 2010).

Although the linguistic domain is directly related to brain maturation and the acquisition of other types of skills, such as motor skills, and is also acquired in a progressive way, different studies show that infants as young as 6 Months of age can successfully discriminate the speech sounds of speeches issued in their native language as well as in a different one. They consistently show how babies are able to detect the linguistic spectrum of any language .

In this area, Dr. Patricia Khul , director of the Institute of Brain and Learning Sciences at the University of Washington, has played an important role in research on language and early brain development. His different works have shown the implications of critical periods in language acquisition, bilingual education or learning to read.

Thus, in his lecture ” The Linguistic genius of babies “, he shows extraordinary evidence about the way in which babies learn language, how they “take statistics” about the sounds that will be necessary for the production of their language.

In his presentation he begins by talking about the critical periods of Learning . We understand this concept as a limited time period, during which children are able to incorporate new learning and skills into their cognitive or behavioral repertoire. That is, it is a sensitive period for learning.

The existence of this critical period in language learning explains the fact that children and babies are “geniuses” in learning a second language until about seven years of age. From birth until approximately the stage between 3 and 7 years of age, the learning capacity of a second language is maximum. However, from this moment begins a systematic decline in this ability.

The native or native language is acquired during the childhood stage, while generally, the second language can be acquired both in childhood and in adulthood. However, it is the children who have greater advantages for its acquisition, due to the great plasticity that presents its developing brain that, in many cases, allows them to acquire a large amount of information of a simple or complex type in an unconscious way and with hardly any effort (Navarro-Romero, 2009).

Different investigations point to puberty as the critical stage from which the learning of a second language becomes more complex. Because of this, adults will find it more difficult to reach an expert or native level in a second language, as a result of the reduction of the cerebral plastic properties. (Navarro-Romero, 2009).

The main objective of the laboratory led by Dr. Khul is to find a general model of language acquisition and critical periods that take place in social, emotional and cognitive development. In this way, they have focused their research on the critical period of mastering the sounds used in the native language.

An experiment was carried out, in which different sounds of all languages ​​were used in different parts of the world. The baby had to sit in his mother’s lap and undergo a training phase in which he had to turn his head discriminating a change of sound, for example: from “ah” to “ih”. If they discriminated this change correctly, the response was reinforced by the appearance of a toy.

This experiment showed how babies are able to discriminate the sounds of all languages , regardless of their country of origin.

Babies behave like ” Citizens of the world “, however adults do not show this capacity, we are listeners dependent on culture, that is, we discriminate the sounds of the language we dominate.

From these results he derived another important question: At what point do we stop being able to discriminate the sounds of all languages ​​and become culturally dependent listeners? .

We fly listeners dependent on culture approximately before the first year of life .

This response was obtained through a second experiment. This was done with babies living in Tokyo and the US, measured the heads of babies before listening to the sounds “ra” and “la”, relevant in English but not in Japanese. 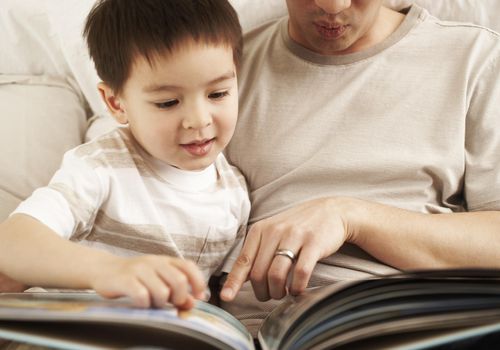 The results showed that, in the period from 6 to eight months, the responses of the babies are equivalent, that is, they are able to discriminate the sounds independently of their place of origin.

However, two months later (10 months old), the American babies show an increase in their responses to these sounds and the Japanese decrease. This may indicate that babies are specializing in listening to relevant sounds of the language they are going to learn.

Dr. Khul tries to explain these results in the following way: babies as they listen to a “Take statistics” speech. The statistics of English and Japanese are very different. English has many RL and Japanese distribution is totally different. Where there is a larger group of intermediate sounds. Therefore, babies through their statistical study are able to detect these differences.

Babies @nalyze these statistics and begin to specialize in the most relevant sounds. They absorb the statistics of the language and that changes their brains and transforms them into listeners dependent on the culture.

As distributions stabilize, learning slows down. Adults, we no longer unconsciously absorb those statistics.

However, Dr. Khul argues that in the case of bilinguals, they must have two parallel groups of statistics, which alternate with each other depending on the language of the speech. This was proven, through a new experiment.

When the test is done in monolinguals in Japanese and US children with the sounds of mandarin they show the same pattern. Between 6-8 months, they are totally equivalent. Two months later (10-12 months). Taiwanese babies progress while the US does not. However, if American babies are exposed to Mandarin for 12 sessions (during the critical period, up to 8 months of age) they reach the same level of sound discrimination as Taiwanese babies (exposed to Mandarin for 10 months and a half ). This shows that babies begin to extract statistics from the new language to which they are exposed.

The role of social interaction

In addition, we also tried to study the role of social interaction in language learning .

Patricia Kuhl carried out two experiments for the importance of this interaction in the acquisition of a language (Navarro-Romero, 2009). In these, babies were exposed directly to native speakers using stories and toys and other groups, was exposed to the language through an audiovisual medium, in this case, movies. In the first, Kuhl worked with a group of children who, in a certain number of sessions, played with native speakers using toys or stories. Navarro-Romero, 2009).

The results showed that the group of babies exposed to the language through audiovisual techniques did not show any learning. From this we can draw a clear conclusion: Direct social interaction is essential for babies to absorb the statistics of the language to which they are exposed.

In general, the results and conclusions presented by Dr. Khul show how there is a critical period of language learning. From birth to approximately three years of age, our ability to assimilate a second language is maximum.

Also Read: What is Primary Narcicism?

This conclusion has important educational implications for the learning of other languages ​​and for the establishment of the ideal moment of exposure to them. On the other hand, it also points out the need for direct social communicative interaction for the incorporation of language-based learning.