The emetophobia is an irrational fear associated with vomiting. It includes extreme terror to vomit oneself, to see another person vomiting, the fear of feeling nauseous or the irrational fear to see the vomit.

People with emetophobia vomit very rarely in their lives. There are older adults, young adults, adolescents and even children with emetophobia. They are usually very anxious people, who when they see that a person feels bad, cough or choke, they wonder permanently if it will vomit or not.

The anxiety that causes them this situation causes them to flee the place, and if they cannot do so, they may suffer a panic attack.

While there seems to be no specific cause for this disorder, some people with emetophobia claim to have had a traumatic experience  related to vomiting, for example, gastroenteritis , food poisoning, or involuntarily witnessing someone else’s vomiting. 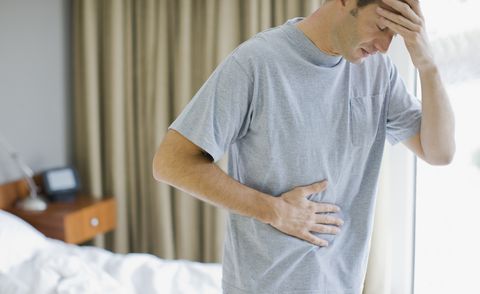 rom this episode, which usually occurs in childhood, begin to associate very negative emotions with the fact of vomiting and is when emetophobia begins to appear.

On the other hand, some people with emetophobia fail to distinguish any traumatic event that might be the cause of their fear.

Many people with emetophobia also have other disorders, such as social anxiety, agoraphobia and fear of flying, because their greatest terror is exposing themselves to situations in which they could vomit, in private or in public.

Then, these people will surely avoid going to a restaurant, drinking alcohol and even attending all kinds of social events. They are probably also afraid to get on a bus, especially if there are children who could vomit.

In this way, traveling on public transport or by plane is something really frightening for a severe emetophobic.

Some women avoid getting pregnant, for fear of nausea and vomiting that may appear in the first trimester.

Many people with emetophobia also take extreme care in preparing the foods they are going to eat. They are not able to eat anything, anywhere, which can also be a complication to everyday life.

Imagine that you were not able to spend a little time with a baby for fear of vomiting, or that you cannot travel by bus or plane or eat in a restaurant. Anxiety and fear of vomiting can actually paralyze your life.

The cycle of emetophobia

Like all other phobias, the fear of everything related to vomiting fulfills a cycle that could be summarized as: thought-reaction-action or avoidance.

For example, if you have emetophobia, the first thing that happens before the symptoms start (anxiety, sweating, tachycardia, feeling fearful, wanting to flee), is something that reminds you of vomiting. Someone mentions it directly or indirectly, you see it on TV or someone simply comments that you are pregnant or that you will receive chemotherapy sessions.

Then, a thought about vomiting passes quickly through your mind. This can be a conscious or unconscious phenomenon. Then you probably look for yourself in the urge to vomit, notice how your stomach feels, or clear your throat to see that you do not feel nauseous. Or maybe you’re looking at other people for signs that they might vomit.

And then, fear appears. And with it, the symptoms, which can be mild, moderate or severe. You feel terror, you sweat your hands, your heart accelerates, and you feel like running away. To escape your fear of vomiting you may skip a meal, or leave work earlier.

Other avoidance behaviors caused by emetophobia can be: avoid going to the bathroom (you fear that simply seeing the toilet makes you vomit), avoid  eating in restaurants, you have extreme (and unnecessary) care with the food you eat, you are terrified of the idea that an infection in your  digestive system can make you vomit.

And this is how these behaviors of chronic avoidance, triggered by fearful anticipation, are being established. When a thought related to vomiting recurs in your mind, the cycle begins again.

Despite the systematic avoidance of everyday situations because of the fear of vomiting, some people with emetophobia have managed to live with this fear for many years, until there comes a time when fear becomes less manageable. At that time is when some people decide to consult a specialist in search of an effective treatment.

Of course, if a person has an irrational fear of vomiting, it is logical that he is afraid of eating food that could cause them to vomit. That is why some emetophobic people eat very little and may also suffer from anorexia.

They prepare their food with extreme caution, since they are afraid of becoming infected with a virus or bacteria. He is also afraid of eating too much and then vomiting, so they only eat very small portions. Over time these fears can lead to anorexia nervosa.

If you suffer some degree of emetophobia, you do not have to deal with this problem for the rest of your life. Symptoms can be relieved a lot with proper treatment.

In the page of the most important emetophobic association of the United States it is pointed out that the standard treatment for this fear is cognitive behavioral therapy, which is not surprising, since this therapy is usually useful for the treatment of most phobias.

The therapist must work on the irrational fears of the patient with great patience and caution, without ever minimizing the suffering that transforms the emetophobic, due to his intense fear.

The therapy will help the patient to control their anxiety when presenting stimuli, and to change the irrational negative thoughts they have at that moment by others, more rational and positive.

Gradual exposure therapy may also be helpful. Write up the vomit first, then expose yourself slowly to images of people vomiting or acting as if vomiting, or to unpleasant odors can be an example. It is not a good idea to force the patient to vomit to eliminate their fear; in general they do not obtain good results.

All relaxation techniques that may be helpful in controlling anxiety, such as yoga, breathing exercises, progressive muscle relaxation, even meditation, can have a good effect on people with emetophobia (or any other phobia).

In the most extreme cases, anxiolytic medication can help, and a lot. If the patient has a condition other than the vomiting phobia, such as agoraphobia, obsessive compulsive disorder, or others, the psychiatrist will probably prescribe medications that may also help control emetophobia.

It is also a good thing to keep in mind that a person with severe emetophobia will not be cured with a few sessions of psychotherapy. The treatment can be quite long, but if you commit to following it, you will probably get good results in the medium or long term.

As you can see, emetophobia can be reversed. If you have an irrational fear to vomit and terror prevents you from leading a normal life, and then seeks psychological or psychiatric help, you can overcome that fear, be sure, but you must have professional support, especially if your symptoms are severe.

Emetophobia is a disorder more frequent than you thinks, it can happen to anyone. Look for example in what counts this emetophobic boy of 21 years:

“Emetophobia has come to make me feel as if I have a serious illness. Phobias can ruin your life. The worst thing about emetophobia is that you are not only afraid to return your breakfast, but that you have the constant fear that someone else can do it near you.

All this began when I was about seven years old. I jumped with my sister on the couch, when suddenly I felt a strong desire to vomit. I went to the kitchen and dumped everything. I wanted to do it in the trash can, but I did not get there.

My mother took me to the bathroom, and vomited three more times. The next day, when I ate breakfast I felt nauseous, but I managed to avoid vomiting. From there began to invade the emetophobia. I was terrified of anything that had to do with vomiting, much more than what would be considered normal.

What scares me the most is the lack of control we have over the act of vomiting. When the stomach decides to do it, it is almost inevitable, also often unexpected and causes the disgust of those around you, even if they are your friends or family.

Many times I avoided school trips or trips, for fear of vomiting. “

Here’s another story, this time it’s a girl with emetophobia, maybe you identify with her case.

When Wendy was three years old or so, her mother was pregnant with her younger sister. One night tomorrow he heard his mother scream and cry in the bathroom. He went to see what was happening, and saw his mother vomiting without stopping, while his father tried to help him without being able to do anything.

Her mother moaned at how bad she felt, inconsolable, and said “I want to die.” When her dad noticed Wendy’s presence at the bathroom door, he led her back to her room, where the child stayed for a while longer listening to her mother’s wailing and nausea.

From there began his fear of vomiting. Unwittingly, he associated the fear of death (of his mother) with nausea and vomiting; this fear accompanied her for many years and was getting worse over time.

So much so, that he was not even able to utter the word “vomit.” When someone was coughing or choking on food near her, she was running out of panic. When he stopped, sometimes he could not remember the reason why he had suddenly run out.

When these behaviors began to prevent Wendy from leading a normal life, she consulted a psychotherapist, who helped her control and avoid anxiety, reducing symptoms of emetophobia.

The case of an 8-year-old girl with emetophobia

The girl in this story was 8 when she suffered severe abdominal pain, high fever and vomited two or three times before the doctor diagnosed her with appendicitis and was operated on urgently.

Approximately 10 days after the operation, he began to be afraid of vomiting and that the episode would be repeated. He complained of nausea all day, although from the physical point of view, the doctors found no alterations.

Little by little the fear spread to their relatives, the girl feared that her mother or father vomited, and asked them not to travel by bus or use the elevator.

When her parents took her to the psychiatrist, he was diagnosed with emetophobia. It is important to note that both parents were suffering from anxiety disorders and taking medication.

The girl did psychotherapy and received medication to control anxiety. He also did gradual exposure therapy. In a few weeks, the symptoms of emetophobia disappeared completely, although the patient continued with the medication, mainly because of her family history.