The enochlophobia or demophobia  is an anxiety disorder characterized by the experimentation of an irrational, excessive and uncontrollable fear towards the crowds. Who suffers this alteration fears unjustifiably crowded spaces of people.

This fear provokes an anxiety response automatically, which causes a high level of discomfort for the person. The anxiety experienced in the enochlophobia is so high that it provokes behaviors of avoidance and escape to the individual.

This fact translates into that the person with this type of phobia, will avoid at all times be in situations where there are many people to save the high discomfort that causes.

The alterations caused by this disorder can seriously affect both the well-being and the functionality of the individual. Likewise, it can limit the performance of a large number of activities.

However, the best news of this alteration is that it has interventions that allow optimal recovery.

In the present article we will comment on the characteristics of enochlophobia, we will review what its symptoms are, what factors are related to its etiology and what intervention must be done to overcome it.

Enochlophobia is a fairly common type of known phobias. These disorders are characterized by the presentation of an excessive, irrational and unjustifiable fear towards a specific element.

In the case of enoclofobia, the element feared are the crowds, so the individual experiences high feelings of fear when exposed to situations with many people.

Attending the globalized world in which we live today, the crowds are a fairly common element.

There are many spaces in which large numbers of people can congregate. Likewise, in most events of interest it is practically impossible to attend without the company of many other people.

For all this, enoclofobia is a disorder that can seriously affect the life of the individual.

In the first place, it can limit its functionality a lot, since the person may not be able to attend or go through different places where large numbers of people are.

On the other hand, the individual with enochlophobia may often be unable to avoid crowds, which causes an immediate response of anxiety and high discomfort.

The symptoms of enochlophobia appear in response to the intense fear that the person presents about the crowds.

In this way, when the individual is faced with his feared stimulus (the multitude of person) he experiences a series of manifestations.

The symptoms that are present in this disorder are related to a clear increase in tension and nervousness of the subject. The person experiences a high fear that produces a clear anxious symptomatology.

The symptoms of anxiety can result from various gravities. The intensity of the manifestations of enoclofobia can vary in each individual and, above all, depending on the situation in which it is found.

In general, the larger the crowd, the fewer options the person has to escape from the situation and the less support they have at that moment, the more intense the symptoms will be.

Normally the manifestations of enochlophobia do not end up developing a panic attack. Although often the symptoms are very intense. 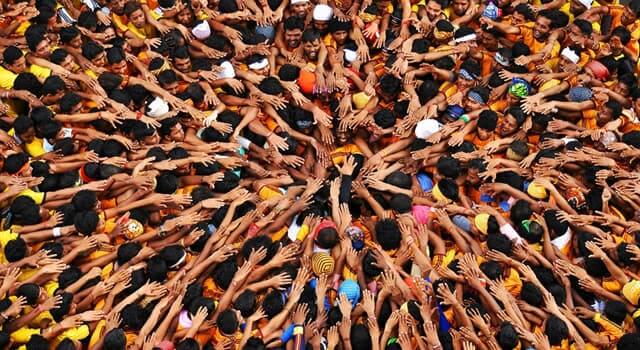 The first symptoms that a person with enochlophobia experiences when exposed to crowds are physical manifestations.

These manifestations constitute a series of physiological changes that occur in response to an increase in the alertness and anxiety of the person.

In the enochlophobia  these manifestations can be variable, but all of them refer to an increase in the activity of the central nervous system.

The increase of the cardiac rate and the respiratory rate are the most typical symptoms, being able to also experience tachycardia, palpitations or sensations of drowning.

Likewise, increased muscle tension, pupillary dilation and sweating are manifestations that can be experienced in many cases.

On the other hand, headaches and / or stomach pain can often occur as a response to increased body tension. Likewise, in the most severe cases, sensations of depersonalization and intense dizziness can be experienced.

The physical manifestations, which refer to a clear state of anxiety, are quickly interpreted and @nalyzed by the brain.

In this sense, in the enoclofobia appear a series of thoughts about the fear of crowds.

Cognitions such as the danger that many people are agglomerated in a specific site, the negative consequences that may entail and the need to escape to be safe are usually common.

Thoughts about the personal inability to survive in those situations also seem to play an important role in the pathology.

However, the cognitions that can appear in a person with enoclofobia are multiple and uncontrollable. Thought is governed by fear of the crowd so that any negative cognition about this situation can develop.

The fear that a person with enochlophobia presents directly affects their behavior and behaviors.

Obviously, the main behavioral symptom of this disorder lies in avoidance. That is to say, the individual with enoclofobia will try to avoid whenever he can that situation that he fears the most, the crowds.

Likewise, escape behaviors are often the most common behavioral responses among individuals with enoclofobia when they are immersed in a crowd.

The enochlophobia bears similarities with another anxiety disorder popularly known as agoraphobia.

In fact, agoraphobia has a much higher prevalence (almost 3%) than enochlophobia (less than 0.3%) in the global society.

Agoraphobia is a disorder that is defined by the appearance of anxiety to be in places or situations where escape can be difficult. Or in places where, in the case of suffering a crisis of unexpected distress, help may not be available.

Crowds and crowded places are obviously a place to escape can be more complicated than usual. In this way, it is one of the most feared situations in agoraphobia.

However, in spite of the fact that both in the enoclofobia and in the agoraphobia there can be an irrational and excessive fear towards the crowds, they do not constitute the same disorder.

The difference between both pathologies lies in the feared element. While in the enoclofobia only the crowded places are feared, in the agoraphobia the situations where escape is complicated are feared.

In agoraphobia, then, the dreaded spaces are not limited to crowds. Being in a subway or a bus (although this emptiness) can be a situation feared by someone with agoraphobia since escape is complicated. However it will not be for a person with enoclofobia, since it fears only the crowds.

Characteristics of fear of the crowds.

As we can see, the factor that causes the symptomatology of enochlophobia is the fear of a very specific element, the multitudes.

The crowded spaces of people constitute a habitual but at the same time very particular situation. In fact, despite the fact that certain people may like these places, it is evident that human beings require, in many moments, a specific physical space.

In this way, there are people who have a greater tolerance towards the crowds and individuals who feel more uncomfortable when surrounded by other people.

In any case, crowded spaces can be a relatively dangerous situation in some cases.

For all this, not all types of fears towards the crowds constitute a mental alteration. Or what is the same, not everyone who is afraid of the crowds presents enoclofobia.

So that the fear of crowded spaces can be considered as belonging to the enoclofobia, the following characteristics must be fulfilled.

The fear manifested in the enochlophobia is excessive in response to the demands of the situation.

In this way, experiencing fear when one is in the midst of a crowd of excessively large people, with avalanches or with some type of danger, does not constitute enoclofobia.

In the enoclofobia the crowd does not represent any real danger to the individual, but he experiences it as such.

The fear of enochlophobia can not be explained by reason. There is no congruent argument to explain the appearance of fear.

In fact, the person who suffers from enoclofobia is unable to explain why he fears the crowds and what elements make him afraid of them.

The fear is irrational but not for that the person who suffers it is able to control it.

Both the appearance and maintenance of this fear is beyond the control of the individual, so it appears automatically without it being able to do anything.

In order to associate fear with crowds with enochlophobia, it is imperative that fear provokes a clear avoidance of crowded situations.

In fact, if the individual is able to remain in the midst of crowds of people despite their fear, they most likely do not suffer from encopophobia.

The enoclofobia causes the avoidance and / or escape of the crowds invariably. And in the cases in which one remains in the feared situation, one experiences high feelings of discomfort.

The development of fears is a normal process for all humans. In fact, all people have the ability to experience these kinds of emotions.

Research on the etiology of specific phobias shows that conditioning plays a fundamental role in their development.

However, it has been demonstrated that there is no single cause of enoclofobia, which is why different factors can play a relevant role.

Having lived through traumatic experiences related to crowds or crowded spaces can play a major role in the development of enochlophobia.

These experiences can develop a clear fear of those situations that can become pathological.

In the same way, visualizing great catastrophes in crowded places of people, or negative events related to the crowds can condition the person’s experience of fear and contribute to the development of the phobia.

Although they are not very well studied, many authors defend the presence of genetic factors in specific phobias.

The heritability of these alterations is considered generalized in anxiety. So people with family members with anxiety disorders would be more likely to develop anxious disorders, including enochlophobia.

These elements seem to be especially related to the maintenance of the phobia and not so much in its genesis.

Unrealistic beliefs about the damage that could be received if exposed to the feared stimulus, attentional biases towards threats related to phobia, low perceptions of self-efficacy and exaggerated perception of danger seem to be key factors in the maintenance of enochlophobia.

Fortunately, today there are interventions that allow the recovery of specific phobias, including enochlophobia.

The intervention that has proved effective in achieving these objectives is the cognitive behavioral treatment. It is a type of psychotherapy that intervenes in both the cognitive and behavioral components of the person.

In this treatment the subject is exposed to its feared elements. As in the enoclofobia the element feared are the crowds it is often difficult to make a live exhibition. For this reason, exposure is often used in imagination and exposure through virtual reality.

Also Read: How to Apply Cognitive-Behavioral Therapy for Anxiety?

Through the exhibition, the person becomes accustomed to the crowds and overcome the fear towards them.