The fibromyalgia (FM) is a chronic disease characterized by the presence and development of tender points throughout the musculoskeletal system and also affects mostly women (Guinot et al., 2015).

People with fibromyalgia describe their medical condition as a situation of constant pain, with a significant increase in sensitivity at various points in the body and continuous physical fatigue (National Institute of Arthritis and Musculoskeletal and Skin Diseases, 2014).

Although its etiological causes are not known exactly, its pathological course has been related to a dysfunction of the nociceptive system, responsible for the processing of information related to pain (Ministry of Health, Social Policy, and Equality, 2011).

At the clinical level, episodes of pain are usually accompanied by fatigue and persistent fatigue, alterations related to sleep-wake cycles, headaches, intestinal and genitourinary pathologies or cognitive symptoms (Laroche, 2014).

In addition, this medical picture is a serious alteration of the quality of life, since it has a strong impact on work capacity, daily activities or social interactions (Guinot et al., 2015).

Regarding the diagnosis of fibromyalgia, it is essentially based on the identification of symptoms, based on the diagnostic criteria of the American College of Rheumatology. However, there is no diagnostic test that allows us to confirm their presence unequivocally (García, Martínez Nicolás and Saturno Hernández, 2016).

The treatment of fibromyalgia, like other chronic pains, requires a multidisciplinary approach, characterized by pharmacological-@nalgesic therapy, physical therapy and psychological therapy (Laroche, 2014).

Fibromyalgia (FM), is a chronic medical disorder that is characterized by the presence of generalized musculoskeletal pain at the body level, accompanied by fatigue, alteration of sleep patterns, cognitive and emotional deficits, among others (Mayo Clinic, 2015).

Specifically, the term fibromyalgia derives from the Latin term fibro, used to designate the fibrous organic tissue and the Greek terms mine, used to refer to muscle and again, to refer to pain (National Institute of Arthritis and Musculoskeletal and Skin Diseases, 2014). ).

The first inclusions of the term fibromyalgia in the medical literature, appear in 1975, from the hand of Dr. Kahler Hench, who uses it to refer to the presence of muscle-type pain without a clearly established organic origin (Institute of Cognitive Neurology, 2016).

However, it was not until 1990, when the clinical criteria for the classification of this medical entity were established, they were elaborated by the American College of Rheumatology (Institute of Cognitive Neurology, 2016).

Thus, fibromyalgia was considered a medical problem with a high prevalence, with a highly disabling course for people who suffer from it.

Apart from this, it is not until 1992 that all the international medical organizations and, in particular, the World Health Organization, recognize this medical entity as a disease (Institute of Cognitive Neurology, 2016).

Due to this, currently, fibromyalgia is a little-known pathology, with a poorly defined etiological origin and a complex therapeutic approach (García, Martínez Nicolás and Saturno Hernández, 2016).

In the case of the United States, fibromyalgia affects approximately 5 million people, with an age of 18 years or more. In addition, more than 80% of the cases diagnosed clinically have been performed on women (National Institute of Arthritis and Musculoskeletal and Skin Diseases, 2014).

Apart from this, fibromyalgia is a medical condition that can affect both sexes and at any age group, although several risk factors have been described associated with the increase in their probabilities of occurrence (National Institute of Arthritis and Musculoskeletal and Skin Diseases). , 2014).

On the other hand, in the Spanish population, fibromyalgia has an estimated prevalence of 2.3% in residents over 20 years of age, in addition, presenting a clear predominance in females, with a ratio of 21 to 1. In addition, in Regarding the age distribution, a prevalence peak around 40-49 years has been identified (Gelman et al., 2005).

Different specialists point out that fibromyalgia is defined by the presence of three symptoms or central medical events: episodes of pain, fatigue and generalized fatigue and, finally, alterations and disorders related to sleep (Guinot et al., 2015).

In addition, to this basic symptomatic set, other findings are usually added, among which are included: cognitive alterations or digestive, urogynecological or otorhinolaryngological pathologies  (Guinot et al., 2015).

Therefore, the clinical course of fibromyalgia is characterized by diffuse involvement with the presence of various symptomatological events (Guinot et  al., 2015, Mayo Clinic, 2016, National Institute of Arthritis and Musculoskeletal and Skin Diseases, 2014):

The sensations of pain usually affect the muscular, articular, tendinous regions or show a neurological character. In addition, it is usually generalized, that is, it affects both corporal sides and the upper and lower waist areas.

Affected people often define pain as a sensation of palpitation, pressure, burning or puncture, located in a specific body area.

Regarding its course, it usually presents a conical and persistent character, accompanied by a sudden or progressive onset, associated, in most cases, with a traumatic event (physical or psychological) or a preexisting pathology related to painful symptoms.

Generally, the pain tends to get worse after performing some motor activity or physical effort. In addition, it is usually much more intense during the morning or during the night, as a result of the development of significant muscular rigidity in the resting state.

The asthenia, ie, persistent fatigue or general weakness, is one of the most common symptoms of fibromyalgia, is present in over 90%  of diagnosed cases.

The inactivity or recurrent fatigue, are usually present since the affected person wakes up, although it can improve during the day, they have to appear in a short period of time.

In addition, asthenia tends to worsen with physical activity, psychological and/or emotional stress, therefore, is an important source of functional limitation. 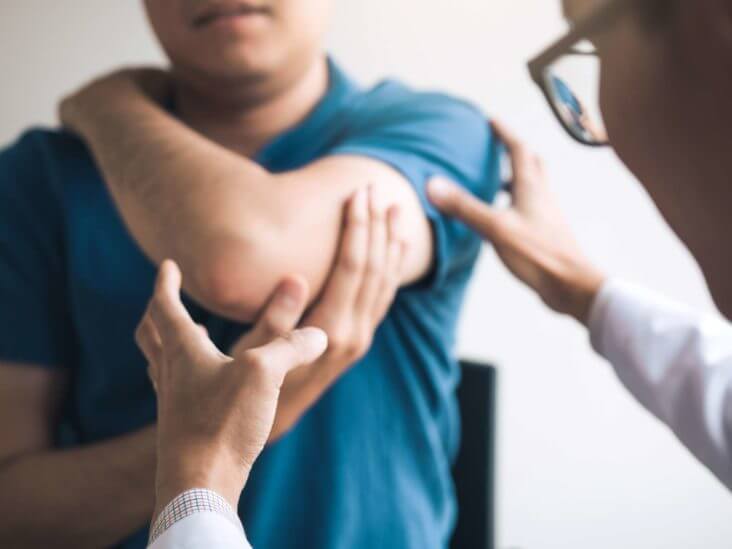 Both pain and persistent fatigue contribute to the development of alterations related to sleep-wake cycles. Thus, sleep disorders are widespread in people affected by fibromyalgia, usually characterized by episodes of unrefreshing sleep,  constant awakening or difficulty reconciling.

Although affected people usually have long periods of sleep, in most cases, these cycles are interrupted by the presence of localized pain, episodes of sleep apnea or due to the condition of restless legs syndrome.

In addition to the alterations described above, many of those affected may present other types of symptoms related to the sensory, cognitive, digestive or genitourinary sphere.

In the case of the cognitive area, there is usually a marked difficulty in maintaining concentration, alternating attention or performing tasks that require a high mental effort.

In most of the cases, this is due to the disruptive nature of pain and the presence of headaches and persistent headache.

As for the sensory area, affected people may present episodes of cramping or sharp sensations in body areas, especially in the abdominals. In addition, paresthesia may develop in most cases.

Generally, the clinical course is characterized by the development of an increased sensitivity to pain, that is, of hyperalgesia, accompanied by some auditory symptoms, fundamentally related to the threshold of sounds and noises.

As we have pointed out, the specific causes of fibromyalgia are not yet known exactly. Despite this, a good part of the clinical and experimental investigations have linked their clinical course with a dysfunction or malfunctioning of the nociceptive system (Ministry of Health,  Social Policy, and Equality, 2011).

The nociceptive system is responsible for the perception, processing and regulation of stimuli related to pain.

Specifically, the nociceptive system has the essential function of detecting potential threats, through the modulation of painful stimuli and,  therefore, through the activation of the various alert and stress mechanisms and, consequently, the physiological responses (Ministry of Health, Social Policy and Equality, 2011).

This system is capable of detecting stimuli of an auditory, mechanical, psychological, electrical or thermal character. However, it is hypothesized that in people suffering from fibromyalgia, there is a dysfunction that decreases the minimum threshold of stimulation necessary to transfer a harmful stimulus as a  possible threat and thus generate a defensive response (Ministry of Health, Social Policy, and Equality, 2011).

On the other hand, a poor functioning of the hypothalamic-pituitary-adrenal axis has also been proposed as responsible for the development of fibromyalgia. This axis is considered the center of a stress response, that is, it is responsible for the production of hormone regulation that controls our responses to stress situations (Instituto de Neurología Cognitiva, 2016).

In the case of people suffering from fibromyalgia, this axis could present an anomalous functioning, characterized by a hyperproduction of two hormones ( cortisol and adrenocorticotropin ) that would increase the perception of pain (Instituto de Neurología Cognitiva, 2016).

However, all these postulates are still in the experimental phase, so there are no clear conclusions about the etiology of fibromyalgia.

Despite this, at the clinical level, it has been possible to associate the development of fibromyalgia with different factors and events, among which are  National Institute of Arthritis and Musculoskeletal and Skin Diseases, 2014):

– A condition of other pathologies related to pain: rheumatoid and spinal arthritis.

The diagnosis of fibromyalgia is fundamentally clinical, at present there is no laboratory test that unequivocally confirms the presence of this pathology.

In addition to the realization of individual and family medical history, specialists pay special attention to the description of painful events, their characteristics, presentation, and duration. In addition, an essential point is the detection of other comorbid symptoms and pathologies (Laroche,  2014).

On the other hand, some experts, such as the American Pain Society (APS), recommence the performance of some complementary tests, such as blood @nalysis, to determine other possible pathologies. Normally, antinuclear antibodies, iron, vitamin D, platelets or the presence of thyroid hormones are examined  (Laroche, 2014).

The treatment of fibromyalgia, like other chronic pains, requires a multidisciplinary approach, characterized by pharmacological-@nalgesic therapy, physical therapy and psychological therapy (Laroche, 2014).

Pharmacological treatment is mainly used for the improvement of symptoms and secondary complications, some of the drugs used include antidepressants (Amitriptyline, Duloxetine or Fluoxetine), cyclobenzaprine, Pregabalin, tramadol, paracetamol, aninflamatorios (glucocorticoids, non-steroldal anti-inflammatories ) (Ministry of Health, Social Policy and Equality, 2011).

In addition, other types of therapies can also be used, such as thermotherapy, transcutaneous nerve stimulation, ultrasound, laser, or magnetorerapia (Ministry of Health, Social Policy, and Equality, 2011).

In the case of the psychological area, the most common approaches usually include cognitive-behavioral therapy and operant behavioral therapy, used primarily for work with behaviors related to episodes of pain, different coping strategies and self-efficacy (Ministry of Health, Social Policy and Equality, 2011).