The gerascophobia is irrational and excessive fear of growing old. It constitutes an anxiety disorder, reason why the fear experienced in this alteration is pathological.

All people can present a certain fear towards aging. However, this does not have to imply the presence of a psychopathological alteration or the development of gerascophobia.

Gerascophobia is a type of specific phobia not common in society. People suffering from this disorder have very high anxiety responses and a marked alteration of their behavior due to their fear of getting old.

It is a psychological alteration that does not remit. Therefore, it is highly important to treat it adequately in order to overcome it.

Gerascophobia is one of the most particular types of specific phobias that exist today. Specific phobias, as is well known, constitute a type of anxiety disorder motivated by the presence of a certain phobic fear.

Aging is a fact that all people experience at some point in their life. Which entails a series of circumstances such as deterioration of physical capacity, loss of functionality, change of lifestyle, etc.

The person with gerascophobia develops an irrational fear of aging, which is why this fact becomes their greatest fear. The fear is so high that it can significantly affect the behavior of the individual, their functionality and their quality of life.

The main symptomatology of gerascophobia is based on manifestations produced by anxiety. The fear of aging causes a high nervousness that translates into major alterations.

Anxiety disorders seriously affect the physical functioning of people, producing a series of alterations in the body.

In the case of gerascophobia, the physical symptoms are usually intense and serious, although in rare cases they end up constituting a panic attack.

The manifestations of gerascophobia at the physical level respond to the increased activity of the central nervous system that is experienced.

This increase in activity can cause a quite varied symptomatology, so that the physical alterations of the gerascophobia may be slightly different in each case.

Generally speaking, an individual suffering from this disorder will experience some of the following symptoms when exposed to their feared stimuli:

It is not usual for the individual with Gerascophobia to experience all the symptoms at once. However, it is common to experience a good part of them, with the increase in heart and respiratory rates being the most common symptoms. 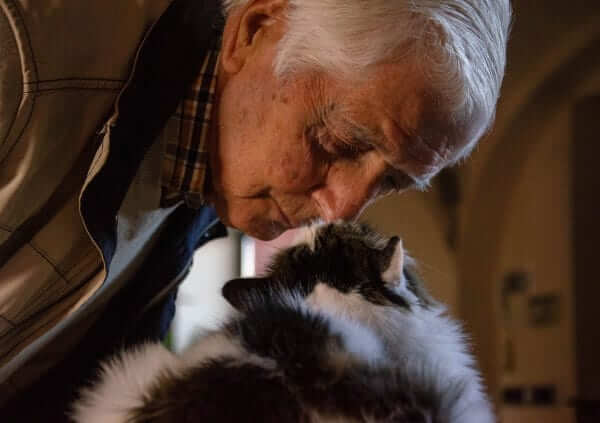 Cognitive disorders refer to the sequence of pathological thoughts that a person with gerascophobia develops.

These cognitions are closely related to aging and motivate and increase the experimentation of fear towards aging.

The negative thoughts that the person develops can be multiple and quite nonspecific. However, in all of them there is an important cognitive bias towards the negative consequences that aging brings.

Likewise, negative thoughts about personal abilities to cope with old age usually appear. Normally, a negative evaluation is usually made about the characteristics that one will have when he grows old.

The physical and cognitive symptoms that gerascophobia causes directly affect the person’s behavior.

In fact, the behavioral alteration of the gerascophobia can become serious and limit the quality of life and the functionality of the person.

The symptoms of behavior have to do with the efforts of individuals to escape their fears. That is, to prevent aging.

Nowadays it is not well established what behavioral alterations the gerascophobia entails. Mainly because these can be multiple and usually depend more on the personal characteristics of the individual than on the alteration itself.

However, constant reparative behaviors are common, initiation of anti-aging treatments, behaviors to avoid wear and tear or physical deterioration, etc.

At first glance these behaviors can seem healthy and healthy for a person. However, in gerascophobia they contain a high pathological component.

The person performs the activities to avoid discomfort instead of to achieve well-being, a reason that very often translates them into behavioral alterations.

What causes the symptoms of gerascophobia?

The alteration produced by gerascophobia has its origin in the fear of aging. The fear of getting old causes a high discomfort, which translates into the symptoms described above.

In this way, the main point of the pathology is the fear of aging. Likewise, the fear experienced is one of the basic points for its diagnosis.

In order to catalog the fear experienced as pathological and, therefore, related to gerascofobia, a series of main characteristics must be fulfilled:

The fear of aging does not belong to congruent processes. The subject with gerascophobia presents a fear that is not supported by rational thoughts.

Likewise, the fear of aging is not irrational only for third parties. The individual who suffers the disorder interprets his fear as incongruous, and is aware that it is not based on solid grounds.

The fear experienced in gerascophobia is beyond voluntary control. The person with this disorder is totally unable to control their feelings of fear, which appear automatically.

Likewise, the subject is unable to control the anxiety responses and the symptoms resulting from the pathology. For this reason, the only alternative that the person with gerascofobia has is to avoid those elements that cause discomfort (avoid aging).

The fear of gerascofobia is also characterized by its intensity, which is always excessively high.

The individual responds to the stimuli as if he experienced a high threat to his person, when in reality this is totally non-existent.

It leads to the avoidance of the feared stimulus

The person with Gerascofobia is totally unable to face their fears, so their only option is to escape from them.

Avoidance is the most common behavior in the disorder and is to stay away from those elements that are related to aging and cause fear.

The fear of gerascophobia is neither temporary nor temporary. This persists over time and is not experienced only in specific times or moments.

In fact, if fears of aging are experienced occasionally or transiently, it is highly probable that gerascophobia does not occur.

Likewise, the fear of the disorder is also not specific to a certain age. As soon as it develops, it appears permanent without remission, unless it is properly intervened.

The fear of this psychopathology does not allow the individual who experiences it to adapt better to his environment. In fact, this characteristic is vital to catalog any type of fear as benign and functional.

In this way, the fear of gerascophobia hinders the individual’s adaptation, causes negative consequences and, therefore, is pathological.

The etiology of specific phobias is, today, one of the main topics of interest for the scientific community.

In the study of anxiety and the resulting disorders, phobias are one of the best known and best researched alterations.

Today there is a high consensus in affirming that there is no single cause that causes the development of specific phobias. Rather, several factors that may play an important role have been described.

These factors are not always present and, in some cases, they can be more noticeable than others.

However, it is concluded that the combination of the following elements (which may occur to a greater or lesser extent) contributes to the development of the pathology.

Currently, it is postulated that the mechanism that best explains the acquisition of fear is the classical conditioning. That is, the fact of being exposed to situations that convey the idea of ​​fear.

In this sense, coexisting with people who have a high risk of aging, often comment on the dire consequences of becoming older or give much importance to staying young, are factors that can contribute to the development of gerascophobia.

Classical conditioning seems to be especially important during childhood, since that is when most fears are developed. However, these factors can play a relatively important role at any age.

Direct exposure is not the only mechanism by which fears can develop. In fact, the acquisition of information verbally or visually can also motivate the appearance of fears.

In this sense, being exposed to situations in which information is transmitted about the negative consequences of old age and the importance of staying away from it can contribute to the development of gerascofobia.

Although today there is not much data on the heritability of phobias, some authors indicate a relative presence of genetic factors in their development.

Thus, people with relatives with a history of specific phobias or other anxiety disorders may be more likely to develop gerascophobia.

Finally, certain elements of the way of thinking seem to have an important role not so much in the development but in the maintenance of the phobias.

Unrealistic beliefs about the damage that can be received, attentional biases towards threats or low perceptions of self-efficacy would be the most important components.

The psychological interventions are most indicated that gerascofobia, presenting higher rates than drug treatments effectively.

Specifically, the cognitive behavioral treatment is the psychological intervention that shows better results, since it allows to revert the majority of cases of specific phobia.

In this treatment, exposure is mainly used, a technique that consists of exposing the phobic individual to their feared elements.

Exposure is usually done gradually since the objective is that the subject remains before their phobic stimuli without being able to escape them.

Little by little the individual becomes accustomed to those elements that he fears so much, and learns to prevent his anxiety response.

To facilitate the process , relaxation techniques are usually added , since these allow to reduce the anxiety of the person and give him a state of serenity that helps him to face his fears.

Finally, when cognitive distortions and inadequate thoughts are condemned to aging, cognitive therapies can also be performed to manage and replace them.