Overcoming a phobia that prevents achieving goals in life or having a good quality of life is very important. If allowed to pass, it can increase in intensity and be more complicated to treat.

It may be that at some point in your life you have felt a great fear of a certain object or situation and that fear have made it difficult or impossible to carry out activities that you wanted at that time.

How to overcome a phobia

Remember that if you do not treat the problem, it may result in others more serious, such as depression, addiction, family problems, work problems, anxiety attacks, panic attacks…

If the phobia that you suffer is of less seriousness, you can surpass it with the steps that I am going to expose to you next.

My advice is that any type of phobia should be treated, since a fear that at first may seem insignificant, over time can grow into a disabling phobia.

10 steps to overcome a phobia

The first step in overcoming a phobia is to identify the object or situation you fear.

Take the time you need to identify your fear, as this step is key to getting over your phobia.

Talking about your fears with other people has many benefits: it helps you to identify your phobia, you relieve yourself, you receive advice, and you feel supported and clothed…

If in your loved ones you do not find the support you need, look for a therapy or group of help in which you feel comfortable and that helps you in your improvement.

I am sure that within your phobia there are different situations that generate more or less anxiety. For example, if you are afraid of dogs, you may have a slight anxiety about seeing a dog in the distance and a serious anxiety about it.

What you must do is a hierarchy in which you find all those different situations that generate fear ordered from less to greater intensity. Ideally there should be a minimum of ten situations.

At this point what is intended to achieve is that you reduce your fear in smaller fears to which it is easier to face you at first.

Doing some kind of relaxation exercise can help you deal with your phobia.

This exercise can be to visualize a pleasant scene, to perform some breathing exercise; meditation … what is important is that the exercise can be practiced at any time and discreetly.

Ideally, before exposing yourself to the dreaded object, you can do that exercise, which will help you to reduce your activation level and make it easier for you to deal with it.

At this point you must grasp your hierarchy of fears and expose yourself to the different situations in your imagination, visualizing them progressively.

It begins with the first, that is, the least anxiety that generates and begins to imagine you in that situation. It is normal that at first you feel some anxiety and tension, but do not worry, little by little it will decrease and you will feel as your muscles relax.

This exercise should be done with all the situations of your hierarchy and your goal is to help you, through the imagination, to have your activation level lower, in this way, when you go to face your fears in person you will be calmer.

The thoughts have a great power to make you feel in one way or another, so if we modify the thoughts that generate anxiety, insecurity and fear, it is likely that those emotions change to other more positive.

I encourage you to write down on paper those thoughts that come to you when you think about the dreaded situation, and to turn them into more positive thoughts that you can say to yourself when you face your phobia.

For example, the thought “I cannot do it” can become “little by little and with effort I can get it”. 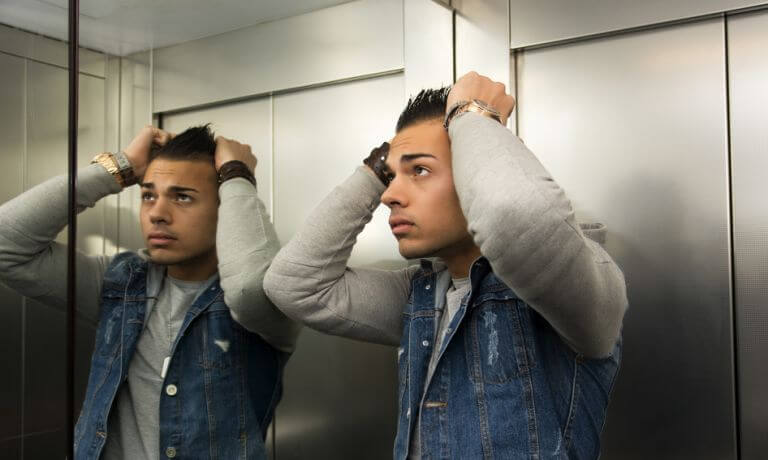 The time has come for you to put into practice all that you have learned in the previous steps and face in person the different situations in your hierarchy, that is, your fears.

As before, you should begin to expose yourself to your fears in a progressive way, for the situation that less anxiety generates. Do not force yourself, there is no hurry. Slow and satisfactory exposure is preferable to rapid and inadequate exposure.

When you have exposed yourself several times to a situation and notice that anxiety and fear have dropped considerably, move on to the next.

The goal of the exhibition is to gradually tolerate the feared object and the associated reactions of anxiety and fear are disappearing.

For any disorder it is very important that your life habits are healthy.

Exercise regularly, eat healthy, rest enough hours, and avoid the consumption of toxins … All this has repercussions on your well-being.

Many doctors and psychiatrists prescribe anxiolytics and antidepressants to relieve the symptoms of some phobias.

The consumption of these drugs should only be done under medical supervision, as an inappropriate use of them can cause dependence and unwanted consequences.

To overcome a phobia you have to have patience, since they do not disappear immediately, but involve time and effort.

Depending on the severity of the phobia the treatment can last several weeks or months. The important thing is to strive and reinforce all the achievements that one is achieving.

With patience, effort and desire, you can overcome all your fears.

What is a phobia?

A phobia is an anxiety disorder that consists of an intense, disproportionate and persistent fear of the presence or anticipation of an object, animal or situation that poses little or no real danger to the affected person.

The person who has a phobia is aware of his situation, i.e. he knows that his fear is excessive and irrational, which has no logic, but still cannot help feeling that intense fear when it encounters the object or the dreaded situation.

The severity of the phobias can vary, that is, in some people it generates a slight uneasiness while in others the emotional reaction is of such intensity that generates a great feeling of fear, anxiety crisis and even panic attacks.

These emotional reactions can be triggered by the presence or the mere imagination of what is feared.

For this reason people with phobic disorder try to avoid at all costs what causes them fear, but when this is not possible and they have to face what they fear, they do it with a lot of fear, discomfort and anxiety.

The avoidance of phobic stimulus interferes greatly in the quality of life of the affected person, preventing him from carrying out daily activities such as  driving, traveling, being in open or closed spaces, being with animals …

In the end, the avoidance of the dreaded stimulus ends up impacting on work activity, family relationships, couples, friends…

This disorder affects a large percentage of the population. Experts point out that approximately one in twenty people have some kind of phobia.

Phobias are more common in women than in men.

People can develop phobias towards anything and any situation, so if I list all types of phobias  would never end, which is why I will cite a few.

There are certain phobias that are more common than others among the population, such as:

There are also many others less common and more striking types of phobias, such as:

Most likely, you identify a family member, friend, or even yourself in one of the phobias I just named and it is more frequent than

I must emphasize that there is another group of phobias that are not characterized by the intense fear and fear they generate, if not by a feeling of hatred, rejection and

Disapproval towards a certain group, as is the case of h0m0phobia and xenophobia.

How do phobias arise?

Phobias arise in childhood and adolescence and tend to stay in adulthood.

They can be acquired in various ways, for example by observing other phobic people, as with children who develop the same phobias as their parents or close relatives.

Through the association of unpleasant emotions with the object or situation with which you are relating at that time. For example by feeling anxiety and fear after being locked in an elevator.

For the paternal overprotection along with the reinforcement of the fears. For example parents who do not allow their child to approach any dog ​​and reinforce it when the child avoids contact with these animals.

Or by the experience of a traumatic situation. The person lives a situation that is traumatic for her and from that moment develops a phobia related to what happened.

This way, you can be afraid of the spiders because your mother has it, afraid of the elevators because you were locked in one, fear of the dogs  because this way you have been transmitted to you by your parents and fear to drive after having a car accident.

As you can see phobias are acquired through learning, which means that they can be overcome, as we will see later.

What happens when the person encounters what he fears?

All these reactions are joined:

People feel a set of very unpleasant emotions, reactions and feelings that push them to carry out the avoidance of what they fear.