The emotional disorders have undergone changes and modifications in their classification in the Diagnostic Manual of Mental Disorders (DSM-IV and DSM-V) by the Psychiatric Association of the United States.

Types of Emotional Disturbances in Children and Adults

In order to be recognized as major depressive disorder you have to feel at least five of the symptoms described below and for duration of at least two weeks.

The average age of onset of major depression is usually around 25 years of age.

To be diagnosed of dysthymia, a depressed mood must be given most of the day on most days for at least two years without the patient being symptom-free for more than two months in a row.

In addition, you have to feel two or more of the following symptoms:

The average age of onset of dysthymia is somewhat earlier than major depression, around 20 years of age.

The bipolar disorder is manic tendency to alternate with major depressive episodes in a round of endless roller coaster episodes goes from the top of the euphoria to the depths of despair.

Within bipolar disorder we can distinguish: bipolar I disorder and bipolar II disorder. Both types are the same; they differ only in one aspect of the manic episode.

Despite this differentiation, both symptoms occur in the same way and the following criteria must be met:

Symptoms of a manic and hippomanic episode

In addition to an irritable, abnormal and expansive mood, there must be at least three of the following symptoms:

In hypomania these symptoms are not so pronounced.

The average age of onset of bipolar I disorder is usually at 18 years of age, and for bipolar II at 22 years. However, in both cases there are cases of onset in infancy.

The cyclothymiacs disorder is one (although chronic) milder version of bipolar disorder II.

To be diagnosed of cyclothymiacs disorder you must comply with the presence of at least two years of the following symptoms:

Several studies agree that the average age of onset of cyclothymiacs is quite early, between 12 and 14 years of age.

In general there is a lot of controversy and uncertainty as to knowing what the causes that lead to emotional disorders are. However, it has been possible to investigate certain factors that influence the time of suffering them.

It is important to understand that a single factor alone is not enough when developing an emotional disorder, but it is the accumulation of several factors that trigger it. 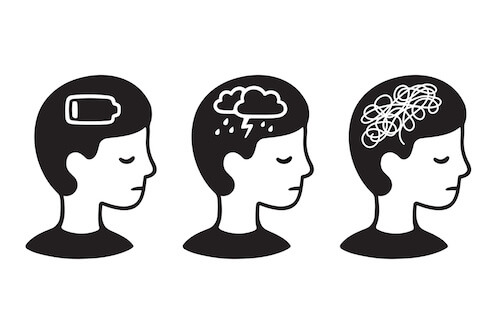 There is an increased risk of emotional distress when there is a family history of the disease, indicating that a biological predisposition may have been inherited.

According to studies, people with relatives with mood disorders are 2 to 3 times more likely to develop such a disorder (Garson, 1990).

However, severe depression can also occur in people who have no family history of the disease.

This suggests that there are additional factors that can cause depression, whether biochemical or environmental factors that produce stress, and other psychosocial factors.

Brain biochemistry has been shown to play a significant role in depressive disorders.

Depressed individuals have reduced slow-wave sleep, which is the deepest and most restful part of sleep.

An interesting finding is that depriving depressed sleep patients, particularly during the second half of the night, generates a temporary improvement in their condition, although depression returns when patients return to normal sleep again.

Specifically in bipolar disorder, they have found that these patients have a greater sensitivity to light (Nurnberg et al., 1988), which means that they exhibit greater suppression of melatonin when exposed to light at night.

Between 60% and 80% of the origin of emotional disorders are attributed to psychological experiences. Stress and trauma are among the most striking contributions to the etiology of psychological disorders.

When asking patients about significant events experienced before they suffered from depression, most report having lost their job, having divorced, having a child, having undertaken a career…

This does not mean that the origin of the emotional disorder is directly related to this specific cause but that the person already had a vulnerability to depression and this stressful situation has triggered depression.

The origin of any emotional disorder has more to do with a trauma or with significant relationships experienced as threatening. However, they are difficult to know because often the person himself has covered those painful memories.

People with negative mental patterns, low self-esteem, a sense of lack of control over life circumstances, and a tendency for excessive worry are more likely to suffer from depression.

The arbitrary inference and overgeneralization are two common cognitive errors in depressed people. Arbitrary inference is evident when an individual highlights the negative aspects of a situation rather than the positive ones.

Overgeneralization is a type of thinking that is characterized by the tendency to draw a general conclusion from a specific event that has happened to us and to which, unconsciously, we create a whole philosophy of life that is not adaptive.

Negative thought patterns typically appear to be established in childhood or adolescence, and over time form a pattern of depressive thinking.

These drugs work by increasing in the brain the activity and levels of certain chemicals called neurotransmitters, which help to improve your mood.

Different types of drugs have different modes of action but work equally well. The important thing is that with the help of your doctor you find the drug that has the best results in your body.

Lithium is a common salt present in the natural environment. It is found in the water we drink, in very small quantities to have a very important effect.

Lithium is used as a mood-regulating drug effective for the prevention and treatment of manic episodes of bipolar disorder. However, the side effects of the therapeutic doses are potentially more serious than the other antidepressants.

Researchers are not sure how lithium works. What they have observed is that 30 and 60% of bipolar patients respond very well to lithium initially, between 30 and 50% show a partial response and between 10 and 20% have a poor response.

For increased efficacy of bipolar disorders, antidepressants should also be prescribed to control depressive episodes.

The antipsychotic drugs like Haloperidol are also used for bipolar disorder in patients who have not received a response to lithium.

Psychotherapy has proven effective in treating depression and to a lesser extent bipolar disorder (although necessary).

In bipolar or cyclothymiacs disorder, the treatment of choice is the combination of drugs with psychotherapy.

In the case of depression and dysthymia, psychotherapy may be sufficient, except in the most severe forms that a combined treatment with drugs is recommended.

In a US study by the Consumer Reports on the effectiveness of psychological therapy, 54% felt that the therapy had helped them a lot and 36% had helped them.

A similar study performed in Spain, 4.78 out of 6 considered the treatment to be effective, and 4.59 out of 6 that the therapy solved the reason for their consultation.

When someone does not respond to medication (or in very serious cases), clinicians may consider electroconvulsive therapy.

During electroconvulsive therapy (ECT), electric current causes a seizure in the brain. Doctors believe that convulsive activity can help the brain “reconnect” itself, which helps relieve symptoms.

It is a practice that has received much controversy because of the side effects, such as memory loss, which can cause. Therefore, it only applies in severe cases

In which the other treatments have not worked.

However, in recent years the amount of electricity used in the procedure has been considerably reduced. This has greatly reduced

The side effects of this procedure, including memory loss.

Phototherapy has proven its efficacy as an additional treatment for seasonal affective disorder or seasonal depression. That is, a depression that only takes place in a season of the year and occurs every year in that same period.

Seasonal depression usually occurs in winter but can also occur in spring or summer. For these people, sitting for 30 minutes a day in front of a light of a certain light intensity helps them to treat depression.